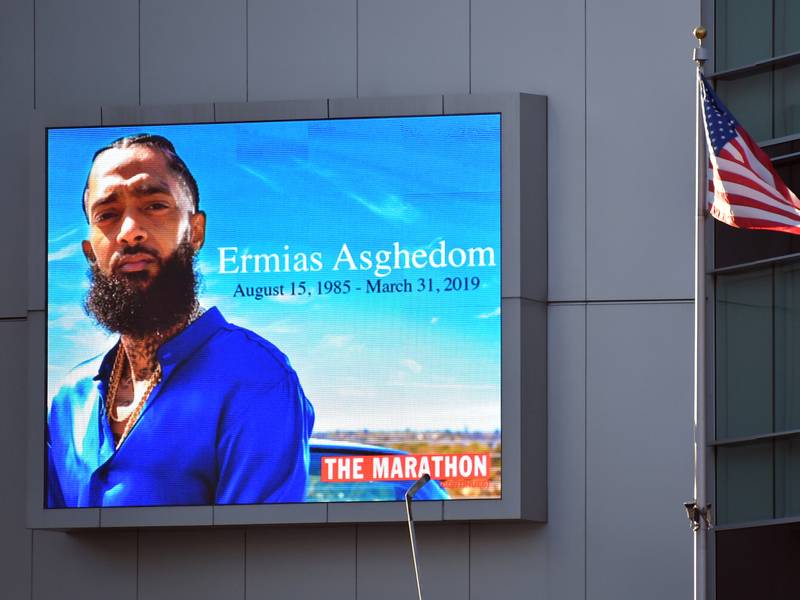 More 20,000 friends, colleagues, family members, performers and fans gathered at the Staples Center for a televised memorial service to celebrate the life and legacy of Nipsey Hussle. The late rapper, born Ermias Joseph Asghedom, made a great impact not only in the Hip Hop world, but also in his Los Angeles community.

The ceremony opened with songs from his Grammy-nominated album Victory Lap.

Minister Reid Rich and Pastor Shep Crawford began the service, followed by a slideshow of Nipsey’s life while Frank Sinatra’s “My Way” played in the background.

Longtime friend Karen Civil read a letter from Barak Obama, sharing his words with those in attendance and watching at home. Obama praised Hussle’s efforts in lifting and investing in his Crenshaw and Eritrean-American community, writing, “He set an example for young people to follow and is a legacy worthy of celebration.”

Thank you to @BarackObama for sending this letter for me to read celebrating @NipseyHussle’s life & legacy. ? pic.twitter.com/qwEjjb6O9d

Civil’s reading was followed by passionate words from Minister Louis Farrakhan and Father Thomas Uwal from Eritrea, the home country of Nipsey’s father.

Nipsey’s children Emani and Kross, along with Lauren London’s son Cameron Carter, also appeared on stage. Carter recalled being visited by Nipsey in a dream.

“I was in paradise and I was playing in the ocean water when Ermias popped up right behind me,” he said. “I realized that Ermias told me what heaven was like. He told me it was paradise.”

Carter also got the audience to chant “Respect!” He told the crowd it was something Nipsey said every morning.

London, the slain rapper’s girlfriend, then took the stage and began her powerful speech.

“Never was I prepared for anything like this, so bear with me y’all,” she said.

She mourned for their son Kross, saying, “My pain is for my two year old, who probably won’t remember how much his dad loved him.”

London also read a text message she’d sent Hussle one morning while she watched him sleep.

The text, which was printed in its entirety on the service pamphlet, read: “You’ve made me into more of a woman. You’ve given me an opportunity to really love a man. You’ve been with me while I’ve been sick. Through my fears.”

It continued, “You’ve been my turn up and my church. I wouldn’t want to go thru this journey with anyone but you.”

“You’ve been my turn up and my church” ? a sweet text from @LaurenLondon to @NipseyHussle featured in the funeral program. pic.twitter.com/uAuv5Rqpdi

Snoop Dogg And YG Reflect On Nipsey’s Friendship And Career

A choked up Snoop Dogg reflected on his good times with Nipsey, bringing laughs to the crowd. He remembered the late MC bringing him a mixtape and commended Nipsey’s parents for raising their son to be an influential leader.

Before saluting the casket, Snoop pointed out Nipsey’s role as a peacemaker — a Crip who made songs and friendships with Bloods.

YG then emerged as an example of what Snoop said.

“That’s my brother from the other color,” the Compton-bred rapper told the crowd.

YG, a Blood, spoke about their bond and reflected on Nipsey’s positive influence on him.

The legendary Stevie Wonder fulfilled a wish that Nipsey had shared on his 2016 song “Ocean Views.” On the track, Nipsey rapped about his death and dropped the following line: “Play a Stevie Wonder song, smoke some flight bro.”

Wonder expressed the need for stronger gun laws and reminisced about meeting Nipsey before performing “Rocket Love” and a rendition of Eric Clapton’s “Tears In Heaven.”

“I was told that this was one of his favorite songs that I had done,” Wonder said of “Rocket Love.”

Earlier in the proceedings, Jhené Aiko sang a solemn version of her song “Eternal Sunshine” at the memorial. Marsha Ambrosius also performed “Fly Like a Bird” and Anthony Hamilton sang “Do You Feel Me.”

Nipsey Hussle rapping on "Ocean Views" what he wants for his funeral: "Play a Stevie Wonder song, smoke some flight bro."