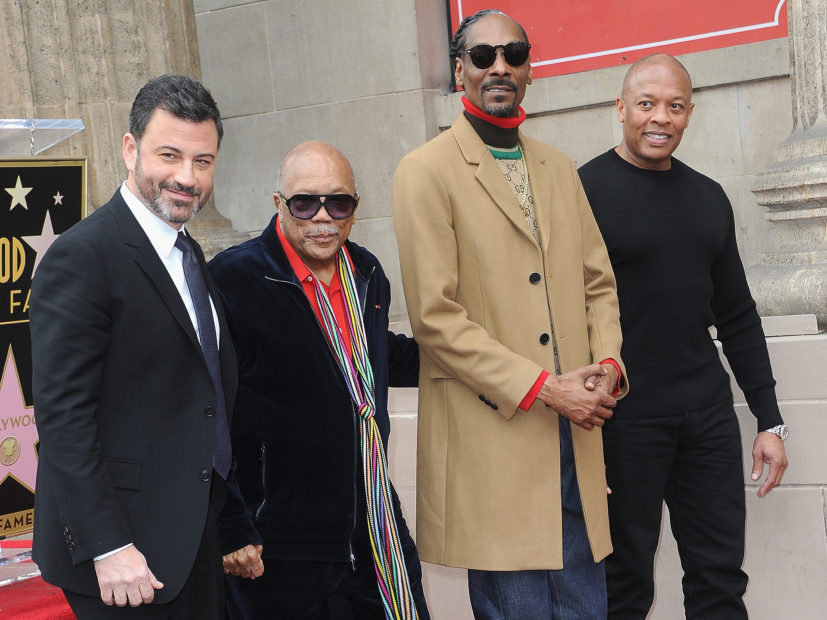 From conquering Gangsta Rap to a cooking show with Martha Stewart, Snoop Dogg has established himself as one of the biggest stars in pop culture, crossing every media platform currently in existence. Now, Tha Doggfather can add one more accolade to his trophy case as joined entertainment’s elite with his newly minted star on the Hollywood Walk of Fame on Monday (November 19).

Snoop, who celebrated the honor almost 25 years to the day after the release of his groundbreaking debut album Doggystyle, was introduced fittingly by his mentor and longtime producer Dr. Dre, Quincy Jones and neighborhood employee, Jimmy Kimmel. In addition to his family who all made the journey out to Hollywood and Highland, Snoop was surrounded by many of the people who helped him along on his path to success. It was a who’s who of celebrities including Kareem Abdul-Jabbar, Pharrell Williams, Battlecat, Terrace Martin, Darris Love, Jeannie Buss, DJ Pooh, Big Boy, Bishop Don “Magic” Juan, John Singleton and Warren G.

It was a day filled with stories and HipHopDX was on site to hear them all, and we compiled five notables from Snoop’s big day.

In addition to the ceremony taking place just outside of Jimmy Kimmel’s studio, the two will now also be inexorably linked as their stars are right next to each other. Kimmel, who started off by acknowledging Dr. Dre and Quincy Jones’ respective legend statuses, admitted, “I don’t know how I follow the two greatest record producers of all time.” Kimmel then went into the little-known story of how he interviewed Snoop while at famed L.A. rock n’ roll radio station KROQ.

“We met in 1994,” he recalled. “I was working at KROQ a radio station here in town that did not play Snoop’s music but I loved Snoop and I loved his music and I wanted him to be on our show, so we called and asked. We were excited. We didn’t know what to expect. We wanted to make a good impression. To be honest, at that time we were worried he might shoot us if we didn’t,” said Kimmel. “So I called a friend who had a friend who had another friend who sold what in those days was called marijuana, and I bought some of it and rolled it up and we put the joints in a prescription bottle and when Snoop showed up at the radio station I gave it to him and he was very happy.

“He said — and I remember exactly what he said — ‘now that’s my kind of medicine’ and we’ve been homies ever since.”

Anyone that has followed Snoop from day one knows that if it wasn’t for Warren G, Snoop never would have met Dr. Dre. The “Regulate” MC once even pulled Snoop’s rhymes out of the trash when the D-O-double-G was ready to quit rap. On this day, Snoop gave an extra special shout out to the man that helped spark his career.

No Mention Of Suge Knight, Master P Or The Death Row Chain

Ever since the disbanding of Death Row’s original roster in the late 90s, Snoop and Suge have had a rocky relationship, to say the least. Snoop went over to Master P’s No Limit Records and Suge would continually taunt his former employee, once even leaking his home address to the public. The two reconciled and were spotted at a club together back in 2013 but now that Suge could potentially spend the rest of his life in jail, the chance of any larger scale reunion is slim to none. While Snoop didn’t mention Suge or Master P in his speech, if you look closely he was wearing a Death Row chain. What makes this even more interesting is that Dr. Dre, who Suge allegedly tried to confront on the set of Straight Outta Compton was in attendance. It is also worth mentioning that Daz and Kurupt were not in attendance.

Dr. Dre On How Snoop Motivated Him Through Two of His Biggest Achievements

“I thought all that we had to do was go back in the studio and do the same exact thing that we did when we made The Chronic, but by that time gang banging showed up, there was a lot of money floating around, but me and Snoop, we kept our eyes on the prize and we knew that this record Doggystyle had to be better or at least as good as The Chronic,” noted Dre. “So we spent 10 months trying to work on that album throughout some of the worst situations that you could imagine in a studio. And I’m talking about some bloody situations at times and we managed to get through it all, through all of that bullshit and here we are right now, doing this like this.”

Congratulations to Snoop Dogg once again!