Our Favorite Non-Rap Artists Of 2015 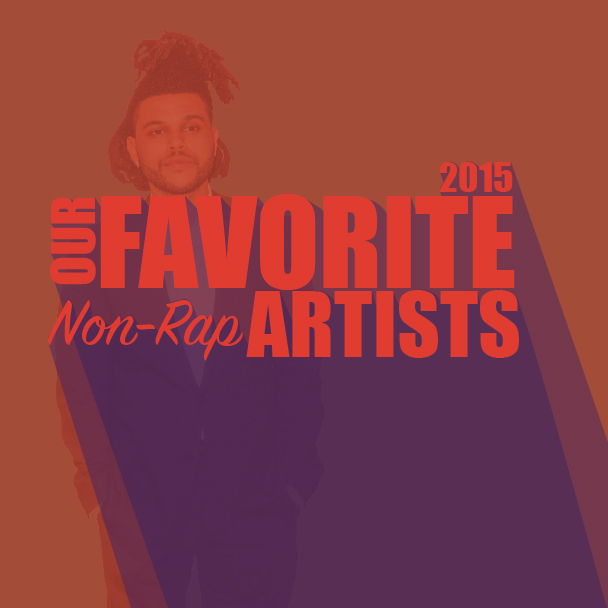 2015 was a spectacular year for music in general, not just in Hip Hop. It showed in the swath of diversity chomping at that drum in your ear, and it made for moments both big and small seem awash in the arpeggio. There’s a selfish quality to it all when a year is this good. You wish to cup it in your hands like fireflies in the night, but you must inevitably decouple yourself if you wish the music to shine bright into the future.

For us, all of these artists represented some of the midpoint’s celestial lights. From the down-home twang and soul of the Alabama Shakes to the drug infested wonderland of The Weeknd, all of these artists add something indelible to our lives. A quality of time you can’t take back but that you will remember in broken moments long into the now.

For his 2015 album Beauty Behind The Madness, The Weeknd didn’t just up the ante on blending modern Hip Hop swagger with druggy R&B. Instead, he completely overhauled his vocal timbre and embraced none other than the “King of Pop” Michael Jackson. Somewhere between the pure pop welcome of developing a style favoring MJ-styled soul cooing and being a thoroughly debased soul badman the likes of which pop hasn’t seen since Bobby Brown, tunes like “The Hills,” “Tell Your Friends” and Billboard #1 Hot 100 single “Can’t Feel My Face” were equal parts dangerous and inviting. In embracing the most powerful elements of two very different environments, it’s when they combined that The Weeknd excelled.

After emerging from the success of singles like 2008 hit “Bust Your Windows,” it’s on her third album Reality Show that R&B fanatics truly got their chance to reconnect with a now matured and more empowered than ever Jazmine Sullivan. In successfully navigating being an old soul willing to embrace new sounds, songs like “Best R&B Song” Grammy-nominated  “Let It Burn” shone. When someone with Sullivan’s voice is able to put that tool to work on a production that samples After 7’s “Ready or Not,” what results are beautiful moments where everyone uniquely connects to a song and, amazingly enough, understands the same message.

Australian soul quartet Hiatus Kaiyote have been Southern Hemisphere superstars and Northern Hemisphere indie favorites for a half-decade. With 2015 album Choose Your Weapon, though, the idea of the band emerging from “least anticipated” to “most wanted” status worldwide feels rather imminent. Intriguingly enough, related to Hiatus Kaiyote’s crossover, the new album peaked at #11 on Billboard’s R&B album chart. One close listen to shimmering free jazz-meets-funk single “Breathing Underwater” later, and you’re already piqued for more. Left field hasn’t sounded this sumptuous in quite some time.

It’s been forty years since slow-growing psychedelic rock that’s similar to the sounds favored by Aussie band Tame Impala has been so incredibly well received by a beat and breaks-trending community of music fanatics. Tame Impala’s album Currents took two years to produce, and dropped in July 2015, debuting at #1 in Australia and a strong #4 in the United States. When listeners worldwide wrapped their ears around the deft blend of four-on-the-floor drums, ethereal grooves, reverb and pure funk, it connected. Sounding like what would happen if you left Pink Floyd, Miles Davis and a drum machine in a locked studio for a month, it’s a surefire winner of a sound.

After Lady Gaga released a failed album bearing the title of Artpop in 2013, the intersection of artistic creativity and top-40 urban pop needed the brusque yet beautiful reality of UK-based vocalist FKA Twigs. 2015 saw Twigs’ M3LL155X EP strike all of the nerves as the 16-minute video clip that accompanied the EP was described as a “jaw-dropping video statement” by Rolling Stone. The EP’s name is pronounced as “Melissa,” which is the name shared by Twigs’ personal female energy. When an artist of Twigs’ caliber is willing to take the types of artistic risks that she’s taking, it’s more than important. It’s triumphant.

Kehlani’s “The Way” was not so much a breakout moment because it was a duet with rap star Chance The Rapper as it was great because the San Francisco-based soul stirrer stood out on her own accord. There’s an inherent sensitivity in Kehlani’s You Should Be Here album that defines what it is to be young, female and lovelorn in the modern era. From the eponymous single to the aforementioned “The Way” and more, her self-released and now Grammy nominated album brilliantly strikes every intensely meaningful chord and yanks at every heartstring, too.

At present, the forefront of the “rock’s not dead” movement is defined by the leadership of brass vocals of Alabama Shakes frontwoman Brittany Howard. In the band following up their major label debut album Boys and Girls with 2015’s now nearly platinum-selling Sound and Color, they showed an impressive sustainability that laughed in the face of mainstream logic stating that Day-Glo festivals and Hip Hop swagger wholly define pop music’s future. The thumping, twanging and garage-style groove of singles like “Don’t Wanna Fight” allowed the Alabama Shakes’ star-making turn to evolve from surprise to meeting expectations.

Veteran house music producer and band dude Jamie xx exhumed the ghosts of the UK’s ‘70s era Northern Soul parties and ‘90s garage/club vibes on US, UK, Irish and Australian dance chart-topping 2015 album In Colour. Songs like “I Know There’s Gonna Be (Good Times)” took ‘70s soul favorites The Persuasions hit “Good Times” and blended it with the modern tones of dancehall toaster Popcaan and Dirty South sing-warbler Young Thug and created an inarguable masterpiece of a song. Furthermore, keep digging into the record and pumping house jam “All Under One Roof Raving” and soulful groove “Loud Places” definitely have that fashion-meets-funk classic ‘90s garage appeal, too. A man for all seasons and feels, Jamie xx is a winner.

Matt and Syd and anyone else who’d sit at the table made The Internet’s Ego Trip a warm summer night spent in. It reeked of wafted smoke angling upward, undulating around dreadlocks in Brooklyn tenements or L.A. hovels. Thundercat put his magical E.T. finger on bass and helped anchor a record that made love to you as you listened to it. That’s two in a row for the Odd Future offshoot. And now that the main band won’t ever, ever be getting back together they are, in a way, all we have to remind us of a crackling energy made still as fame calcified their teenage rage into I Don’t Like Shit, I Don’t Go Outside, and Tyler, The Creator’s Cherry Bomb.

Far from mainstream R&B’s beaten path exists Chi-town’s Jeremih, who by edging back towards pop’s mainstream in 2015 may have finally eclipsed R Kelly as the Windy City’s favorite modern soul man. The crooner’s 2015 closed with third album Late Nights, which followed a series of singles that achieved increasingly heightened levels of acclaim. The most exciting of the 2015 lot may have been platinum-selling J. Cole collaboration “Planes,” which in being ambient, yet intense set a great mood and feel on which Jeremih’s vocal skills could ideally shine.

Germans would best refer to what makes NYC-based producer-vocalist Boots’ sound succeed as “sturm und drang,” or “storm and stress.” There’s an organized and seductive confusion inherent in his productions as if pop expectations are always one second away from strangling the manic melodies and heaving bass lines he wants to employ in his sound. Famed for his role as a producer on Beyonce’s 2013-released and industry “disrupting” eponymous and multi-platinum selling fifth album, tracks like “C.U.R.E.” (from his Aquaria album) and February released Motorcycle Jesus EP lead “Mercy” are as dangerous as they are sensuous and rhythmic. He’s exciting to hear and likely primed for much more (than he’s already impressively accomplished).

Phonte and Nicolay are perennial underground stalwarts, and on 2015 album Tales from the Land of Milk and Honey, the do nothing more than what they’ve always done, which is show and prove the eternal link between organic jazz fusion and Hip Hop style. Classic funk and indie rap purists found their way to the dancefloor as well with this record as modern pop’s EDM turn even found their way into the boom bap basement. Elements of the Minneapolis sound, New Jack swing, and tons of modern classic soul sounds are here and allowed the act to expand their appeal, retain their core fanbase and excel.

The space between festival-ready EDM turn-up vibes and R&B needed a hero, and in 2015, his name was Bryson Tiller. No, quite literally his October 2015-released album is entitled Trapsoul, and Billboard Hot 100 chart Top 20-peaking single “Don’t” set a standard for Tiller as an artist that follow-up singles like “Exchange” and album production from the likes of Soulection-affiliated baile-trap producer Sango and Timbaland certainly intend to follow. With dance’s dalliance with the bando not going anywhere anytime soon, Tiller’s a likely star on the rise.

Marcus K. Dowling is a Washington, DC-based freelance journalist with nearly two decades of experience covering music and popular culture. Follow him on Twitter at @marcuskdowling.