Kehlani - You Should Be Here 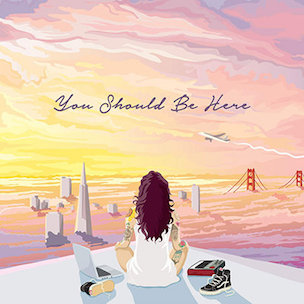 Female R & B’s decade-long search for the artist who will succeed in embodying the spirit, style and overall excellence of Lauryn Hill now turns to Oakland, California, the home of lovelorn and honest 20-year old vocalist Kehlani. Her greatest talent is showing an inkling of understanding the power apparent in the legendary Ms. Hill’s lyricism being borne of life lessons. Thus, Kehlani’s debut album You Should Be Here is a fine start in the young performer putting together the pieces of a career that could possibly exceed that of the one-time Fugees member.

Where this album excels is in the celebration of youth’s insecurities and dichotomies. Kehlani’s 20 and fresh off a breakup. So, this album’s best lesson is that a young woman should not lose “parts of [herself] to niggas,” as she says in “Niggas,” the mixtapes best (of many) kiss-off anthems. Jahaan Sweet also showcases his excellent production via two other agitated ballads, “How That Taste” and “Jealous.” Both of these tracks show Sweet to be quite the well-versed student of early 2000s production legend Timbaland’s work on Missy Elliott’s Miss E…So Addictive album, especially in the teardrop-style bassline driven orchestral grooves like “Take Away.” However, he gets a pass here because Kehlani’s ability to weave a story around a well-worn production concept actually takes tracks out of their comfort zone and allows them to nestle in untouched spaces in our hearts.

Just as with heartbreak there’s also love, and as Kehlani has confirmed with Billboard, tracks like the torch song title track, Chance the Rapper featured “The Way” and crooner BJ the Chicago Kid’s collaboration for “Down For You” are all stupendous showcases of teenage-to-adult love that make us all want to fall for that first man or woman that isn’t a girl or boy. The emphatic expression of euphoria that is the hook of synth-driven smash “You Should Be Here”could be R&B’s most exciting moment of 2015 so-far.

In some of her best material coming alongside collaborators Chance the Rapper and BJ the Chicago Kid, Kehlani differentiates herself from the oh-so-real and oftentimes dispassionate Lauryn Hill. Kehlani’s also 20 and in the throes of love, so “Down For You’s” confusion about the space between friends and lovers and “staying up all night losing sleep over [her beau]” are far more the fanciful and not-so-reality based “Can’t Take My Eyes Off Of You” from 1998’s Miseducation of Lauryn Hill as compared to Lauryn’s “Ex-Factor” reality on the same album. New love is all about being sugar and spice, so Kehlani’s effusive performances being met with similar youthful exuberance from her young male collaborators is certainly meeting expectations.

The presence of trap-based rhythms on roughly half of this album is certainly inspired by current pop norms, and actually succeeds when Chance the Rapper drops into a dragged out flow on “The Way.” The Windy City star oozes syrupy sweet charisma onto the track that blends with Kehlani’s glee to make for something truly special. However, tracks like “Runnin’” feel less-than impacting, snares couched around the delicate instrument that is Kehlani’s voice sounding so dissonant as to lessen the impact of her excellent storytelling abilities. The soul artist is bold enough to end the album with “Alive,” though, — a jaunty guitar ballad that’s more Sheryl Crow than Cheryl “Pepsii” Riley — and dive knee deep into throwback Stax-style gospel pop for “Bright,” an uplifting anthem for put-upon and otherwise troubled youth should be more the focus of this album, and ultimately her career, too. Kehlani is bigger than pop standards, and making music with a more timeless appeal would be best serving her aspirations for success and sustainable longevity as an artist, too.

Let’s consider the youthful blend of the pensive and the oh-so-excited that’s presented on You Should Be Here as the start of something all of Kehlani’s doing. While, yes, she’s certainly been blessed with the ability to walk some of the same paths as those who have inspired her career, the ability for Kehlani to uniquely become more than the sum of the past of female rhythm and blues is apparent, and is a reality worth seeing eventually come to fruition.