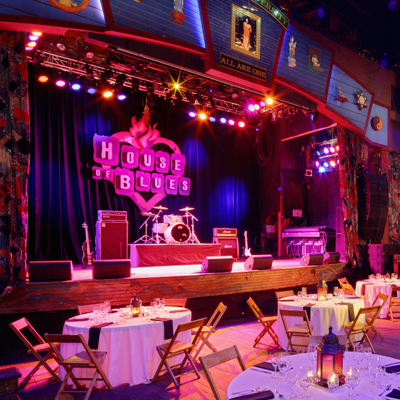 From the time it opened it’s doors in 1994, The House of Blues Los Angeles became as iconic as the names that would grace its marquee. Now after twenty years and hundreds of shows later, the three-story club that sits on a hill, surrounded by The Mondrian (RIP Pimp C) and fittingly the world famous Comedy store, which has helped launch the careers of some of the world’s most well-known stand-ups from Richard Pryor to Robin Williams.

Like its neighbor to the north, the House of Blues saw a lot of budding talent rise from incipiency to global stardom. Kevin Morrow, who currently manages MC/slam poet George Watsky, was the talent buyer for HOB from  the time the club opened until 2006 when he bequeathed the role to Paul McGuigan who held it down until August 7, 2015 when it closed its doors for good to make way for new condos on the new look and dangerously-close-to-being-neutered Sunset Strip.

Morrow and McGuigan were both kind enough to share some of those legendary moments with HipHopDX. For Morrow it was a time of tension as east versus west was just starting to heat up when he got called upon to help Def Jam to showcase some of their nicest and newest artists to the world. But then that night came in when that dude  Suge Knight came in.

“We had the Def Jam parties with all of their artists which featured everyone from Def Jam, we had shows with some East Coast artists where the LAPD Organized Crime Task Force [AKA the ‘Hip Hop Police’] came to us and said that there was chatter amongst the Bloods about coming in because that was when the East Coast, West Coast tension was going strong and they picked up some intel that something might go down,” Morrow recalled. “One year, I think it was the third party we did for them and it was getting kinda dicey between Suge Knight and Death Row, and anyone from the East Coast. The Def Jam people didn’t want Suge there cause they said it was gonna be a distraction because stuff tended to follow him around. Since it was a private event they didn’t have to let him in, but sure enough he showed up and we had to tell him they couldn’t come in and he said he was coming in and we said he wasn’t. It went back and forth and well, he didn’t come in that night. Thank God he didn’t push it!

While Suge may have been persona non grata that night, Morrow credited the embattled mogul with one of the club’s most legendary nights.

“Everyone from Death Row was there. It was Tupac, Dre, it was Snoop, I think Ice Cube. There had to be 30 people on stage. Suge was up there. We did it on the 4th of July, and Suge wanted to do a show to prove to the world that he’s a real businessman and we could pull this off without any incidents and we did the show and it was great. I mean Pac was just on.”

Morrow became friends with the late rapper and one night even had to call on him to save West Hollywood from a night that almost turned turbulent.

“Pac was a friend of the club’s, and he helped me a couple different times. He would come to shows whether it was The Fugees or Public Enemy, you name it. He came to all the hip hop shows if he wasn’t on the road. There was this one time that there was a bunch of Bloods outside and the cops were really afraid, cause there had to be 20 or 30 guys and the cops were scared to really get into it and deal with them and they were kicking on the door and the police came to me and said ‘We don’t wanna start a riot here but these guys gotta go.’ I said ‘What do you want me to do have my security guys deal with it? That’s not gonna be good.’ These guys just didn’t give a shit. The police were starting to call back up and the helicopters were coming and they were starting to shoot, light it up and Tupac just so happened to walk up. He said ‘Can I go into the show?’ It was The Fugees actually and I said ‘Yeah man you can go into the show, can you help me out?’ and he said, ‘Yeah, what do you need?’ I said these guys won’t leave. The police are getting a little nervous and getting a little antsy and they might listen to you. He walks over to them screams a bunch of profanities at the top of his lungs, he yells ‘Get over here,’ and he starts talking to them telling them If you don’t leave my man here ain’t gonna be able to do any more of these shows, the police are gonna get a little crazy. All y’all are gonna have to leave. Please! do me a favor and leave,’ and everyone was like ‘Man, cool Pac. We’re outta here,’ and they left and the show went on.”

When Eminem burst onto the scene in 1998 the world was ready for him to prove his star status, but according to Morrow that first show had him a worried about the future of Slim Shady.

“That first show that Eminem did which was really just him on stage playing his album [The Slim Shady LP] and he’d rap a little bit to his record. It was a partial performance but it was more just him talking about the record. It was his first record so he hadn’t broken yet. He had partied a little too hard and he was having trouble on stage. He got through it but I remember calling [Em’s agent] Cara Lewis and saying ‘I just don’t know about Em, he’s so talented but he was so drunk I don’t know if he’s gonna make it.’ Of course he went on to become one of the biggest stars in Hip Hop history. He and I have become friends.” Morrow recalled. “I actually would later do shows with him and Jay Z at Yankee Stadium and I did other shows with him at House of Blues. It was just somebody at the beginning of their career learning how to handle things coming at them so fast. What actually happened later was he did two shows in one night and in the first show there was this part with a mummy coming out. So Dustin Hoffman was sitting up in the crowd with his kids who were big fans and he wanted to be the mummy in the second show so he became the mummy. and when the mummy revealed himself in the second show it was Dustin Hoffman. It was a surprise to Eminem even. Marshall has a great sense of humor and is a lot of fun so it was really cool.”

By the time Paul McGuigan took over hip hop was already ingrained in the club’s DNA. Paul booked some epic shows there including Jay Z’s “American Gangster Tour” but the date that will forever be etched in his memory was none other than Lil Wayne who booked his first LA show in support of what would become one of the most significant albums of the decade.

“Lil Wayne show the day that Tha Carter 3 released. That was crazy. The record had entered the charts at number one and it was just absolute madness,” McGuigan recalled. “At the time there was no hotter artist than Lil Wayne. Booking Jay Z’s [American Gangster] was one of the biggest things I ever did but that wasn’t a surprise, with Lil Wayne I put the tickets on sale and by the time the show finally got around to us it was the day the record came out and debuted number one and it was the most electric atmosphere I’ve ever been a part of.”

Earlier this year Big Sean booked a show during Grammy weekend. As McGuigan recalls It would turn out to be a star-studded affair that even he wasn’t expecting.

“That night was crazy. It started out with YG and DJ Mustard as the surprise openers and by the time Sean came on it was just one after another. First Travis Scott came out and crowd surfed. Then J. Cole, then Tyga. Kanye got up and did a set in the middle of his show. He grabbed the mic and started playing a bunch of Kanye songs, went on a rant about Nike. By the end of the night everyone was on stage together and even Chris Brown and Justin Beiber jumped on stage. Kanye was a big part of my tenure at House of Blues. I did a bunch of shows with Kanye before he really blew up. He was big but it was pre 808s and Heartbreaks. I think it was before 2007.

McGuigan covered a lot of ground in hip hop and his final show on July 30, would turn out to be the most poetic.

“My last show fittingly was DJ Quik, who was probably the artist I booked the most over the years, him and Too Short. Quik was my favorite. He was one of the first guys to really go out and have a band, even before Snoop. A lot of those guys were still doing two turntables and a deejay and I think Ghostface and DJ Quik were two of the firsts to really bring instruments out.” There were a lot of great memories at that place and it will definitely be missed.”