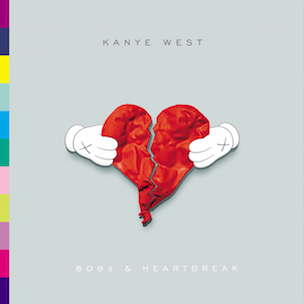 Supportive or critical of this album’s movement, you have to admire Kanye West‘s courage. In the days of shrinking albums sales and sticking to proven formulas, one of music’s biggest artists has done a complete 180 after having last year’s top critical and commercial album in Graduation. Some call it a slap to the face of his fans, others call it a true artist’s evolution. Implementing auto-tune is hardly a new idea, but criticism that Kanye is just piggybacking some T-Pain money and not just doing this because he felt like it ignores the trends of this man’s career.

Combining the emotions of a lost mother, a called off engagement, and the stress of mega-stardom and “pap-snapping” celebrity, Kanye has taken a detour from his “school” series, as well as his proven comfort zone for 808’s & Heartbreak. The album opens triumphantly, in fact the first five songs are as good a start to any work this year. He may be singing a different, computer-assisted tune, but Kanye‘s trademark attention to detail remains in tact on the minimal opener “Say You Will.” By the time it is running on at the end of the song, the beat has built and evolved beautifully. Kanye‘s songwriting takes center stage on the Kid Cudi-assisted “Welcome To Heartbreak,” as he laments his drive for fortune and fame costing him everything else in his life, specifically building a family. Sampling may have been set aside, but ‘Ye’s production here – between the opening cello and the piano throughout – it’s as moving as anything he’s ever done.

“Heartless” [click to listen] is the most evocative song in ‘Ye‘s artistic evolution, and not just because it is one of the few instances in which he actually raps. It is the perfect marriage of Kanye‘s 808’s & Heartbreak experiment, with all the pieces coming together in a way they seldom do over this album’s 11 tracks. Put this song on any other Kanye album and while it might walk the perimeter, it’d still be pretty fresh. “Amazing” [click to listen] isn’t far off either with it’s excellent song structure, visceral production and welcomed rapping guest Young Jeezy [click to read].

After hit single “Love Lockdown” [click to listen] bookends a phenomenal start, the album begins to slide as the attention to detail starts to reflect a T-Pain album rather than a Kanye West album. “Paranoid” [click to listen] sounds like a Tangerine Dream album cut from two decades ago, equally as understated today. “Robocop” [click to listen] follows, and despite its rugged intro and title, it is more Peter Pan than Peter Weller. “Street Lights” is quality work, but “Bad News” is quite dull and “See You In My Nightmares” [click to listen] featuring Lil Wayne is one of the biggest disappointments of the album. The duo doesn’t come close to finding the chemistry they showed on Tha Carter III [click to read], and their combined auto-tuned stylings ignore the definition of overkill. “Coldest Winter” [click to listen] is ‘Ye‘s highly-publicized tribute to his mother, and while it is a good song from an aesthetic standpoint, it’s a letdown. Obviously you can’t fault the man for making what he felt, but the song came as an abstract surprise from the man who was so specific three years ago on “Hey Mama” [click to read]. West offers unfamiliar fans a breakup anthem, in what is arguably the most personal song on the album.

If anything, this album proves once and for all what an incredible artist Kanye West is. Being that 808’s & Heartbreak is a completely different beast than his past work, it is impossible to compare. But consider how drastically different this is than his debut, and that he still pulled it off very easily. Few artists can stray so far from home and succeed. This is even more impressive when his art project was made using the musical equivalent of paint-by-numbers known as auto-tune. For many, auto-tune is only tolerable in small doses, if at all. Through little more than sheer talent Kanye still managed to make an album that begs repeated listens; even if it is only for 75% of it. Welcome to Heartbreak.