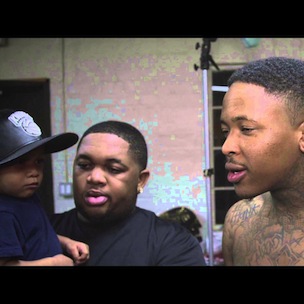 This year, Mustard produced more than half of the tracks on YG’s debut album, My Krazy Life. Together, they topped the charts with singles like “My Nigga,” “Left Right” and the Drake-assisted “Who Do You Love.”

But today (December 29), their banner year took a turn for the worst when Mustard decided to air out his grievances with his West Coast comrade on Instagram.

In an Instagram post that has since been deleted, the award winning producer wrote: “Stop asking me about the YG shit !!! I don’t know none of it on top of that I still ain’t got paid for his album. So I don’t give a fuck !!!!!”

Shortly after, YG responded by reposting the image, with a harsh caption.

“Fuck everybody that ain’t got paid for my album,” he wrote. “DJ Mustard I know where yo studio at nigga… & that’s me sayin’ ‘Mustard on the beat hoe.’ You ain’t never paid me for that or yo album nigga.”

The exchange escalated even further when Mustard reposted YG’s response with his own threatening caption.

“I ain’t for no sucka shit and this internet shit weak we can get down this won’t be the first time,” he wrote. “I’m finna pull up we can squabble up!” 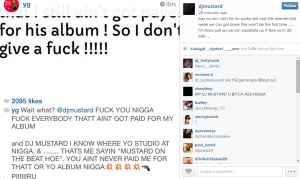 YG has since shared a screen shot of outgoing calls to his long-time collaborator. Perhaps, they will talk things out before the situation sours even further.

UPDATE: DJ Mustard posted on Instagram today (January 1) that his beef with YG may not have been legitimate.

“What ya thought a head up was gone end this ?! Jokes on yall dick heads !!!!” DJ Mustard wrote.