The Most Important Mixtapes Of 2014

It’s no secret that mixtapes have changed the game. These days, it doesn’t take a major label deal or a guest spot on the Billboard Top 40 for emcees just to get a rep. With the help of social media, and of course sheer talent, rappers by the bunches are building ever-growing fan bases as proclaimed mixtape artists.

Hip Hop saw both the usual suspects and the rookies drop hot new music on the mixtape circuit in 2014. Whether it was Curren$y feeding his always hungry fans with “The Drive-In Theatre,” or Tigo B introducing himself on “Rise: A Gemini Story,” there was something for everybody. Here, we hand over our Most Important Mixtapes of 2014. Aside from Teyana Taylor’s VII, G.O.O.D. Music had a rather quiet 2014, which may have worked as an advantage for CyHi The Prince. Black Hystori Project was a reminder that the best is yet to come from the young Yeezus contributor. So the tale goes, the mixtape was inspired by CyHi’s nephew attempting to make his uncle the subject of a history project at school, only to be told that he was not sufficiently important. That claim resonated with CyHi, who took it upon himself to give listeners a free history lesson about the black experience as it relates to his own. Digestible enough for a mainstream radio audience, CyHi nicely balances altruism with mild pop inclinations. “Black Histori Project,” is a treat for fans eagerly awaiting his debut LP, while CyHi adequately upholds the reputation of G.O.O.D. Music. First, Cash Money and Rich Gang were interchangeable. Birdman used the moniker originally to refer to himself, and anyone he could get on Young Money to lay a verse down. As usually happens with too-broad ideas, the original Rich Gang project in 2013 was mostly panned as just terrible. The narrowing of the focus to Young Thug and Rich Homie Quan, however, has created a maelstrom of off-kilter jams, including the crown jewel “Lifestyle” that took the states, and the streets of NY by storm in 2014. As for the musical direction of the mixtape, the presence of Mike Will Made-It, albeit on only one track, speaks volumes: a distinctly Southern bump and flavor is consistent throughout, and the frequent utilization of auto-tune vocals solidifies the experience. Given all of the recent strife between Lil Wayne and Birdman, it’s good to see some business as usual from the Cash Money conglomerate. On Tha Tour Pt. 1, Rich Gang have made make their mark while setting their eyes squarely on the future. 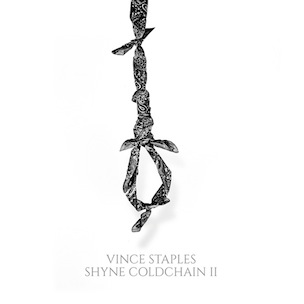 Odd Future has built a powerful reputation by consistently putting out good music, thanks largely to their deep, talented roster. When one of their artists is relevant, another steps in to share the spotlight. Tyler, Earl, Frank Ocean, and now Vince Staples embody their success stories coalescing with one another in succession. Staples, HipHopDX’s 2014 Rookie of the Year, dropped Shyne Coldchain II in March, and rode the momentum through the end of the year. At 29 minutes, the mixtape is short but concise. Vince doesn’t waste a single second, opening up to listeners about the hardships he’s suffered, from dropping out of high school, to the baggage that came with that decision and all of the mischief that ensued. Staples is still chasing the popularity of his labelmates, but his strong performance on “Shyne Coldchain II” is a testament to just how good he can be, while navigating his way through the mixtape circuit. 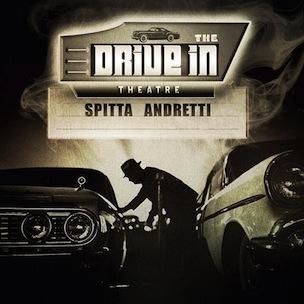 If an award honoring the ability to continuously pump out material existed, Curren$y most certainly would have won one by now. Spitta dropped a whooping six mixtapes in 2014 with The Drive-In Theatre leading the way after its release in February. For an artist with such an extensive catalog, Curren$y provides a lot in the way of consistency having solidified a niche for himself with his weed-laced rhymes and chill demeanor. Expectedly, the quest often becomes about finding the music that best fits the theme of the album or mixtape. Audio-sample interludes from The Godfather, and production from Thelonious Martin and Cardo work to establish a cohesive flow from beginning to end, enabling Curren$y to aurally cinematize the whole experience. Given the amount of music he released in 2014, The Drive-In Theatre stands apart as a more superior effort from Curren$y. 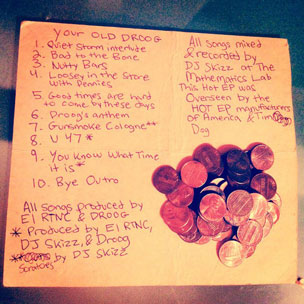 When music from Your Old Droog first began to surface online, Hip Hop fans found it difficult to believe it wasn’t actually Nas rapping incognito; the tone of voice and literary prowess seemed like dead giveaways. Yet low and behold, it wasn’t him. Given all of the interest conjured up by that mythos, today’s aspiring rappers would be smart to take notes from Your Old Droog on how to achieve better name recognition.

Your Old Droog EP capitalized on the hype that preceded it. Its gritty ambiance and mesmerizing lyrical performances are truly infectious. An emcee’s emcee, Your Old Droog has crafted a quasi-unique identity with his talent and lyrical cunning, aptly climbing ladders in the early stages of his Rap career. The EP also acts as an hors d’oeuvre while fans awaiting a follow-up mixtape or full length studio LP from the elusive emcee. Gangsta Boo dropped two mixtapes in 2014. The first was Witch, a collaborative EP with La Chat. Then came the renowned Underground Cassette Tape Music in October, a Southern style collection of that classic raw Memphis Hip Hop. Ever since Mystic Stylez in ‘95, Gangsta Boo has attained a reputation as a pioneer in the South. Flanked by a number of veterans from Paul Wall to 8Ball, Underground Cassette Tape Music is as turnt as her fans could have hoped for, while BeatKing provides an in-your-face intensity and a consistently loud sound throughout. Hip Hop from this region is solid like a rock; Three 6 Mafia, among others, thrust the style into the limelight, and the vibe has managed to stay true to its roots since the beginning. As such, Underground Cassette Tape Music is a noteworthy exposé of style from a leading lady of Southern Hip Hop. 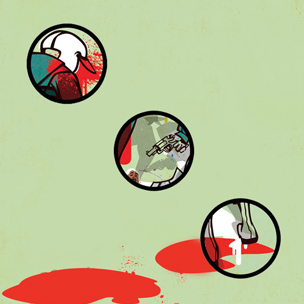 In 2013, Planet Asia and Gensu Dean teamed up for Abrasions, a tough streetwise offering from the LA emcee and Texas beatsmith. Then, in February, almost a year to the date of Abrasions’ release, Planet Asia enlisted the help of Apollo Brown for the five-song follow-up EP, Abrasions: Stitched Up. The mixtape is a small sample of Abrasions cuts retouched with Apollo Brown production. Brown and Gensu Dean occupy different ends of the same totempole: both prefer a sample-based boombap style, but with different resonances. On Stitched Up, Planet Asia and Brown work together with an admirable cohesiveness. Where Abrasions was laced with an underground grittiness, this one bangs a little bit harder. The lyrics are in the same vein, but the music offers a nice contrast for listeners and fans of both producers. Planet Asia has nothing to prove, but with this one, Apollo Brown left his mark on the mixtape circuit in 2014. 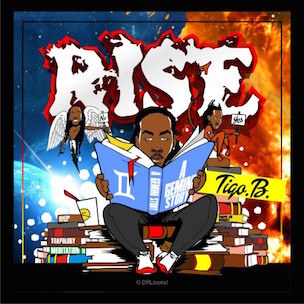 There is still much to be learned about Tigo Bizzel. The Sierra Leone native by way of North Carolina has slowly been building a reputation as a mixtape rapper. He might not have the backing of A-list cohorts like some of his pupils featured on this list, but he also hasn’t let that hinder him in the slightest. Rise: A Gemini Story is lush with originality and complex bars. Time and again, Tigo displays razor sharp wit in his metaphors and punchlines, and the content is both refreshingly unique and full of confidence. On the production side, 8Track, Laphelle and Nubreedz make up a three-headed monster of beatsmiths responsible for the mellow, laid back ambiance, while the lyrics and beats culminate in an experience equally well suited for smokeouts or cruising around in the car. With Rise: A Gemini Story, Tigo B is walking proof that anyone with talent can make noise as a mixtape artist. 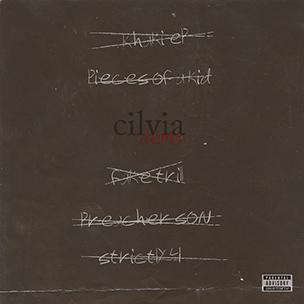 Isaiah Rashad first started making waves when he and the other Top Dawg Entertainment emcees starred in the 2013 BET Hip Hop Awards Cypher. Cast as the unknown, his verse caught praise from major Rap media outlets and TDE fans alike, ultimately getting the wheels turning on his indie label career. Shortly thereafter in January, he dropped Cilvia Demo. The EP contains 14 tracks, reflecting his desire for ample creativity and spontaneity throughout. To this end, the energy of the mixtape is a roller coaster of emotions. But his rhymes are the real story. His phenomenal wordplay is worthy of praise, and each verse runs on into the next one, showcasing a stream of consciousness that ebbs and flows. Isaiah Rashad cut his teeth on Cilvia Demo, and fans liked what they heard. With 2015 set to be a big year for TDE, the demand for a follow-up will only get stronger. 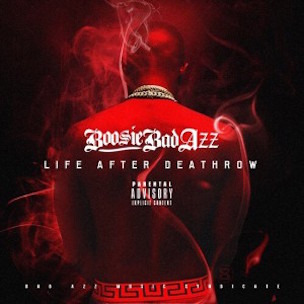 Boosie made his triumphant return to Hip Hop in 2014 after serving five years in Louisiana State Penitentiary at Angola. Upon his release, the media wasted no time referring to him as the Tupac of the South. Boosie didn’t take the bait though.

Life After Deathrow is a strong release, no doubt inspired by five years of self-reflection and thinking time. Boosie had previously expressed his discontent with “the mixtape game,” but several delays pushed the release of his upcoming LP Touchdown 2 Cause Hell back to 2015. As a result, a mixtape became the only viable option for new music. The album strikes a nice balance between the club bangers and introspective narratives, and his hunger is constantly palpable. Polarizing as he is, Boosie leaves no stone unturned on “Life After Deathrow,” articulately detailing the highs, lows, and wisdom of his recent hiatus. 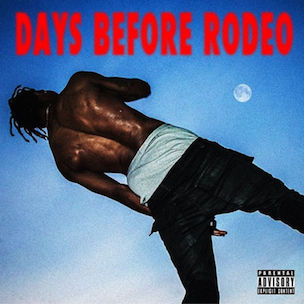 Days Before Rodeo reinforces the notion of Travi$ Scott as a musical prodigy and savant. At 22-years old, his production credits already include Yeezus and Magna Carta Holy Grail, just to name a few. Now that he’s attained solid footing as a producer Scott has begun wetting his feet in the waters of rapping, much like his famous G.O.O.D. Music mentor before him.

Scott is unique in that he is a musical chameleon: one minute he’ll spit over a complex, sample-based beat, only to switch it up in favor of something more Trap Rap. To this end, Days Before Rodeo has some G.O.O.D. Music flavor to it, but the presence of Rich Gang and Migos also speaks to the Grand Hustle side of things. Scott is making valiant lyrical strides only a year removed from his debut mixtape “Owl Pharaoh.” For now, everything is meshing nicely.