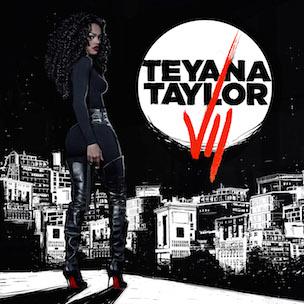 The Super Sweet 16 brat turned Star Trak signee turned G.O.O.D. Music vocalist released her first full-length album under the Def Jam imprint on November 4. Gaining exposure from her appearances on Cruel Summer and My Beautiful Dark Twisted Fantasy, Teyana Taylor’s album was anticipated in the music world to affirm her First Lady position amongst the talented roster of G.O.O.D. Music and to convince critics of her vocal abilities that have been heavily questioned throughout her career. Teyana Taylor assailed on all aspects and VII is a solid body of work highlighting the sultry, deep vocals that Taylor have become known for. Enlisting some heavy hitters, Chris Brown accompanies Teyana for a sexy duet and Fabolous, Pusha T and Yo Gotti also make guest appearances on the project., VII deals with the many facets of love, whether it be sex, affairs, secret lovers, heartbreak or total bliss, Teyana uses different moments of intimacy as the basis for her work.

The first half of the project features Teyana Taylor in her comfort zone, utilizing her raspy voice in a series of love ballads that are both strong and classically inspired, intertwining an old school scape of R&B with contemporary production. However, a few tracks in, when she partners with Breezy for “Do Not Disturb,” the sex appeal is inflamed as the two deliver a bump and grind record that is explicit and intoxicating. The sexual aggression shatters her Sweet 16 image and further carves the perspective of Teyana’s music.

Although Teyana aims to bring diversity to her sound, the time measurements on her more eclectic tracks make it clear that Taylor is much more comfortable presenting sweet and sultry vocals and not much else. She ventures outward on her single “Maybe” as Taylor takes on a liquor induced, sexually assertive persona (a la Tinashe) alongside Yo Gotti and Pusha T. Aside from the confidence in Teyana’s voice, Pusha T’s gritty vocal tone juxtaposes Teyana’s soft one nicely, and while the song is better for it, Pusha T has done more as far as guest verses go.

Afterward and remarkably, Teyana sings a heartfelt apology letter to an ex who did her wrong and her honest lyrics and genuine delivery create a ballad that is breathtaking. Following “Sorry,” Teyana Taylor pays homage to Ginuwine with her rendition of “Business” and the record stands inconspicuous against the loftier track listing. With an incredible and prolific catalogue from Ginuwine, covering “Nobody’s Business” at this point seems typical and overused. Nonetheless, Taylor makes an astonishing comeback with “In The Air,” finding her independence from a dysfunctional relationship. Teyana victoriously gains control of her voice in two realms: her love life and the music industry, by successfully embodying a different vocal style.

The album finishes strongly, expanding on thematic topics expressed through her raspy timbre. Overall, VII feels authentic and offers a much wider scope of artistry than we’ve seen prior from the Island Def Jam artist. Teyana’s growth is evident, challenging her singing capabilities while honing in on her ranges of comfort. Aside from the lack of significant risk-taking, Teyana Taylor generated a debut album that is honest and well produced. And while she takes absolutely no risks on the album, and her vocal range is limited, she never strays from what she does well. Nevertheless, it seems like she can now officially change her title from on the scene vixen to contributing musician to R&B.