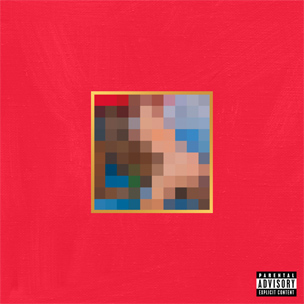 In the opening bars of My Beautiful Dark Twisted Fantasy, Kanye West asserts, “We found bravery in my bravado.” As far as Hip Hop music goes, this is too true. Because of West’s renaissance of carefully-crafted artistry and decadent decision-making, Rap has been restored from an over-saturated commodity to the grandiose stage Jay-Z left empty after The Black Album.

The earliest glimpse at My Beautiful Dark Twisted Fantasy is one of its best moments. “Power”

is the Kanye West that will be most remembered in lyrical circles. “In this white man’s world, we the ones chosen / So goodnight cruel world, I’ll see you in the mornin’ / Huh? I’ll see you in the mornin’ / This is way too much, I need a moment.” Just as Eminem paused amidst his uber-fame in 2002 to relive his battle-to-mainstream ascent in “Till I Collapse” and “Lose Yourself,” Kanye West reminds us that while he’s reading price-tags and royalty statements, he still reads the news. he declares on “Gorgeous”

, “Face it, Jerome get more time than Brandon / And at the airport, they check all through my bag and tell me it’s random / But we stay winnin’ / This week has been a bad massage, I need a happy endin’ / And a new beginning / And a new fitted / And some job opportunities that’s lucrative / This the real world, homie, school finished / They done stole your dreams, you don’t know who did it / I treat the cash like the government treats AIDS, I won’t be satisfied till all my niggas get it, get it?” At a time when West is revising a blueprint he’s help create for Drake and Kid Cudi, his sharp, outspoken lines put him in the lineage of Ice Cube and Chuck D, something that ‘Ye’s predecessors cannot seem to do – without him as a link. Lines like that complement Rap laureate Gil Scott-Heron on West’s closer, “Who Will Survive In America?” And for every mention of Oscar De La Renta, Lamborghini and private jets, one of Hip Hop’s wealthy elite still finds a way to make recession-applicable music without kneeling.

A proven master at thematic album-making, West’s fifth offering is an electric journey equipped with painkillers, a break-up letter, an overstuffed iPod and the latest issue of Penthouse in his Prada duffle. As the most quoted emcee of the last five years returns to his precise Rap roots on “Monster” or the aforementioned “Dark Fantasy,” he also acknowledges 2008’s 808’s & Heartbreaks not as a wrong turn, but as a fuel stop. With some of his simplest and melodic bars West’s “Runaway” epitomizes his mastery of the anthem. The emotion on this album is a kaleidoscope of self-righteousness, loneliness – and something that’s been missing from the last two albums: joy. The nine-minute “Runaway” reveals all of this in one place, as West’s message drunkenly sways between a proud cold shoulder and a bended-knee plea. Although most songwriters would be accused of disjointed messages, Kanye’s deep sincerity gives him dynamic dimensions that he’s rightfully earned through a decade of public antics and extensive catalog.

For an album that resulted from sessions with Pete Rock, Q-Tip and No I.D., My Beautiful Dark Twisted Fantasy avoids any throwback qualities. Instead, the work carries the sample-driven sound forward with a more refined arsenal of keyboards and filters that West started motioning towards in 2008’s “Swagger Like Us”

and “Welcome To Heartbreak.” Dark, fuzzed-out electric accents give this album a cohesive sound that anchor the multiple themes. A Blues riff on “Gorgeous,” hard synths on “Hell of A Life” and Bon Iver’s scratchy, extended vocals on “Monster”

have more in common in audio than on paper. If 808’s were pastels to Graduation’s orange, then the sharp bold production on Fantasy bleeds scarlet red. On the songs that stray from traditional Rap sounds, such as “Runaway” or “All of The Lights”

, West’s Akai MPC hand ferociously reminds any skeptic that he’s not straying, but expanding. Pounding drums on “Lost In The World”

make every song on this album club-ready, and an intense tapestry of ever-changing sound that includes several genres and decades of inspiration.

Kanye West’s bravado has inspired cartoons, it’s made award show producers sleepless, and it’s caught the attention of both Presidents Bush and Obama. But within that bravado is a bravery that allows Hip Hop artists to step outside of their carefully-guarded boxes. From nine-minute douchebag manifestos, to enlisting an A-list Grammy ensemble to piece-mealing his album out to the masses every Friday, My Beautiful Dark Twisted Fantasy defies logic and it ignores convention. Whether it’s acknowledging his mistakes, measuring his might, or fantasizing of wifing Kristina Rose, Kanye West finds a way to relate to all. He’s not forcing his hand, just reminding us that the biggest star we appointed in the last five years can still recognize our own fantasies, insecurities and desire for colorful music from his spaceship.