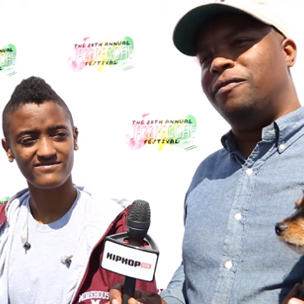 Syd The Kyd and Matt Martians are The Internet, an intoxicating blend of old school neo-neo soul mixed with progressive, young adult angst that bookends the wild machinations of their helter-skelter collective OFWGKTA. While Tyler The Creator and Earl Sweatshirt are the most well known members of the group, The Internet’s modernist takes on young love and the type of music that defines it has won them a loyal and growing subset of fans.

Of course, they’ve both grown tremendously between their debut Purple Naked Ladies and their sophomore effort Feel Good, but it’s the next leap by, arguably, the most musically succinct members of the Odd Future crew that keep us up at night. The sky seems to be the limit for the dynamism of Syd’s layered songwriting against her stripped down vocals poured over Matt’s hazy, space-age production, but with stardom pretty much banging down their door, can they pull enough out of that growth to satisfy their most ardent fans and achieve mass appeal?

That was the question on our minds as we caught up with the crew at the 28-year-old UCLA JazzReggae Festival, a student run music and arts festival that, this year, featured the likes of Snoop Dogg, Aloe Blacc, Ky-Mani Marley, Kevin Lyttle, Georgia Ann-Muldrow and, of course, The Internet. One of the largest run student produced music festivals in the United States, the UCLA Jazz and Arts festival gives stage to both burgeoning talents and industry veterans. And, for our money, Odd Future’s strangest incarnation is also one of their most intriguing.

How The Internet Have Evolved As Musicians

HipHopDX: How has your sound evolved since Feel Good and how did you hook up with Raleigh Ritchie for the Black and Blue Point (remix) album?

Syd The Kyd: Our sound is kind of always evolving, and for the next project we’ll probably have a little more live stuff–like live horns and live strings. In general, I’ve gotten way better as a singer in a little while, and we’re all just becoming better musicians.

Matt Martians: I’ll say with the next album, the songs that we haven’t released, it’s a lot cleaner. And not cleaner in the way of like making it not sound weird anymore. You lose the little weirdness that made it cool. No, like, it’s more tight. The groove is more defined, because with a lot of with our older music the groove would go here, and then it would go all the way in another route. We still have those types things, but we’ve learned to find that medium with stuff that everyone can listen to as well as something that people who are into weird music can appreciate at the same time.

Syd The Kyd: Yeah, we’re figuring it out.

DX: How did you guys hook up with Raleigh Ritchie?

Syd The Kyd: Oh! We have the same publisher over at Sony ATV. And so one day she sent him some of his music, and I started listening to him and I liked it. Then she introduced us, and one day we just got a phone call asking if we would do the remix EP and we said yeah.

DX: Your sounds are very similar, so did you just feel a synergy?

Syd The Kyd: No, and to be honest, I don’t really think our sounds are very similar. If you listen to majority of his music, it’s really like cinematic and theatrical. Ours aren’t really like that. So, that’s why I thought it would work. Because I don’t like to remix stuff that sounds already similar to what we’re are doing, you know? It’s like no point.

Matt Martians: And I’ll say this. I think a lot of the times, we don’t like to work unless we know them as people first.

Syd The Kyd: Yeah! He came to the studio and hung out.

Matt Martians: Yeah, he came to the studio and hung a lot. Like, we have to have a day to hang out with people. Music is cool, but it doesn’t feel the same way if you’re not connected with the person like that, you can’t chill with that person because then, you come back the next day and stuff starts forming because you already know you can be in the studio with this person. So, I think, that’s what I like about us. We don’t really judge a lot of things on… I mean we do judge it on music, but we’ve encountered people that make great music but just aren’t great people and it’s really not… We’d love to work with them but we just can’t because…

Syd The Kyd: I don’t like that type of energy around me.

Matt Martians: Yeah, we take the energy to the core, and the energy we live by is what we put into the music. So we’re not going to put that type of energy into our music. That’s for how we feel as people, you know what I’m saying?

DX: My favorite record from that album is “Red Balloon,” can you talk about that record for us?

Syd The Kyd: “Red Balloon,” that’s one of my favorites… Every song on there is like a little story. But, that one, it was produced by Thundercat who… Our keyboard player is actually… They’re brothers. So, we just went over his house one day, and he played it for me. I was just like, “Can I have that?”

Syd The Kyd: He gave it to us, and the song just kind of came to me one day. It was really awesome.

Matt Martians: The good thing is the next album he’s going to be involved a lot more. We’re past the music, and he’s like family. Literally his brother’s in our group, so that’s family now. And, you know, it’s crazy because like a year ago, a year-and-a-half ago, we were like, “Man, I wish Thundercat would just let us know that we exist [laughs].” So it’s cool that he’s like an older brother to us, like a real mentor. He’s a real level headed guy that still has a great spark of youth, and he’s very good if you need some good advice on life in general. Yeah, he’s a real good dude.

DX: His album was also incredible…

Matt Martians: He came out the game with two classics.

Syd & Matt Explain Why Being Friends Makes For Better Music

DX: You guys get better on stage every time we see you. Is it just getting your reps in, or are you guys just both growing as musicians?

Matt Martians: And I think it’s just easier because we’re genuinely friends. I was telling my mother the other day, “I’m very thankful to be in a band that… where I care about every person in the band, and it’s not like one person in the band is kind of like…” No. We’re really brothers. It’s really crazy, and it makes it easy.

Syd The Kyd: It’s  just way cooler growing with people that you care about.

Matt Martians: You have that type of connection, so you want everybody to be happy with what you’re doing. So, it’s a passion that we all share as far as how we grew up and the music we grew up on. So, we’re very lucky to have found and have the band that we have, man. I’m always fortunate for that, because we definitely could be the other way around.

Why The Internet Chose To Wait On An Odd Future Collaboration

DX: You guys haven’t really worked with Tyler or Earl on any of the albums you’ve made. Will you be working with them more on the next album?

Syd The Kyd: Yeah. Tyler texted me this morning.

Syd The Kyd: We’re looking forward to working with them. And the reason we didn’t have them on the first couple of albums is because we wanted to prove to ourselves and to everybody else that we could do this by ourselves without a co-sign…

Matt Martians: Without the big feature that everybody wants to go to right when the album’s released.

Syd The Kyd: We wanted it to be about our music. It worked out, so now we’re working with them on the next stuff, you know, now that we’ve established ourselves.

Matt Martians: We work with Thebe [Earl Sweatshirt] all the time. When he first got back from Hawaii, he was staying at our house. We have many beats that haven’t been released that we have sitting around. It’s always… It’s like family. You don’t always see them, but when we see them, but it’s something that we all share. It’s like, a connection that we all share. If we need them on the album, they gonna come, but they understand we wanted to do it on our own at first. And they definitely respect it. You can tell by how they treat us [laughs].

DX: Is there anyone else that’s going to be on the album that you want to talk about?

Matt Martians: Nah, we don’t want to give all that up.

Matt Martians: We’ve been working with some new people that’s really fire. And, I don’t want to say a name but, yeah, next album is going to be real tight. We’re going for some real like trying to get some females on the floor to dance. You know, that’s really all we want. We want the girls to dance, man.

DX: And, do you have any details on when the album will come out?

Syd The Kyd: Next year probably.

Matt Martians: We’ll be releasing some stray tracks throughout the year. My friend Cash has a mixtape coming out so you know we might have a song on there. So, we’re releasing songs that make sense with friends and stuff like that, but we really want to focus this year on touring.