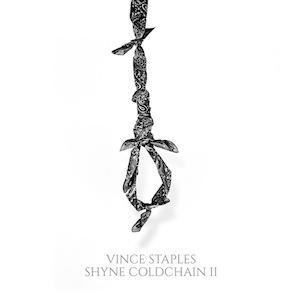 Routinely battling odds, Vince Staples has sought escape from the trappings of endangered youth in Long Beach while coming into his own from under the shadow of his friendly competitor Earl Sweatshirt. Though the two share creative chemistry, their back-stories diverge as Odd Future’s scary imagery never matched most of their amicable realities. In contrast, Vince’s Rap pursuits detour from acquaintances and relatives who wound up imprisoned or in early graves, leaving him no choice but to carry on their legacies. A continual testament to his foresight, Shyne Coldchain 2 is his fourth mixtape in as many years, as his career has finally begun gaining traction.

Hardly one to fit in easily (thus rumored to still be on shaky ground with factions of the OF collective) Vince Staples’ primary disposition is one of cynicism towards Hip Hop and society in general. Thankfully, savvy business moves have helped him get ahead in the race while keeping his work free from compromise thus far. Out the gate taking no prisoners, Staples lets his stream of consciousness loose proclaiming, “Obama’s just a house nigga to me” on the ominous first track “Progressive 3.” Proceeding to lash out further, he starts his second verse, “Just sit and look at where they raised us at, seen blacks ain’t crack, so they gave us that / Give us hope then take us back, to the 1800s with these Rap contracts.” These sharp couplets explore the double-edged sword of progress that awaits naïve upstarts—a trap Vince has so far been adept at dodging.

Clocking in at 29 minutes, Vince Staples takes advantage of each introspective and grim moment on Shyne Coldchain 2. While he has mastered the techniques of potent flow and delivery, multiple listens are required to grasp the lessons and wisdom in the brief project’s 10 songs. “Oh You Scared” is a highlight where the normally sweet temptress Jhene Aiko teasingly accentuates Vince’s malicious performance—their conflicting values making for one of his most professionally polished records to date. Having graduated to the big leagues, the abrasive “Humble” makes it clear he’s earned his spot as its hook barks, “I deserve this shit / I’m from the side of the curb where the birds get flipped.” In vivid detail the still adolescent emcee discusses dropping out of high school to cause mischief, putting good use to witty visuals such as, “Ski maskin’, but niggas wasn’t going to Aspen.” Shortly thereafter, he tries to explain his heartless position to his mom, hoping all will be forgiven if he makes it rapping. Where it would seem he’s ice cold, he shows glimpses of sincerity here and on “Earth Science,” an open letter to an estranged flame, proving warmth lies beneath his surface.

Without an overt attempt at reaching the radio, Shyne Coldchain 2 catches the world off guard, reminding of a time when lyrics and genuine stories were all it took to be received favorably. Rather than promoting violence as a worthwhile resolution, Vince Staples’ hazardous conditions knew little alternative until Rap came along. His biggest challenge will be reeling in new fans accustomed to being spoon fed simplicity, as the murky “Trunk Rattle” risks going over heads. Setting a dismal depiction of his family’s criminal background, “back when Common had you trying to read Korans and go to college” comparing their plight to those who were afforded better experiences. Calling his affiliates “the pride of [Crip gang founder] Raymond Washington” on “Locked And Loaded”, the KKK’s onslaught as an analogy for modern urban genocide is yet another example of Vince’s poetic brilliance.

Vince Staples is a pleasant anomaly to a Rap game often watered down by acts seeking attention for everything except quality music. Full of slappers from relevant producer turned Def Jam higher up No I.D., Shyne Coldchain 2 serves as an appetizer prepping for an anticipated retail album from Staples on the powerhouse label. With the machine behind him, he tells the all too familiar tale of determination to get out of the hood instead of surviving in it. Despite his limited perspective, it manages to excite due to a varying degree of tempos along with a lack of artistic sacrifice. Since making peace with his troubled days, Vince Staples has figured out his path and leapfrogged the pack, this release sure to accelerate his steadily rising status.