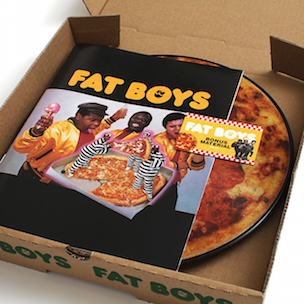 The Gift That Keeps On Giving: 6 Of Hip Hop's Most Innovative Deluxe Packages

With Thanksgiving here and the official holiday season jump-off Black Friday arriving hot on its heels the day after, a handful of notable limited edition Rap releases are set to grab Hip Hop heads’ attention as the yearly four-week festive shopping frenzy kicks off. The releases represent the latest additions to the growing pile of deluxe special edition Hip Hop packages that have surfaced over the past few years.

Leading the way are the folks behind Record Store Day – the annual celebration of record stores, physical music and vinyl culture. As part of their fifth annual Record Store Day/Black Friday spin-off event, a couple of classic Hip Hop singles have been given the exclusive reissue treatment just in time for the gift-giving season.

Sitting top of the stack of RSD’s Black Friday joints is a new reissue of the Wu-Tang Clan’s landmark 1993 single “C.R.E.A.M.”, this time as a 10-inch vinyl disc cut into the shape of the crew’s iconic “W” logo. OutKast, meanwhile are commemorating their debut single “Player’s Ball” with a 10-inch pressing on green wax, which includes a rare extended mix of the track.

But that’s not all. Separately, the Wu-Tang Clan are readying their brand new album, A Better Tomorrow, for a holiday season despatch, and will release a limited edition version in the shape of a Wu-Tang-branded Boombot REX speaker, with songs from the new album embedded in the Bluetooth-enabled unit.

With digital downloads now firmly the dominant format, and sites like DatPiff, 2DopeBoyz and LiveMixtapes largely replacing record labels as the key outlet for artists to release new music, both the majors and indie labels have sought new ways to differentiate themselves in an increasingly crowded marketplace.

Sure, some may see these releases as cynical cash-ins or lazy marketing gimmicks designed to try and bolster figures against a broader backdrop of falling music sales. But whether it’s Wu-Tang releasing their new album in a speaker, the Fat Boys’ debut album being re-served in pizza box packaging, or a new version of MF Doom’s Operation: Doomsday arriving as a comic book-themed lunchbox, artists and labels are tapping into a demand among fans for something more tangible in this digital-first era. As RZA said of the upcoming A Better Tomorrow speaker release: “There’s something transcendent about being able to physically hold music. Back in the day, holding a vinyl helped you appreciate just how much time and sweat goes into creating a single track, let alone an entire album. Over the last decade, we’ve lost that sensation.”

So with more of these exclusive versions set to drop this week, the special limited edition format looks set to be the gift that keeps on giving when it comes to Rap records. Here are six of some of the most memorable packages from the past few years. Along with Schoolly D over in Philadelphia, and Ice-T and N.W.A out west, Boogie Down Productions helped lay the foundations of what would become Gangsta Rap on their debut album Criminal Minded. The stark street stories of tracks such as “Listen To My 9mm Go Bang”, matched with the music’s kick-snare-scratch minimalism (partly masterminded by Ced Gee of Ultramagnetic MCs), was as raw as rap music got in ’87.

As a result, Traffic Entertainment’s strikingly simple USB gun reissue of Criminal Minded from 2009 was the perfect platform for KRS’ hardcore lyrics and the stripped-down simplicity of the music. The concept–a pistol-shaped 1GB USB drive boasting the original 10-track album on mp3 and a bonus file of unreleased and exclusive material–may seem crude, but it mirrored perfectly the album’s iconic cover (which featured KRS-One and his deejay Scott La Rock heavily tooled up with weaponry and laden with ammo). As a package, it also served as a neat combination of tangible physical product and today’s dominant digital format of mp3.

The shelves may be groaning under the sheer weight of seemingly-endless Operation: Doomsday re-releases — the ethics of which have sparked some debate — yet Metal Face Records’ double-CD reissue, packaged in a metal lunchbox, at least reflects the spirit of MF Doom’s underground classic.

The album saw one-time KMD rapper Zev Love X reinvent himself as MF Doom, a mysterious alter-ego in a metal mask (heavily inspired by Marvel Comics’ character Doctor Doom) intent on ridding the world of wack emcees. Drawing directly on the super-villain theme, the metal sandwich box reissue package came complete with a comic book-style lyric book and cartoon trading cards and recalls all those Marvel superhero school lunchboxes that fans of certain vintage will remember fondly from their childhood.

A landmark album of the ‘90s, a stone-cold Hip Hop classic, and a strong contender for that hotly-contested Best Wu-Tang Solo Album award, Only Built 4 Cuban Linx… sketched out the blueprint for much of the Mafioso strain of Rap that would emerge over the next few years.

But while RZA’s cinematic production may have echoed the rich grandeur of The Godfather trilogy, lyrically the album was influenced more by the everyday street combat of Abel Ferrara’s King Of New York or Martin Scorcese’s Goodfellas. On the album, Raekwon and cohorts rapped about flooding the streets with a superior product, and it was this strategy that was carried over into the album’s original design. Rae told XXL magazine that the signature purple cassette was aimed at distinguishing the album from the rest of the pack. It proved a genius marketing move: “The Purple Tape,” as it was informally known, became iconic, and when Get On Down rolled out a limited 1000-copy reissue in 2012, housed in a deluxe display box with extended artwork and liner notes, its legend was cemented. Long before the likes of Action Bronson and Roc Marciano were seasoning their lyrics with culinary references, old school trio the Fat Boys had the food-rap game firmly on lock. With their calorific rhymes (“For breakfast it was teaser five piles of bacon/And halfway through my stomach started shakin’/Toast on the side, five gallons of juice/And that was just for breakfast when I start to get loose…”) and a memorable scene from old school hip-hop movie Krush Groove — in which they took the term ‘all you can eat’ a bit too literally — it was only right that that their debut album was reissued in 2012 for Record Store Day’s Black Friday as a special vinyl picture disc pizza, housed in a takeout pizza box.

The crew formerly known as the Disco 3 would later slide into novelty territory, with daft remakes of the Beach Boys’ “Wipe Out” and Chubby Checker’s “The Twist”. But their old school rep remains solid, and their Kurtis Blow-produced debut remains bulging with heavyweight.

Having built his rep as part of Jay-Z’s Roc-A-Fella stable in the early 2000s, Freeway raised a few eyebrows when he dropped The Stimulus Package  a full-length collaboration with Seattle-based producer Jake One — on the Rhymesayers imprint, a label traditionally associated with the altogether more subterranean stylings of artists such as Atmosphere and Aesop Rock.

But the renowned label completely nailed it with album’s lavish packaging. The CD version boasted lyric sheets and liner credits printed on dollar bill-style notes, which were stuffed into a gatefold sleeve presented as a designer wallet. The vinyl release meanwhile was pressed on money-green wax. As a whole, the artwork and package as a whole lent extra weight to the album’s ‘get rich or die trying’ monetarist manifesto, providing the ideal backdrop to Freeway’s hustle-heavy rhymes. Whatever GZA may have lacked in charisma compared to the Wu-Tang’s early breakout stars Method Man, ODB and, later, Ghostface Killah, he more than made up for in pure rapping ability. On the 1995 classic Liquid Swords–GZA’s second album following his (largely ignored at the time) Cold Chillin’ debut Words From The Genius–he makes a strong case for being the Clan’s most complete emcee.

Drawing together a disparate range of influences (assorted pop culture such as kung fu flicks and pro wrestling; Eastern philosophies; chess), the album still sounds striking in its complete lack of compromise to commercial sensibilifties, trends or fads. There’s killer punch lines (“Liquid Swords“), superb storytelling (“Killah Hills 10304“) and battle raps (“Shadowboxin’”). The awesome lyricism is Rap music recast as a war strategy, with the Wu-Tang man laying out quasi-battle strategies to outsmart his emcee foes. In other words, the perfect companion to Get On Down’s deluxe miniature chess set.