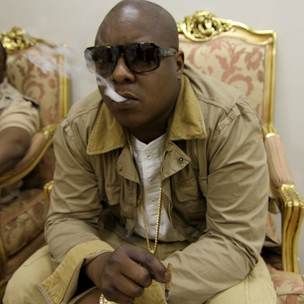 Take a look at the recording industry’s last few strategies to convince people to pay for the albums they can just as easily go and illegally download for free, and you’ll quickly see that the execs writing the continually shrinking checks aren’t exactly master strategists. Between Amazon hemorrhaging money by offering Lady Gaga’s whole Born This Way album for $.99 and several major labels lobbying to shut down the very blogs and sites that help promote the bulk of their artists, the recording industry can sometimes be a veritable gold mine of terrible ideas. For the last decade, most labels have seemed content to mix throwing as much mass-produced garbage at us fans as possible and following the most successful but least risky trend. When the calendar turns to 2012, this year may be known as the year major labels tried to convince people to pay for mixtapes that were originally offered for free.

Granted, this wasn’t the first year the majors attempted to slap a barcode on what was a previously free zip file. Depending on exactly how you want to define the term “mixtape,” this has been going on for the better part of the last decade. But in the last few years, projects such as Nipsey Hussle’s Bullets Ain’t Got No Name, Bishop Lamont and Black Milk’s Caltroit and Yelawolf’s Trunk Muzik  have all been flipped as legal EPs or official mixtapes. For our purposes, we’re not talking about “blend tapes,” or the mixtapes full of previously unreleased tracks originally slated for albums that DJ Clue and DJ Whoo Kid always managed to get their hands on. Generally, today’s mixtapes are free projects comprised mostly of all new material. This year’s bandwagon item has been called the FreEP and “street album” among other things, but at its core, it’s still a mixtape. Or is it?

“They’re really unsanctioned albums,” explained Consequence, who’s managed to both turn a profit and remain popular by dropping three times as many mixtapes as retail albums. “Without having to deal with the red tape, you get collaborations like ‘Childish Games’

In return for ducking sample and feature clearances, emcees like Consequence can usually lock down an official mixtape sponsor to offset their production costs. Add in the lack of packaging and shipping costs and red tape from the label, and you end up with the ability to give fans a free download. And if you really want to test how much fans want your material, giving it to them for free is a pretty good barometer. From an artist’s perspective, a successful mixtape can serve as a prequel to an album by building fan’s anticipation and drawing the attention of a major label.

How Bootlegs Inspired The Labels

Back in 2006, I remember walking into a Nashville clothing store and seeing DJ Drama and Young Buck’s Case Dismissed mixtape on sale for $12. This would’ve been a perfect case of local civic pride if the retailer wasn’t trying to sell something that was a free promotional item at a huge mark up. Inside of the makeshift jewel case was a gloss print of the original artwork, sans liner notes, and a laser-printed CD-R. As someone outside of the industry, this looked like the type of thing DJ Drama and his Aphilliates would later be jailed for. So it came as no surprise that the store was shut down within a few months. But what if a label did the same thing they essentially tried to shut Drama down for?

Initially, seeing labels charge for projects such as Yelawolf’s Trunk Muzik and Vado’s Slime Flu didn’t seem any different than my local clothing spot bootlegging Young Buck. If the labels were the ones initially funding the tapes, they weren’t telling. But if they weren’t what’s the difference between them pocketing the profits from uncleared samples and features instead of the local bootlegger? And mixtapes have always been a bit of a legal grey area for labels. Assuming labels aren’t unofficially funding these mixtapes to begin with, what happens when they sign an artist and his previously independent mixtape becomes wildly successful?

Drake Made A Blueprint With So Far Gone

The always-polarizing actor-turned-rapper Drake provides one of the best examples in recent history of a mixtape evolving into a hybrid EP of sorts. The man constantly derided as “Wheelchair Jimmy” in HipHopDX’s comment section certainly wasn’t the first person to have a barcode legally stuck on his previously free mixtape. However Drizzy might be the owner of the best selling mixtape, as 2009’s So Far Gone

And it’s not as if So Far Gone sidestepped any of the legal issues that originally made it a good idea to give away for free. In addition to paying DJ Khalil for “Fear”

, someone also had to clear the guest appearances from Trey Songz, Lil Wayne, Bun B and Young Jeezy. The fact that most of the aforementioned artists are signed to subsidiaries of Universal (who Drake is also signed to through Cash Money) certainly didn’t hurt. But there was also the issue of clearing the Billy Joel sample from “Uptown” and the “Fallin’ In Love” sample used on “Best I Ever Had.”

Even if you can’t afford to throw an elaborate release party featuring guests like LeBron James, as Drake did for So Far Gone, just calling an album’s worth of original material a free mixtape has its advantages. It doesn’t take an artist a particularly long time to record 20 songs. You don’t need to wait for the people who write the checks to coordinate the release date around other projects. A lead single doesn’t need to be picked, and a budget for promotions and videos doesn’t need to be set aside.

“Mixtapes have no restrictions,” Big Sean added during a recent interview on 106 & Park. “It doesn’t matter if you have hit records or just straight verses. But for the commercial release of an album, you’ve gotta remember it’s going to the stores. So you may have little 10-year-olds hearing your album at a barbeque. I try to keep that in mind, but I never lost the essence of me.”

For most artists, while the 10-year-olds and Top 40 radio are being catered to, the proverbial steak is steadily losing its sizzle. Take Rick Ross for example. Ross dropped his Ashes To Ashes

mixtape on Christmas Eve of last year. Despite not being attached to a retail album, songs like “9 Piece”

and “Play Your Part” found their way onto urban radio, and Ross’ team moved quickly to shoot supplementary videos. Six months later, Def Jam is adding a remixed version of “9 Piece” to Ross’ upcoming album, God Forgives, I Don’t and releasing the single via iTunes as the label-sanctioned video hits their official distributor, Vevo. Do you think potentially sifting through six months of red tape made an impression on Ross?â€¨ â€¨“We needed a situation that understood that we could make music at a much quicker rate than a lot of people do,” Ross told MTV’s RapFixLive after signing his Maybach Music Imprint to Warner. “And I wanted to put out music at that same rate. I think it’s obvious, since we closed the deal, maybe a little more than two months later, here we are today, Self Made  in stores.”

In Ross’ case you end up with two separate retail projects that both feature one song from Ashes To Ashes. But look at the difference in release dates. Self Made, the Warner project that features “Play Your Part,” was released in five months. It’s July, and God Forgives, I Don’t still isn’t in stores.

Eight years ago, it wasn’t uncommon to walk into a Tower Records, and get charged close to $20 for an album featuring less than 15 songs. With the advent of iTunes, torrent sites and zip files that can be downloaded in less than 10 minutes, Tower and the concept of an overpriced album full of filler have gone the way of Kwame’s polka dots. In some form or another, mixtapes will always be a part of Hip Hop music. But as the re-release of Big K.R.I.T.’s Return of 4Eva

(rechristened as the five-song EP 4Eva The Prequel), Jadakiss’ I Love You and the upcoming re-releases of MellowHype’s Blackenedwhite and Pusha T’s Fear of God

If you’re savvy enough to hunt down an artist’s mixtape before their label decides to monetize it, you and your iPod can enjoy the fruits of your labor. But in the broader sense, this business model should pose a few questions. If the Internet allows an artist to trim the filler from an album and sell it to fans directly, what exactly do they need a label for? If you really like the artist that much maybe it doesn’t matter, because you can ultimately decide if you want to support them by waiting a few months and purchasing the same thing they were giving away for free a few months ago.