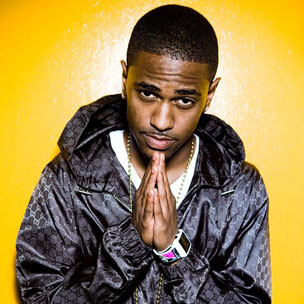 Big Sean’s music is a versatile mix of punchlines, inspirational quips and references to girls and gear, but there are two things you can almost always count on hearing in his songs: his trademark “boi” adlib and shout outs to his hometown of Detroit. Whether he’s on his BET Hip-Hop Awards cipher alongside Kanye West and his other G.O.O.D. Music cohorts, or on his new “My Last” single with Chris Brown, it’s clear that he’s got love for the city that made him—especially the West Side, where he came up.

In an interview with HipHopDX, Big Sean talks about the Motor City: the ups, the downs, and everything in between.

HipHopDX: You shout out the West Side of Detroit in about every song you do. If you were chillin’ with someone from out of town, what are five spots that are really important to you? Whether they’re landmarks, places you’ve frequented, or what.

DX: What was that like, taking MTV to your grandma’s house?

Big Sean: It was dope as hell for my grandma to really see that, especially for her to be a part of an older generation. It really hit her that, “Man, this is really paying off.” She was one of the people who really wanted me to go to college, and I didn’t go, I decided to follow my dream and do music instead. She’s really happy that it’s paying off. To her, the newspaper and stuff like that is bigger than MTV. She also sees me in the newspaper a lot, and she’s like, “Wow.”

DX: We’re both from Michigan, and we know that we have some tough teams to root for—the Pistons, the Lions, and the Tigers for a long time, too. What’s the most difficult team to root for?

DX: When we drafted Charles Rogers, I thought it was about to go down.

DX: St. Andrews Hall and The Shelter are a venue that a lot of Detroit artists look up to and revere. What’s the best or most memorable show you’ve ever been to there?

DX: I was about to ask you about that. You’ve done sold out shows around the country, so what was that one like?

Big Sean: It was dope! Like you said, I’ve been doing sold out shows from New York to LA, Atlanta, the Carolinas, Dallas, Austin and Houston. A number of big cities, including the Midwest. So for me to come back to Detroit and it to be so fucking big. The in-store we did at Revive, Fox 2 News came out. They had never seen a line like that in Birmingham, [Michigan]. The owners of the Filmore said they had never seen it so packed for a Rap concert; it was more packed than Gucci Mane, and even more than Mike Posner when he was there. I was surprised, appalled, happy. Couldn’t believe it. I used to perform across the street at Club Bleu about a year and a half ago, for like 100 people. Sometimes, they wouldn’t even be looking at me or paying attention to me. And I’m eager to I shed a tear and everything. If there was anybody more happy, I can’t  imagine, because I was  just on a whole ‘nother level. And I’m eager to take it to a higher level than that. I want to sell out the Fox Theater, I want to sell out Commerica Park, I want to sell out Ford Field. I’ve got a burning desire man, and I figure the best way to do it is to take over the world.

DX: One thing some Detroit artists have harped on is how they’ll get love all over the world, but won’t get as much when they’re back at home.

Big Sean: I think Detroit is a place where you really have to earn their respect. They’re not going to fuck with you off-rip, and they’re not going to fuck with you. It doesn’t matter who you’re signed to, who you are. “I don’t care what you’ve done. I got a cousin that can rap better than you, I can rap better than you, my sister can rap better than you.” That’s the whole mentality here. But when they see somebody who really strikes them, you’re the man here. Kid Rock is the man because he’s really proven himself. Trick Trick is the man here. You really have to gain people over and gain their respect, and prove why you deserve that spot. Once you do that, they support you like hell, man. And that’s the best way, I feel like.

DX: On a Mick Boogie mixtape a while ago, you were on a song with T3 and Black Milk. Did you get to the go to the studio with them for that song?

Big Sean: Royce [Da 5’9] is super down to earth. He’s a legend in my eyes, the way he puts shit together is untouchable. He’s one of the best out, and I say that with confidence. And I’m proud of that, he’s actually from the exact same hood as me, same street and everything. Like 6 Mile and Curtis, around that area, Northlawn and shit. He’s exactly from the same place as me, and I’m proud that everything is working out for him with Slaughterhouse and Shady [Records], because he really deserves it. He’s an absolute O.G., for real.

DX: You’ve been to the studio with T3, Black Milk, Royce, and I’m sure a bunch of other Detroit artists. What are some things they’ve ever told you or taught you, whether it’s musically in the studio or otherwise, that have helped you go further?

Big Sean: Just hearing peoples’ stories and what they’ve had to go through personally is always helpful, especially in my situation as a newer artist. Royce has definitely been through a lot, same for Black Milk and a lot of these people. They definitely give their two cents, which helps me out so much. Everybody I work with in general, I think I learn from. Even people like Wiz Khalifa, Mike Posner, Black Milk, Royce Da 5’9”, T3, Pharrell, Kanye [West], even Jay-Z. Being in the studio with people like that have helped me out and taught me so much.

Big Sean: Coney Island is in everybody’s neighborhood. It’s something that people can come to to connect with. Kids after school go to Coney Island, you go with your homies to meet up and get some good food. It’s food they make on the spot. It’s definitely some hood shit, but it’s good. It has soul to it, it has feeling to it. People make that food with real feeling, man. That’s why I think a lot of the Coney Islands are still in business, and people support them so heavy. I personally like the grilled chicken pitas, the fried pitas, chili cheese fries, all that type of shit. It’s just so good, man. I don’t know what it is about it. And it feels good. You can always relate a Coney Island to your hood, and I feel like that’s why people relate to it so well.

DX: News also released recently that half of Detroit’s public schools may be getting shut down for budget cuts.

Big Sean: Yeah, I heard about that. I went back to Cass High School when I brought MTV here, and they were telling me they were shutting down a lot of the schools. That’s real disheartening. There’s certain schools, like Cass, Renaissance and King where people really had to take a placement test to get into, and they’re just thinking about throwing everybody into schools like that that try to go above and beyond. It’s tragic, and I think it’s something that people can help control by going out and voting for certain things. That’s the most important thing. People can control their own destiny, especially in our city. I just think it’s important to go out and vote for whatever best benefits your city. And these elections are all important, it’s not just the presidential election. Even with the last election for the House of Representatives, I was disappointed with how many people didn’t go out for that, and how many Republican seats were taken. That really just makes it way harder for [President Barack] Obama. But it relates to whatever on a bigger level and a smaller level. I think people need to sign petitions, vote, and put money back into our public schools. I commend (Detroit native and former NBA player) Jalen Rose. He’s starting his own charter school in Michigan. I don’t know if it’s in Detroit, but it’s going to be in Michigan. He’s really committed to that because he feels a certain way about this too, and I thought that was some real O.G. shit to do.