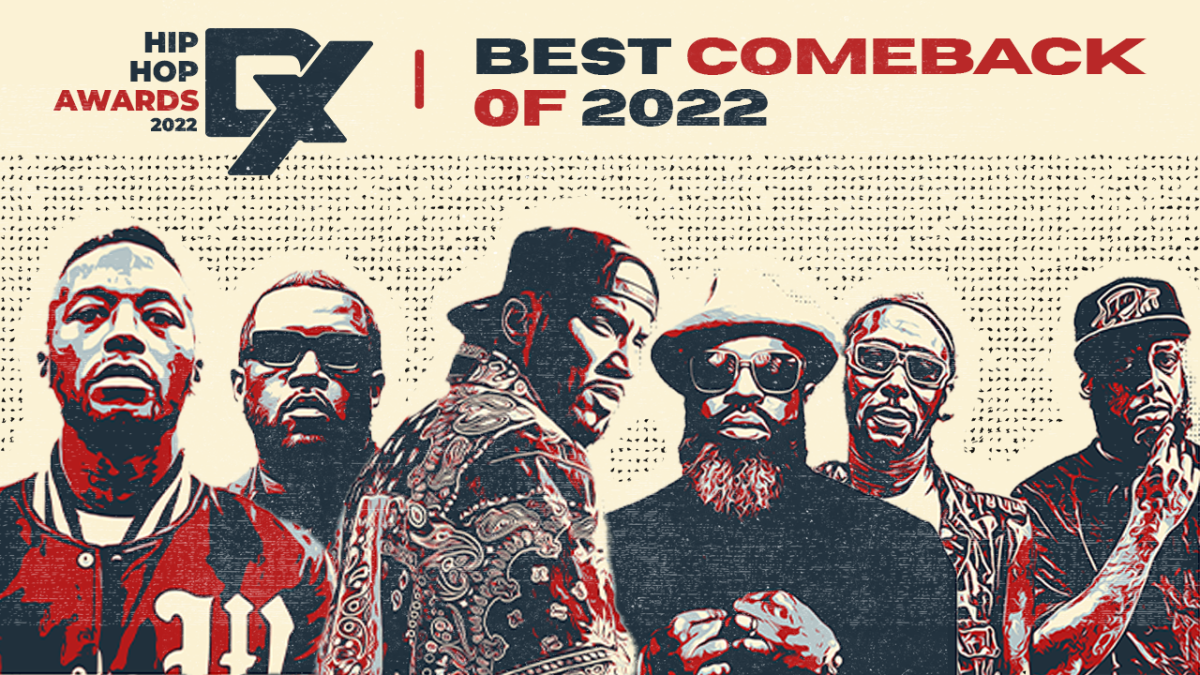 If Drake and Beyonce’s respective albums proved anything, it’s that 2022 was all about being back outside. The dancefloor-friendly Honestly, Nevermind and Renaissance provided a fitting soundtrack to a world re-emerging from the worst of the global COVID-19 pandemic and reconnecting with one another in the flesh. That was certainly the case in the music industry, with festivals, tours and events coming back in full force.

But it wasn’t just A-list superstars that took advantage. A number of veteran rappers also re-established themselves in 2022, feeding their fanbases with long-awaited releases and, in some cases, treating them to a few surprises. For all the debates about the “relevancy” of Hip Hop’s OGs that raged this year, these Comeback of the Year nominees dispelled the theory that rap is strictly a young man’s sport.

The 2022 Hip Hop COMEBACK of the Year award goes to… 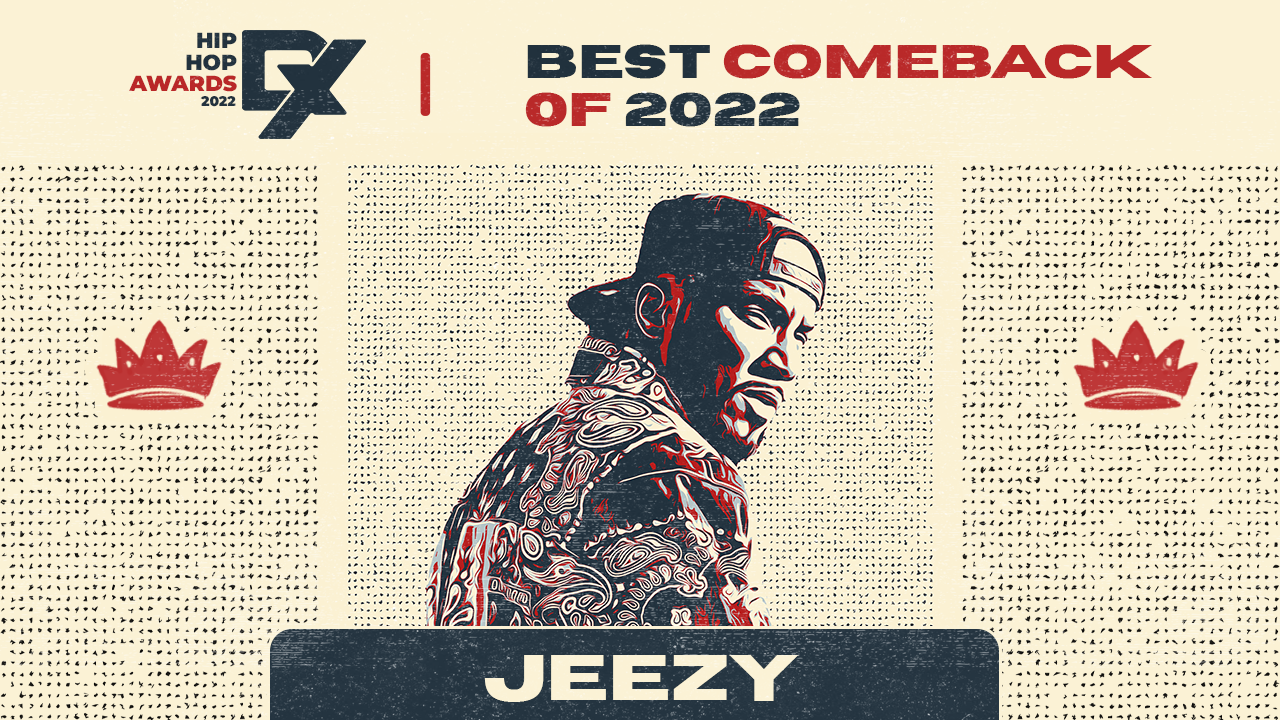 Having watched the trap sub-genre he helped popularize in the mid ‘00s continue to grow and dominate, Jeezy proved this year that he’s still one of the best artisans of the artform. Reuniting with Gangsta Grillz general DJ Drama, who helmed his classic mixtape run early in his career, the Snowman shook off the complacency that plagued his last few projects and returned to form on his strictly-for-the-streets Snofall project. That sense of nostalgia mixed with renewed hunger also carried over into Jeezy’s B-Sides concerts in Atlanta and Detroit, where he treated day one fans to deep cuts from his mixtape catalog. Outside of the studio, the CTE boss welcomed his first child with his wife, Jeannie Mai Jenkins, and continued to grow his real estate empire, which includes “half of Atlanta.”  While he may have never fully left, this year was a return to form musically for Jeezy making him the winner of DX’s 2022 Comeback of the Year. 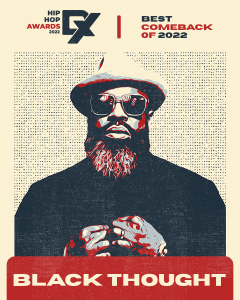 After kick starting his career as a solo artist with his series of Stream of Thought projects, Black Thought delivered the album every fan had been fiending for in 2022: Cheat Codes, his long-awaited collaboration with Danger Mouse. The decade-plus wait didn’t disappoint, with The Roots MC and Gnarls Barkley producer delivering a rich yet rugged listen that made for one of the year’s strongest rap albums. Tariq Trotter was also pleasantly active on the guest feature circuit, delivering standout verses on Black Star’s No Fear of Time, Saba’s Few Good Things and Meechy Darko’s Gothic Luxury. Meanwhile, he continued to branch out beyond rap, making his theatrical debut in the off-Broadway play, Black No More, while releasing an animated children’s musical series for Disney and a slavery documentary for Netflix alongside his Roots bandmate Questlove. 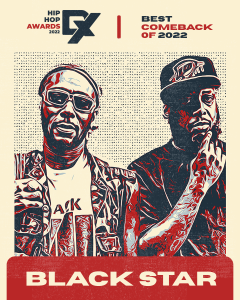 2022 was the year the long, almost quarter-century wait for a new Black Star album came to an end. Produced entirely by Madlib and recorded guerrilla-style over four years, No Fear of Time found Yasiin Bey (f.k.a. Mos Def) and Talib Kweli rekindling their chemistry while serving up lyrical sermons on everything from race and politics to self-worth and spirituality. While the album remains unavailable on most streaming services (it was released exclusively on Luminary, the podcast network that hosts Bey, Kweli and Dave Chappelle’s Midnight Miracle), the usually enigmatic Brooklyn MCs kept themselves in the public eye by performing on SNL for the first time and delivering standout verses on Westside Gunn’s Hitler Wears Hermes 10, while Bey laid down a fantastic feature for J.I.D’s The Forever Story. Would it be pushing our luck to ask for that Mannie Fresh-produced project we were promised a few years ago? 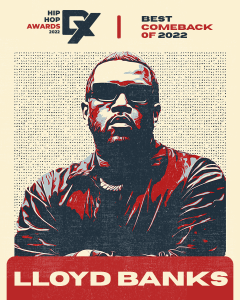 Lloyd Banks set the stage for his comeback last year with The Course of the Inevitable, his first album since 2010’s The Hunger For More 2. And while that project earned its fair share of plaudits, it was this year’s sequel that signaled to the world that the Punchline King was back for good. Bolstered by appearances from Benny The Butcher, Conway The Machine, Jadakiss and others, COTI 2 captured Banks’ lyrical sword at his sharpest, proving that time has only made him more productive and consistent. The former G-Unit soldier also delivered one of the year’s most vicious – and most watched – Funk Flex freestyles. With a renewed hunger for more, it’s likely there’s more where COTI 2 came from. “I feel like I’m fully capable of dropping an album for the next five years,” Banks told HipHopDX earlier this year. “At least once a year, if not twice.” We’ll hold him to it. 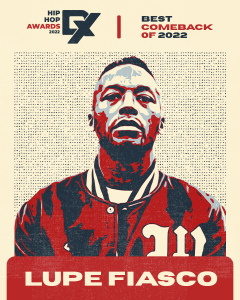 Lupe Fiasco set the bar sky-high for himself when he called Drill Music In Zion his Illmatic while crafting the album, but to say it’s up there with his best work wouldn’t be an exaggeration. Anchored by thumping, textured beats from Soundtrakk – the Chicago-bred producer behind “Kick, Push,” “Superstar” and “Hip-Hop Saved My Life,” among other hits – the 10-track project captured Lupe in impeccable lyrical shape with little filler or fluff. At the heart of his dazzling rhymes were powerful and timely messages, though; “Rappers die too much / That’s it, that’s the verse,” he declared on “On Faux Nem,” leaving the listener to ponder his words for almost half a minute. Even more impressive is the fact that the album was recorded in roughly 72 hours (although Lupe initially set out to finish it in just 24). It’s no surprise then that Lupe was tapped to teach a course on rap at Massachusetts Institute of Technology (MIT). That’s Professor Lu to you.

Return to our Hip Hop Awards nomination page for more categories or check out the nominees for rookie of the year 2022.

Check out our previous Comeback of the Year award winners.