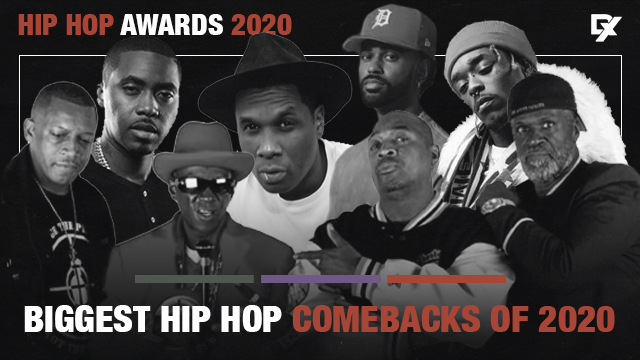 Things move at a breakneck speed in this era of Hip Hop — and with months feeling like years, out of sight spells out of mind for many fans. 2020 has been a rollercoaster that has managed to bring with it some unexpected high notes from artists who were on the quiet side for the past few years, in dire need of a late-career redemption or were over a decade overdue for a breakout.

Jay Electronica dropped his debut album more than 10 years after it was initially promised, Nas and Big Sean returned from hiatus, Lil Uzi Vert finally gave fans what they were looking for and Public Enemy recruited a slew of Hip Hop’s finest for a remix of their classic song “Fight The Power.” But don’t get it twisted, just because these artists had great comebacks doesn’t mean they ever “fell off.”

Every year, HipHopDX staff joins in discussions, debates and sometimes heated arguments to come up with a list for our Year End Awards. You can review all of HipHopDX’s 2020 award categories and nominations. Winners will be announced beginning December 28, 2020.

With the year drawing to a close, HipHopDX takes a look back at the five most prominent comebacks of 2020.

Editor’s note: The cutoff for our awards was December 1. Kid Cudi’s latest album would have definitely placed him in contention for this award if it was dropped prior.

This year’s comeback of the year is…

Against all odds, Jay Elec (finally) gave his fans not one but two complete bodies of work.

In the case of 44-year-old super MC Jay Electronica, 2020 didn’t so much mark a comeback as it did a long-promised album — a clean decade after first signing to Roc Nation. However, fans got even more than they bargained for after actually dropping his debut  A Written Testimony, which prominently featured JAY-Z. In March, his Detox, Act II: The Patents of Nobility (The Turn), leaked online in its entirety in October.

Originally expected to be released on Christmas Day 2009, fans had all but lost hope in Act II — especially when A Written Testimony dropped instead. Upon its leak, Jay announced and followed through on having the LP officially released on streaming platforms.

The Best Hip Hop Comebacks Of 2020

Despite a few setbacks, Sean Don made a triumphant return to form. Three years removed from I Decided — and eight years removed from the original Detroit mixtape — fans were elated at the news that Big Sean’s fifth studio LP Detroit 2 would be dropping in May 2020 (first being announced in March). However, timelines were shifted due to a combination of COVID-19 and (as Sean admitted in an interview) he has perfectionist tendencies.

“I feel like a lot of people have been putting out good music, [but] I’m trying to put out my best music I’ve ever done,” the Motor City MC told DJ Khaled.

The long wait didn’t appear to put a damper on the LP though, which debuted at No. 1 on the Billboard 200, giving Sean his third straight seat atop the chart. It also topped the US Rap chart; all his solo studio albums to date have managed to do the same.

After some false starts and a brief retirement, Uzi’s long-awaited Eternal Atake delivered. Following the immense success of his Billboard 200 chart-topping debut Luv Is Rage 2 featuring his seminal single “XO Tour Llif3,” anticipation for his sophomore LP Eternal Atake reached a fever pitch. Unfortunately, Uzi made fans wait, despite dropping glimmers of hope. He first announced the album in a series or July 2018 Tweets, later — scrubbing his Instagram and posting album artwork and a snippet of “New Patek.”. In December 2018, he noted the album was complete but in January 2019, he announced he was erasing all his music and retiring, putting the album’s future in limbo.

The album finally came to fruition in March, debuting at No. 1 on the Billboard 200, but that wasn’t the only new music fans got this year. Patient day ones were also rewarded with Lil Uzi Vert vs. the World 2 (both a deluxe version of Eternal Atake and a sequel to the 2016 mixtape of the same name) as well as Pluto x Baby Pluto, a collaborative LP with Future.

The Queensbridge luminary leaves Illmatic in the past with a modern-day classic. In the 27 years after the release of his holy grail of Hip Hop Illmatic, Nas has crafted a hefty and heavily debated catalog of music, with a good portion of his mid-career run hampered with polarized takes on his ability to select the right production. Still, in a year filled with more lows than highs, Nas managed to release King’s Disease. This contemporary classic will ultimately define his greatness for a generation of listeners who may appreciate it but are too far removed from his debut to grasp the hype behind his pen game.

With Hit-Boy at the helm, Nas proves his bars have aged like the finest of wines. Should this ultimately become the 46-year-old MC’s final swing, it provides the type of closure his more rushed, seven-song Kanye-produced NASIR never could.

Following a breakup hoax, PE returns to Def Jam for their highest charting album in years. This September, revolutionary icons Public Enemy blessed longtime fans with their fifteenth studio album What You Gonna Do When the Grid Goes Down?. It was their follow-up 2017’s Nothing Is Quick in the Desert and the first in 22 years on Hip Hop staple Def Jam Recordings (their last LP on the label being He Got Game). Though, the well-received release wasn’t without its share of lead-up controversy.

Chuck concocted an Orsen Welles-inspired break-up ruse this past March, only to later reveal the joke was on all of us for only paying attention to drama. He promptly released the low-key, but endearingly poignant Loud Is Not Enough under Enemy Radio — a side project of Chuck’s with DJ Lord and The S1W. As a proper group LP, What You Gonna Do When the Grid Goes Down? stands as a powerful catalog addition — its apex being a 2020 version of their legendary “Fight the Power” featuring Jahi, Rapsody, Black Thought, YG, Questlove and Nas. It was also their best chart performance in many moons, peaking at No. 26 on Billboard’s US Top Album Sales chart.

Over a decade in the making, Extinction Level Event 2: The Wrath of God is a return of Busta Rhymes in full form. Twenty-two years removed from E.L.E. (Extinction Level Event): The Final World Front, he revives his end-of-days theme alongside a stellar cast of MCs and producers like Nottz, 9th Wonder, DJ Premier and more.

Be sure to check out some of our other Year End Award Categories and articles below: