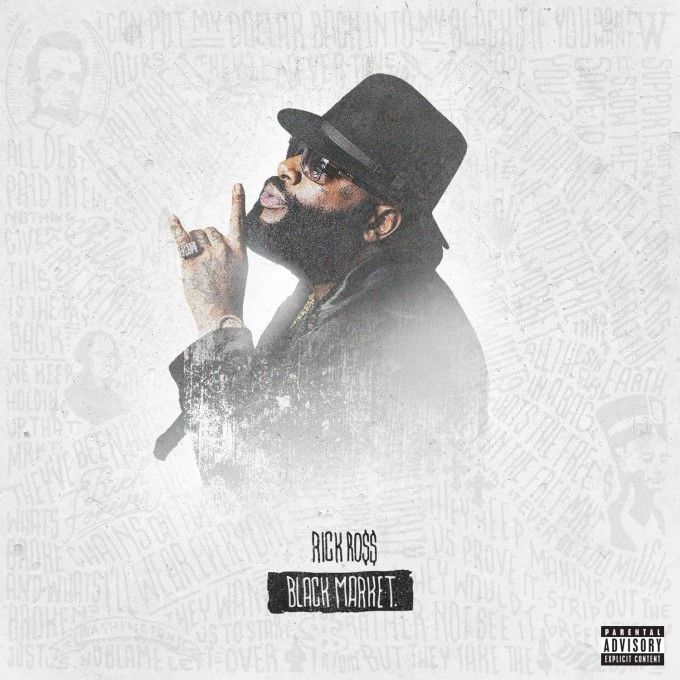 There was a little commotion a few weeks back in which super producer Metro Boomin shared a string of thoughts on Twitter voicing his opinions on rappers trying to copy Future’s career year. His Twitter tirade basically concluded with him advising rappers not to put out too many projects in such a short amount of time, because, unlike Future, there won’t be any quality in the quantity.

Sure, Future has had a great year, but if there is a discussion about rappers who deliver high-quality projects year round, then Rick Ross has to be mentioned. The self-proclaimed boss has released five substantial projects since the beginning of 2014 with varying degrees of effectiveness. This time, though, he mostly gets it right on his latest release, Black Market.

Black Market comes in the form of an official LP and serves as a follow-up to September’s Black Dollar mixtape. However, his most recent release prior to Black Market was the Renzel Remixes, which were a collection of remixes, freestyles, and throwaways.

For most rappers in the game, dropping three projects in one year seems unfathomable because, well, what else is there left to rap about? Fortunately for Ross, 2015 continues to be an eventful year right until the end. Issues with his fiancé, his MMG cohorts, and the law all keep Ross’s year full of stories and inspiration.

It has become general knowledge that Rick Ross’s pen game has significantly improved. There has been such a drastic improvement that one might say Ross is modern Hip Hop’s most improved emcee, save for a few inglorious missteps. He has developed leaps and bounds since Port of Miami and on Black Market, you can hear it louder than ever.

He has become such an improved lyricist that it is no longer his guest appearances that make him shine. People used to look to Ross for a thundering chorus or quick 16 about money, women and power but nowadays, Ross is at his best when he is solo on a track. His longer, more intricate verses are becoming more exciting to listen to. Luckily he brings both skills to this album.

Although an unconventional structure, Ross has six songs solo songs in the middle of the album, bookended by six tracks with featured guests. The solo songs flex Ross’s ability as an actual rhyme slinger whereas the featured records showcase his natural collaborative spirit. A vast majority of the time this would make for poor album flow, but even after the first play through, it works.

“Free Enterprise” starts the album with John Legend, which is a solid start but, honestly, it sounds like it’s been done before. There is a handful of Ross featuring “male R&B singer” tracks that we all have on our iTunes; most of them following an almost identical arrangement. On the other end of the spectrum “Sorry” with Chris Brown is the album’s best-featured track and perhaps the strongest on the album. The transparency is unlike anything we’ve really heard before from Ross. Subliminally, opening up about his recent relationships makes for a smooth listen with a meaning. “Temporary thrills, all these women you think I tossed / My feelings genuine, disregard what you see on blogs” is a refreshing break from the usual player-pimp persona he exudes through almost all his music. In fact, all of Ross’ collaborations are top notch. Future, The Dream, Mariah Carey and a few more all bring their best to the table perhaps as a coincidence or perhaps due to Ross’ aptitude in two-way music making.

If you asked Hip Hop fans to describe Rick Ross’ music up until a year ago, words like “turn up,” “big choruses,” “street anthems” and “simple” would all come up. Although this isn’t wrong, the Ross we are hearing on Black Market doesn’t fit all those categories. On that six solo song stretch, from “Silk Road” all the way until “Black Opium,” Ross is more of a bar-for-bar rapper than a turn-up rapper. Songs like “Python Crocodile” create a luxurious atmosphere that might want to make you feel like your Honda Civic is a ’62 Maybach. Whereas a song like “Color Money” gives Ross a chance to speak his mind on this summer’s Drake vs. Meek Mill beef – and it’s clear whose side he took, all of Black Market’s beats are triumphant yet smooth, opening up the perfect pocket for Ross to pour out some top notch rhymes. Saying Ross has totally reinvented his sound would be a little much, but there is certainly no “B.M.F.” or “Hold Me Back” sounding tracks on this album.

All in all, Black Market does its job. It doesn’t hit as hard as some previous albums, but it surely proves just how good Rick Ross can be as a songwriter and collaborator. It also proves how sharp he has become as a rapper. There may not be a thundering single that the album is built around, but, for the most part, Ross’s consistency fills that gap quite nicely.