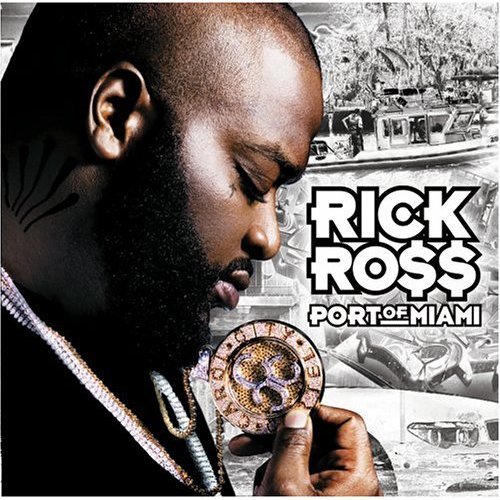 Miami has had its share of Hip Hop exposure, but
Dade County seems to have a new swag these
days. Easily the United States’ premier vacation & real estate playground
for Hip Hop royalty (Diddy, Jay-Z,
Russell Simmons, Dr. Dre, Will Smith and several other A-listers own homes
in Miami) Miami boasts world-class shopping, nightlife, and culture. If Rick Ross has his way, Miami, FL
will be the next major city to make waves in the industry. His Def Jam debut Port of Miami
is a coke-manifesto of deals, hustles, and life in the forgotten parts of the
305.

Unfortunately Miami, FL is also among the nation’s leading cities
in the illegal smuggling of cocaine- a fact alluded to in Ross’ title. The six foot, 290 lb Ross is not shy about it, or about his expertise in getting,
cooking, & flipping that “all white”. Track titles like “Blow (Feat Dre. of Cool & Dre),”  “For Da
Low (produced by Jazzy Phae),” “White
House,” and “Pots and Pans” all tackle the dope game from different angles,
with a clever blend of humor and honesty probably not seen since B.I.G.’s “Ten Crack Commandments.”

What struck me the most about this album is Ross’ ability to represent Miami
without “reppin” for Miami.
If you’re familiar with the stereotypes associated with Miami, then you know that Rick Ross doesn’t fit the bill. Neither
does his music. At the same time, he comes across as unmistakably hood – with a
certain authenticity to his dope-boy content. The art in tracks like “Push It”
and “I’m Bad” and comes through loud and clear, representing a lyrical
departure from the sassy in-your-face style championed by Slip-N-Slide partners Trina
and Trick Daddy and the bass-heavy
booty shaking of Luther Campbell
before them. But don’t be mistaken, the album reeks of Miami with countless tracks sounding like
they sampled the score from Scarface.

Ironically, Ross does at times sound
like Miami’s
other big man Shaquille O’Neal, with
a flow that tends to mumble. He also sounds extremely polished and rehearsed,
which only contradicts his raw persona. Port
of Miami doesn’t stray from an increasingly popular formula for Hip Hop
albums- complete with a ghetto anthem (“Cross That Line” featuring Akon), hardcore thug tracks (“Where My
Money,” “I’m A G” featuing Lil’ Wayne and
Brisco) a club track or two (“I’m
Bad,” “Hustlin'”), and a couple of introspective/autobiographical tracks (“It’s
My Time,” “Prayer”). In fact, Ross
sums up his story on the album’s final track Prayer: “A prayer is what saved me/ I should’a been indicted; now my kids know
Jay-Z.” There is, of course, a “baby-you-know-I-love-you” track (“Get Away”
featuring Mario Winans), but Ross skipped the obligatory shout-out
track, instead opting for the plainly disrespectful “Hit U From The Back.” The
album’s second-half does wear on a bit, but then again there’s only so much you
can say about cocaína. Fortunately there’s also a bonus remix of “Hustlin'” featuring
Jay-Z and Young Jeezy with verses that you have got to hear to believe over
the (slightly slipped) “Hustlin'” beat. Though good as it may be, the already
bloated 20 plus track album could’ve gone without a remix.

A few disappointments aside, Port of Miami
is a very respectable portrait of a very well-connected Rick Ross. What he lacks in rhyme skills he makes up in street
credibility, charisma and quality production; the end result is a flawed yet
sincere effort to show us the darker side of the Sunshine State.
Ricky Ross has still got that dope.