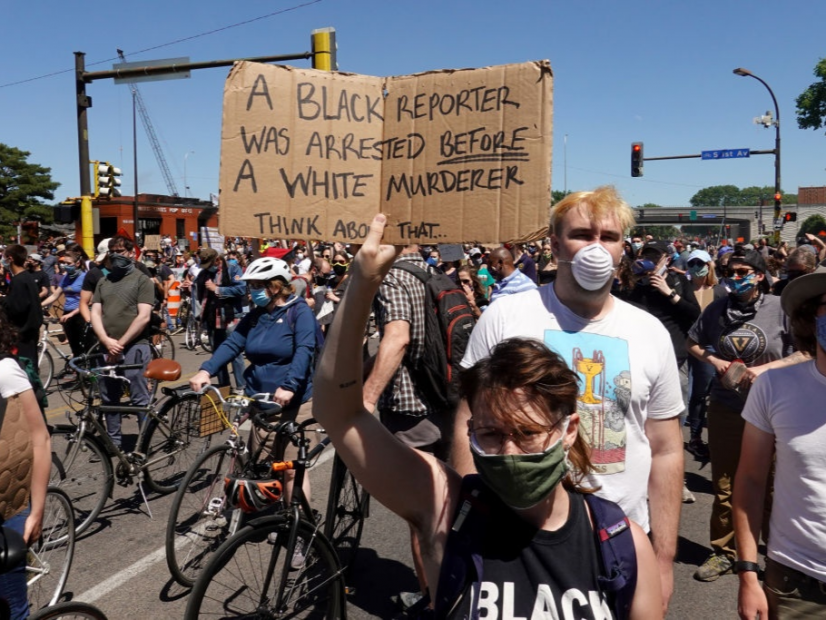 This week in Hip Hop, outrage flared across the nation as yet another unarmed black man, George Floyd, was killed in police custody. Trae Tha Truth, Lil Keke and more mourned Floyd’s death on social media and revealed his Houston rap roots and connection to DJ Screw.

Also, Hip Hop leaders like T.I., Ice-T and Meek Mill rallied behind protestors and demanded justice for Floyd in the days leading up to ex-Minneapolis police officer Derek Chauvin’s arrest.

Finally, Freddie Gibbs and The Alchemist closed out the week with their surprise joint album, Alfredo.

Sign and share. The link is in @officialrockyrockett bio #Repost @officialrockyrockett with @get_repost ・・・ Please sign and share. The link to the petition from @colorofchange is in my bio. Screw community… please take 3 minutes to sign and share. Here is the Petition: Dear Mayor Jacob Frey and District Attorney Michael Freeman, I am outraged and disturbed by the killing of George Floyd at the hands of Minneapolis Police Department officers. For seven minutes, George Floyd and bystanders cried out and pleaded for his life as your officers choked him to death in broad daylight. This is an act of police violence committed on an innocent, unarmed Black man. No one deserves what happened to George. And it’s up to you to grant justice. I’m calling on you, the Mayor, to 1) block their pensions and 2) ban them from becoming police officers ever again. And DA Freeman must immediately charge all four officers with murder. We’re counting on you to secure justice for his family.

In the days after George Floyd’s death, it was revealed that the 46-year-old Houston native had rapped under the moniker Big Floyd and appeared on multiple DJ Screw mixtapes. Screwed Up Click members Trae Tha Truth, Lil Keke and E.S.G. mourned the loss of their friend on social media.

“Minneapolis Police, Murdered My Homie In Broad Daylight,” Trae wrote on Instagram. “… This Was A Good Man, He Always Helped Out In The community and wit the kids and More.”

“He Lost A Lot Of Family in Life And Now Y’all Murder Him,” he added. “Your Only Reason You Say is because a check didn’t go through!!”

Floyd died in police custody on Monday (May 25) in Minneapolis after police officer Derek Chauvin kneeled on his neck for almost nine minutes. Chauvin was later fired from the Minneapolis Police Department, along with three other officers, and was arrested and charged with third-degree murder and manslaughter on Friday (May 29).

This week, Hip Hop leaders — ranging from T.I. and Chuck D, to Ice-T and Meek Mill — responded to the police killing of George Floyd. On Instagram, T.I. organized a nation-wide #BlackOutDay2020 boycott, where he encouraged all people of color to avoid shopping on July 7.

“We need one day of solidarity in American when not one black person in American spends a dollar,” he posted. “This includes Africans, Native Americans, Asian-Americans, Hispanics… ALL people of color. Together we have 3.9 trillion dollars in economic spending power. That’s $10,684,931,506.80 it’s going to cost per day next time a person of color gets shot!!!”

Freddie Gibbs & The Alchemist Link Up For Surprise Album Alfredo

To close out the week, Freddie Gibbs and The Alchemist joined forces on a new joint LP called, Alfredo. Gibbs only gave fans one day’s notice of the collaborated effort, which also sees appearances from Griselda Records’ Benny the Butcher and Conway the Machine, Rick Ross and Tyler, the Creator.

Alfredo serves as the follow-up to Gibbs and Alchemist’s last joint project, 2018’s Fetti, with Curren$y. To celebrate its release, the producer/rapper duo has also shared a video for Alfredo cut, “1985.”

Speaking with HipHopDX this week, Quando Rondo expressed his admiration for two of his QPac collaborators, Polo G and Lil Durk.

“Lil Durk is a legend, but it’s like he isn’t even recognized for that shit big bro,” he said of the Chicago native. “I used to listen to Lil Durk when I was 12, and he was on the XXL cover and shit like that… That man has set a lot of trends and look at how long he’s been rapping.”

“[Polo G] comes from the slums, he takes care of all his partners and he can rap for real. He isn’t faking, and I know he’s living what he says because he grinds,” he continued. “I fuck with him because I know he’s just like me, but I feel like he’s going to make it further than me at a faster pace because you can tell he has the mindset.”

Check out Part 1 of Quando’s interview about his debut album here.

Last Wednesday (May 20), Montana of 300 trended on Twitter after he offered half a million dollars to any Chicago MC that could out-rap him. This week, Montana revealed to HipHopDX which Windy City artists he’d had in mind and why he’s “not surprised” his challenge hasn’t had any takers.

“I’m not surprised at all. It doesn’t cost anything to have a comment,” he shared. “I said I’m the best, and there’s a whole lot of people that’s disagreeing with me, but nobody – as far as rapper in Chicago – has said they’re the best. If I’m not [the best], then who is?”

Being named the most underrated rapper by Eminem is no easy feat. After KXNG Crooked received the mega-compliment from Slim Shady, he expressed his gratitude for the shoutout to DX.

“That means a lot coming from a Jedi man,” the former Slaughterhouse rapper explained. “I’m grateful for his willingness to speak positive things about me in public because he doesn’t have to. I guess sometimes it takes a master to recognize another one. Thanks for showing me because I know to thank him now.”