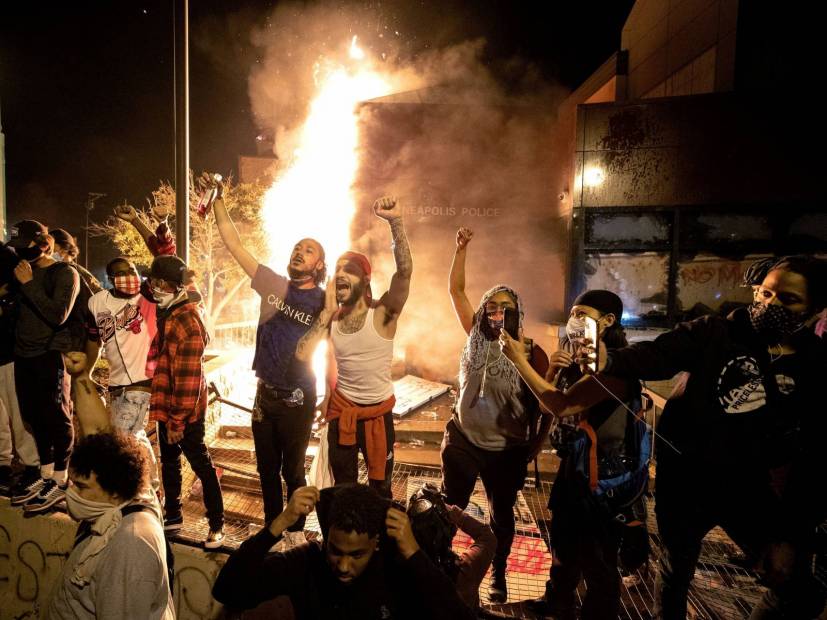 by Kyle Eustice
18
This Is America -

A Minneapolis Police Department precinct was torched by protestors on Thursday (May 28) as tensions mount over the police killing of 46-year-old George Floyd.

Tear gas was expelled in downtown Denver as rioters smashed in the windows of Colorado State Troopers’ vehicles. The 101 Freeway in Los Angeles was shut down by a mob of people, bringing traffic to an abrupt halt. A California Highway Patrol car was swarmed by dozens of protestors in an attempt to stop the officer from moving forward.

In Columbus, Ohio, police deployed pepper spray as the number of protestors continued to grow. Stores were looted, pawn shops set on fire and local buildings were littered with graffiti that read, “Justice For George Floyd.” These are just a few of the scenes that erupted across the United States this week in the wake of Floyd’s death.

Adding fuel to the fire was Donald Trump who tweeted on Thursday night, “These THUGS are dishonoring the memory of George Floyd, and I won’t let that happen. Just spoke to Governor Tim Walz and told him that the Military is with him all the way. Any difficulty and we will assume control, but when the looting starts, the shooting starts!”

….These THUGS are dishonoring the memory of George Floyd, and I won’t let that happen. Just spoke to Governor Tim Walz and told him that the Military is with him all the way. Any difficulty and we will assume control but, when the looting starts, the shooting starts. Thank you!

But the anger from the Hip Hop community and beyond is much more palpable. Floyd is yet another name added to the ever-evolving list of black men and women killed by white police officers.

A viral video of the incident shows the moment Minnesota police officer Derek Chauvin puts his knee on the back of Floyd’s neck as he repeatedly shouts, “I can’t breathe!” Although he was taken to the Hennepin County Medical Center, he was ultimately pronounced dead.

All four officers have been fired but no charges have been filed. According to CNN, prosecutors still haven’t moved to file. In a press conference, Hennepin County attorney Michael Freeman  said there’s evidence that doesn’t support a criminal charge.

“It is a violation of my ethics to talk and evaluate evidence before we announce our charging decision,” he said. “And I will not do that. I will say this, that video is graphic and horrific and terrible and no person should do that. But my job in the end is to prove he violated a criminal statute.

“And there is other evidence that does not support a criminal charge. We need to wade through all of that evidence and come to a meaningful decision and we are doing that to the best of our ability.”

Ice Cube, Chuck D, Ice-T, Redman, Thundercat and Common are among the many hitting social media with their commentary.

On Friday (May 29) Killer Mike gave a heartfelt speech in his hometown of Atlanta addressing the situation between protesters and the local police department. Mike teared up during the speech as he showed his support for the Black Lives Matter movement.

Check out Hip Hop’s reactions below.

Remember this: It ain’t no fun when the rabbit got the gun.

“You know how we think.” #deadprez #georgefloyd #minnesota???

My eyes welled with tears viewing this. It shows a turning point in the war that Trump is waging. That’s not hyperbole. Destabilizing the election. Press freedoms compromised. Steel yourself. Expect more of this. Then ask yourself: what will you do? pic.twitter.com/oc6zpqQskx

The pact of protection of the violating beyond his job offender by any means necessary above the law is what draws the ire . https://t.co/xWhgnHstjg

When civility leads to death, revolting is the only logical reaction.

The cries for peace will rain down, and when they do, they will land on deaf ears, because your violence has brought this resistance.

We have the right to fight back!

May Our Queen And Kings Rest In Paradise While Agent Orange Tweets “When The Looting Starts,The Shooting Starts”.

Everybody in Minneapolis standing up for George Floyd. I respect y’all ????

As my father explained during his lifetime, a riot is the language of the unheard.

Amerika ?? This is yet another moment where we are given the opportunity to come together, to create a new beginning The yogi is “born again at every moment “ let‘use this new experience to stimulate activists and create more support for the changes necessary Any “spiritual person is servant of God or the collective therefore she is an activist for good Show up , Post , or pray for change Do what you can

We have some organizing to do & some “leadership” to oust, but we are galvanized! We built this shit & we’ll burn this shit to the ground if need be!

Anyone supporting the movement that isn’t black, is getting my support right back. Thank you.