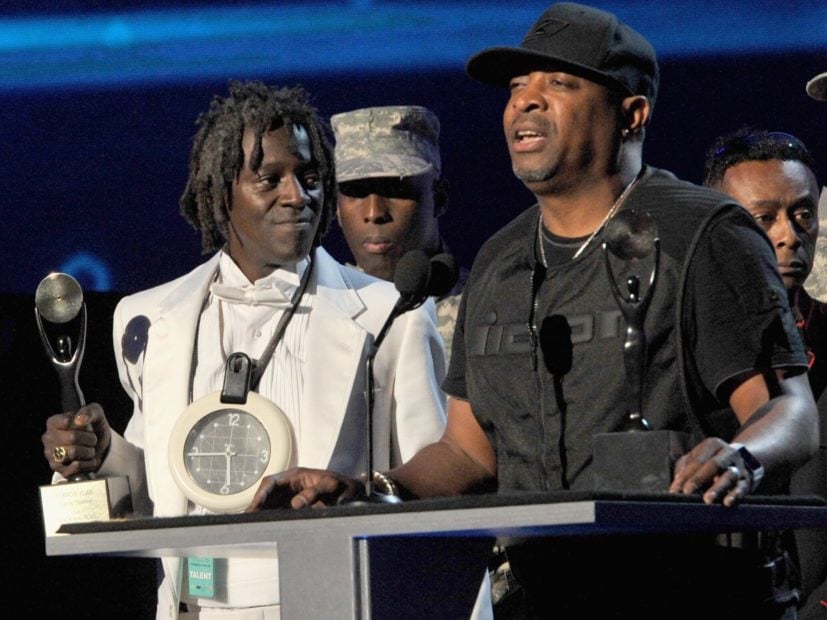 “Flavor chooses to dance for his money and not do benevolent work like this,” he said in a statement to HipHopDX. “He has a year to get his act together and get himself straight or he’s out.”

Chuck’s attorney went on to explain, “From a legal standpoint, Chuck could perform as Public Enemy if he ever wanted to; he is the sole owner of the Public Enemy trademark. He originally drew the logo himself in the mid-80’s, is also the creative visionary and the group’s primary songwriter, having written Flavor’s most memorable lines.”

“We have become aware that Flavor’s bandmate and Public Enemy co-creator, Chuck D, has endorsed Bernie Sanders’ candidacy for President and plans to perform at an upcoming Sanders Rally,” Friedman wrote. “While Chuck is certainly free to express his political views as he sees fit – his voice alone does not speak for Public Enemy.”

The letter, obtained by Billboard, goes on to say the Sanders movement is a “fake revolution” but insisted Flav wants nothing but “unity.”

“Flav is reaching out, not in the spirit of division, but for the sake of unity in the hope of preserving the integrity of the Public Enemy Movement and the faith and trust his millions of fans around the world have placed in him,” Friedman added. “Over more than 30 years in the public spotlight – whether on television or radio – Flav has always delivered his authentic self. That authenticity compels him to speak out to ensure voters are not misled and that Public Enemy’s music does not become the soundtrack of a fake revolution.”

Flav filed a lawsuit against Chuck and BTNE  [Bring The Noise and Eastlink] in 2017, a suit which was dismissed without prejudice last year.

Chuck has been more than patient with Flav over the years. Public Enemy’s latest record, Nothing Is Quick In The Desert, was also a point of contention as Flav’s unwillingness to work was more of an issue than the actual lawsuit.

“Flavor isn’t 100 percent wrong, but he brings a lot of craziness and disorganization to the fucking table, and that causes a myriad of issues that costs time and money,” Chuck said at the time. “His inability to be focused, pay attention and stay woke bleeds into other areas. Him and his manager [Greg Johnson] parting ways, to me, was a bad move.

“I’m proud of Flav, but he’s a co-owner of the masters of these Public Enemy records. That doesn’t necessarily mean songwriting. It takes effort and teamwork, and he’s got to be mentally on point to write P.E. songs. He has to step it up.”

While speaking to DX earlier this week, Chuck noted the Public Enemy Radio performance wasn’t really an endorsement, more of a call-to-action.

“This is spring of 2020, a year of hindsight and clear vision,” the pioneering MC told DX. “It’s no longer tolerable to just pontificate and not do shit. The Bernie rally is not so much of an endorsement as it is common ass sense. People gotta realize, whoever they vote for isn’t going to be Jesus. They should recognize we have a wannabe Hitler in the White House.

“That’s it. Clarity. If there’s anything that resonates with me, it’s I hate the two-party system. But we’re all affected by health care, child care and climate change. What the fuck is going to take care of that?”