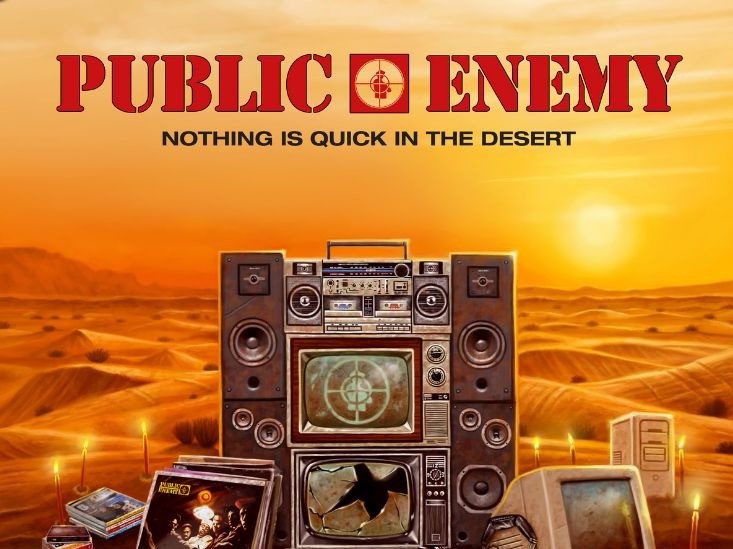 Days after Public Enemy frontman Chuck D confirmed a new Public Enemy album was on the way, the revolutionary Hip Hop group has decided to drop it six days ahead of its original release date. Titled Nothing is Quick in the Desert (Except Death), the 13-track project bursts with social commentary on everything from reality television to weapons of mass distraction (i.e. internet, phones, TV).

From a Belgian stage, where Chuck D is playing with his supergroup Prophets of Rage, he offered a few words on the early release, likening it to “the football term of the quarterback sneak.” This year also happens to mark Public Enemy’s 30th anniversary as a group.

“It was best to do it now as opposed to later on in the year,” Chuck D tells HipHopDX. “This is our 30th year as Public Enemy. Doing a Public Enemy record 30 years later was key. We’ve been working on it all along with the Prophets of Rage record. What more can we ask for from our fans that have been dedicated to us for 30 years? This one’s on us.”

While some Hip Hop purists may be hoping for another It Takes A Nation of Millions To Hold Us Back or Fear Of A Black Planet, Chuck is adamant it’s a “rock idiom” to try to recreate something done in the past. Not surprisingly, the avid sports fan used a metaphor to describe the albums.

Chuck D is highly respected among his peers and Nothing is Quick in the Desert (Except Death) capitalizes on those relationships with features from Ice-T, Easy Mo Bee and PMD of EPMD as well as production from Daddy-O of Stetsasonic Professor Griff and DJ Pain 1, and scratches provided by DJ Lord and Mike Redman. Of course, Chuck’s omnipresent sidekick and original Public Enemy member Flavor Flav is along for the ride. Public Enemy’s 1999 album, There’s A Poison Going On, was the first downloadable album ever and the new album carries the tradition.

“If the internet is here, what’s our proper use for the internet?” he asks. “Is it a toy or a tool? There are so many ways to tie the world together. It’s called the world wide web and you can web people for good, too. I’ve wanted to do this [free album] for a very long time. We had to wait for the world to catch up. We did the first downloadable album ever — There’s A Poison Going On — in 1999. Public Enemy helped usher in the internet age in Hip Hop. We are a part of that revolution that introduced the internet to everybody from a musical standpoint. It’s 30 years later and almost 20 years since we first got engaged with the internet, and we’re releasing another record.”

Like other projects he’s been a part of, Chuck says he poured his heart into every song on the follow-up to 2015’s Man Plans Gods Laughs.

“There are five stages of every record song — recording performing, belief of the song and bleeding the song,” he explains. “It’s a five stage process that I’ve put into any song I do. Recording is not just enough. It never is or never should be easy. Art is a matter of tastes. Everyone has all kinds of tastes, especially now. There are more diverse tastes out there in culture and arts than ever before. Have to stay strong to your beliefs no matter what and be able to defend it, bend it and beat them all.”