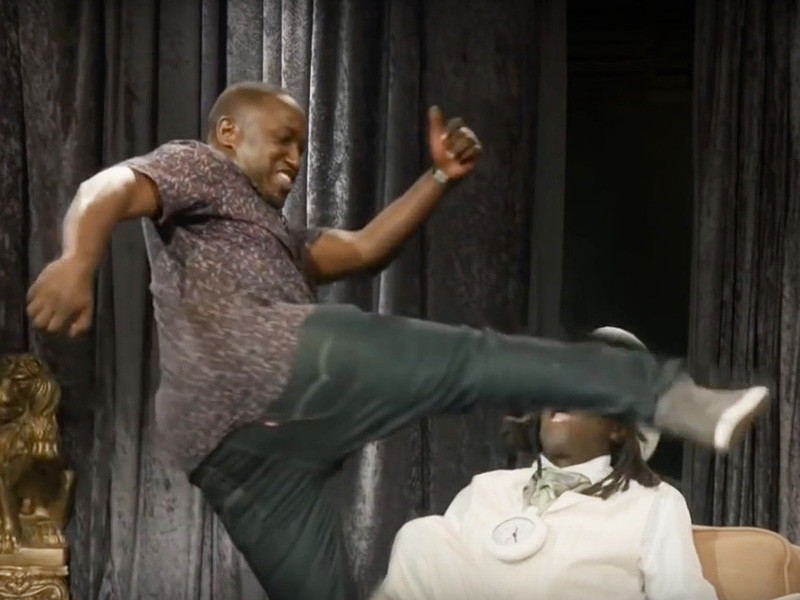 Rapper, legendary hypeman and reality television star Flavor Flav has taken to social media to call out Eric André and Hannibal Buress for the widely circulated (fake) footage of Buress kicking Flav in the face during his guest appearance on “The Eric André Show” this week.

From the outset of the 90-second clip, André is disparaging of Flav, who had immediately begun to explain his intention to release a solo album before even sitting down. André let the rapper finish before remarking “What in the god damn hell are you talking about?”

André also dismissively sips a milkshake as Flavor Flav answers questions, while Buress interrupts the 57-year-old in order to take a selfie with him — and that’s just the first half of a 90-second clip.

The real drama starts when one of the show’s sound guys “accidentally” touches Flav’s crotch while “fixing his mic,” causing Flav to lose his temper and threaten the host. André responds by breaking his desk apart to reveal a bathtub, stripping naked and climbing inside.

The moment of contention shortly follows, when Hannibal Buress mumbles “This show is stupid” to himself, before appearing to kick Flavor Flav right in the face — complete with martial arts movie sound effects. The clip ends there.

At first glance, Buress does appear to make contact with Flav and many media outlets indeed ran with headlines akin to “WATCH FLAVOR FLAV GET KICKED IN THE FACE!” — but according to Flav, that’s not how it really went down.

Flav offered his own account of events on his Twitter page, saying “Do not believe that bullshit video of me being kiked [sic] in the face good editing job folks.”

@2DopeBoyz @ericandre @hannibalburess
Do not believe that bullshit video of me being kiked in the face good editing job folks::
Flavor Flav

When media outlet 2DopeBoyz shared a .gif of the incident, Flav hit them again, saying “Great comments coming from sour motherfuckers like you.”

Flav continued his tirade against the 2DopeBoys Twitter account, tweeting “keep sucking that Dick you Boyz !!! Must be nice for your mouth you fucking assholes,,”

@2DopeBoyz @hannibalburess
keep sucking that Dick you Boyz !!! Must be nice for your mouth you fucking assholes,,

Flav’s rant also spilled over onto his Facebook, were he wrote “People asking about that B.S. Eric Andre show. That kick in the face, NEVER HAPPENED. That’s some Bullshit editing done to disparage Flav. Yo Eric Andre – FUCK YOU for that move gee – Flavor Flav.”

When confronted by someone in the comments section beneath the post, Flav appeared to confirm that he wasn’t paid for the appearance.

Both Buress and André seem happy enough to fan the flames without directly responding to Flav’s rebuke. André has retweeted several links to stories reporting Flav’s Twitter outburst, and Buress has given a typically muted response, simply tweeting “what?????”

As for what really happened, it’s not as if anybody can say for certain — the clip is heavily edited with many sharp cuts between the dialogue. All we’ll say is that if this is how fiercely Flav defends his pride, we imagined he’d have defended his face a little better.