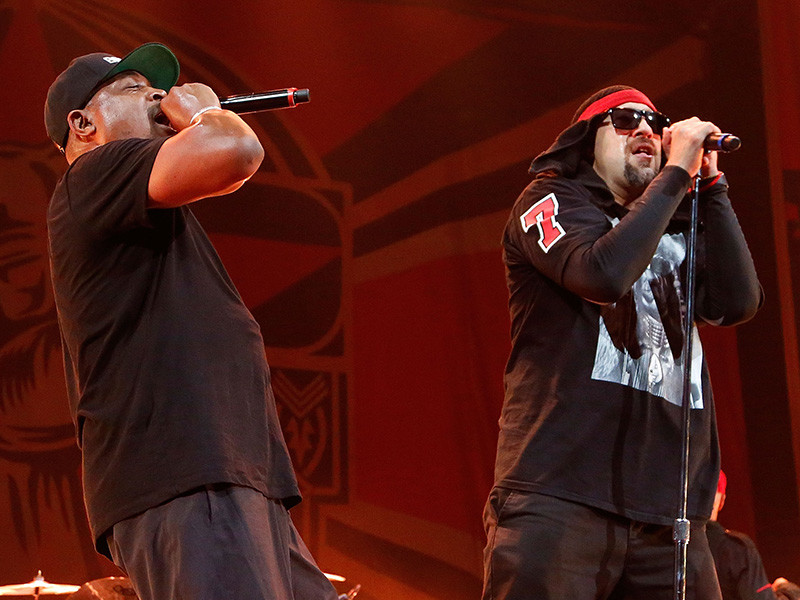 As Prophets of Rage descended on the nearly sold-out Red Rocks Amphitheater in Morrison, Colorado last Wednesday (September 7), an uncontainable excitement permeated the crisp mountain air. Cypress Hill’s B-Real, Public Enemy’s Chuck D and DJ Lord, and Rage Against The Machine’s Tom Morello, Tim Commerford, and Brad Wilk took command of the stage from the moment the first note of Public Enemy’s 1988 track, “Prophets of Rage,” blasted from the massive stack of speakers behind them. They had arrived.

Since forming earlier this year, Prophets Of Rage’s mission has always been clear — make America rage again. Kicking off the current tour in Cleveland, Ohio on July 17, they timed the first date to coincide with the Republican National Convention, where presidential hopeful Donald Trump was speaking. Using music as their weapon of choice, they ignited a wave of protest with the intent to influence the audience to stand up for what they believe in. Rather than using the type of angry fear-mongering Trump has become synonymous with, Prophets Of Rage took a different approach.

“It’s definitely a different kind of anger,” B-Real told HipHopDX. “I think his is more about hate. Ours is more about waking people up and caring about what’s going on enough to inspire the right people to gather and make some change — that’s the difference to me.”

Chuck D, the always outspoken, politically charged frontman for Public Enemy, takes a global approach. To him, it’s bigger than a national crisis.

“We’re musicians, so one thing that sets us apart from a lot of this is we go around the world on the regular,” Chuck explains. “We look at the world as a one ‘Earthizen’ type of thing. We fight for our human rights, and right now, there’s a campaign going on to limit our human rights. You have immigration telling you where you can and can’t go on the planet Earth, what you should do, what you should grow, what you can’t eat. As musicians, we answer to that really clearly. That goes beyond any politics. That’s why it’s a scary time. With 60 days to go [until the election], you’re really talking about presidential agendas that talk about limiting human rights.”

The members of Prophets of Rage want people to be inspired to do something about the current cultural climate. They want to evoke a sense of outrage about the injustices around the world, but in a constructive way.

“People want to buy a home without banks telling them they can’t,” Chuck says. “People in their hometowns are walking past boarded up houses owned by banks when they need a house. It’s almost like you have a government that doesn’t understand a 25-year-old might have three kids. They think you’re a kid, you’re not a person that can run things in a society, but they have three kids. They need insurance and health care. But the powers that be are running it from an older point of view and saying, ‘Oh, it’s not your time.’ That’s a contrarian disposition to the agenda going on in this ‘election.’ Very few people are talking to 30-and-unders like it’s their country, too.”

“They shouldn’t even call it an election,” B-Real adds. “It’s a selection. We get two choices, A or B, but the one we choose is C — none of the above.”

The Prophets of Rage’s tour placards summed it up perfectly: “Nobody For President.” It’s a simple statement, but one that speaks loudly.

“We just want people to ‘stay woke,’ as they say,” Chuck asserts. “Pay attention to what’s going on.”

“It takes a lot to rock out there, but being vocal about what we believe in makes it fun,” B-Real adds. “We are all passionate about our beliefs and why were doing it.”

The Prophets of Rage tour continues through October.