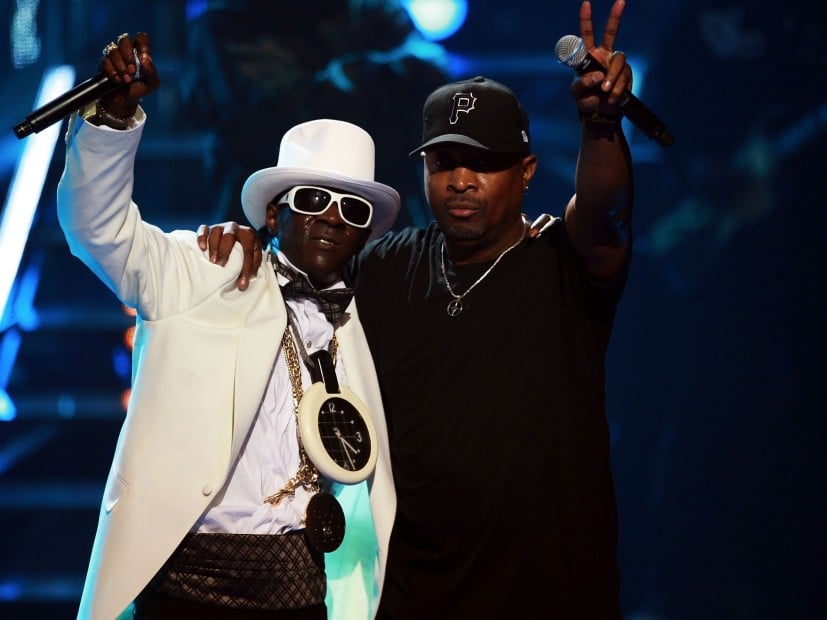 While Chuck’s name is mentioned in the court documents reportedly filed by Flav, it’s his partner Gary “G-Wiz” Rinaldo — member The Bomb Squad and owner of the company Eastlink — that he’s really after. Chuck’s name is only tied to it because of a merger between his company — Bring The Noise — and Eastlink [BTNE] that took place in 2007.

Like Chuck’s brother, Eric Ridenhour, said in a Facebook post, “The lawsuit or TMZ is not going to tell you that it’s a company in which my brother’s name is associated in.”

But we are — with Chuck’s help.

“Flav and his people sued me in connection to albums, merch and essentially non-communication and non-payment, but BTNE was the third party that was supposed to account to Flav and everyone else,” Chuck explains to HipHopDX. “Gary [Rinaldo] ignored it. Flav is in Las Vegas doing Vegas things in casinos. Public Enemy hadn’t worked in a year because I wasn’t working without an album and a plan.”

Flav took to Instagram on Thursday (August 31) to clear the air, writing, “#ATTENTION EVERYONE!! this is Flavor Flav speaking himself … I love my partner Chuck D everyone so don’t get it twisted .. we will fix it!!”

#ATTENTION EVERYONE!! this is Flavor Flav speaking himself,,,I love my partner Chuck D everyone so don't get it twisted,,we will fix it,!!

While the gesture is slightly reassuring that this won’t be the end of Public Enemy, there’s a sense Chuck is still feeling thwarted. After all, without Chuck, Flav never would’ve landed a record contract with Def Jam Recordings in 1986. Rick Rubin of Def Jam initially wanted Chuck as an MC, even though he was more of a songwriter, but Chuck insisted Flav and the rest of his crew were part of the deal.

But the lawsuit isn’t really what has Chuck upset. It’s more about BTNE not paying Flav and Flav not meeting his obligations to the group.

“The recording thing is based on licensing breakdown,” he explains. “Fifty percent goes to the publisher, 50 percent goes to the masters. It was set up easy, so if Flav did write a song, he would still own part of the master. You gotta pay that. How often is Flav getting accounting for the albums we started put out in 2012, 2013? It was one of those, ‘They’re getting around to it.’ I’m like, ‘What the fuck, man? For three to four years?”

Public Enemy’s latest record, Nothing is Quick in the Desert, was also another point of frustration for Chuck as far as Flavor’s involvement. In fact, he’s more annoyed with his unwillingness to put in the work than the lawsuit itself.

“Flavor isn’t 100 percent wrong, but he brings a lot of craziness and disorganization to the fucking table, and that causes a myriad of issues that costs time and money,” Chuck says. “His inability to be focused, pay attention and stay woke bleeds into other areas. Him and his manager [Greg Johnson] parting ways, to me, was a bad move. The new manager is amateurish in their decision making. I’m proud of Flav, but he’s a co-owner of the masters of these Public Enemy records. That doesn’t necessarily mean songwriting. It takes effort and teamwork, and he’s got to be mentally on point to write P.E. songs. He has to step it up.”

Flav reportedly said he wrote 50 Public Enemy songs and hasn’t been properly compensated for any of them. Chuck begs to differ.

“What 50 songs?,” he says. “You can’t name 10. Trust me, I want you to write 50 songs. You can’t write 50 meaningless songs regarding Public Enemy. He’s 58-years-old. By now, he should know how to write a song that reflects his age. He’ll write a song that reflects a 21-year-old. You’re the old dude in the club. I’m not asking you to grow up all of a sudden, but god damn.”

Chuck admits that because of the third party, BTNE, Flav didn’t see a dime from merchandise sales, but he knows Flav’s situation can easily be fixed.

People can lighten up on Flav. It's his new mgt that vengefully felt that suing a 3rd party & connecting me was a good move for him #stupid pic.twitter.com/FW1SriX30v

“I was more upset at Flav missing his deadlines and being adamant about not working, and rejecting the work on the new P.E. album,” he says. “I was more upset at that, and the unwillingness to do benefits and things of that nature. I wasn’t upset about the lawsuit. Someone had to take the weight, but it doesn’t mean the third party should be negligent on accounting. Flav can be fixed. I don’t think my situation can be fixed as easily. There’s a series of individuals I’m very disappointed in. If things aren’t resolved very soon, I’m going to have to file a lawsuit of my own by October 1.”

I cant accept @PublicEnemyFTP not doin benefits because Flav refuses to do em.So I head to Houston w @prophetsofrage we have done 8 in 1year pic.twitter.com/hbWJaRPRZh

For now, Chuck is focused on his upcoming self-titled Prophets of Rage album. The aforementioned Public Enemy album was given away for free and Chuck finds it quite telling that this lawsuit drama is getting more attention.

“It just shows you how it is today,” he says. “We do a gesture in honor of 30 years of Public Enemy and give away a formidable album, and we get more press about the drama than the actual record, which shows you where we are today. But it comes with the territory.”

He adds, “There’s people in this camp that have lost sight about what’s important. I’m a firm believer you pay other people before you pay yourself. If the ship goes down, you go down with it last. You don’t throw them under the water and take the lifeboat. Period.”

The author of this story also does a radio show with Chuck D.