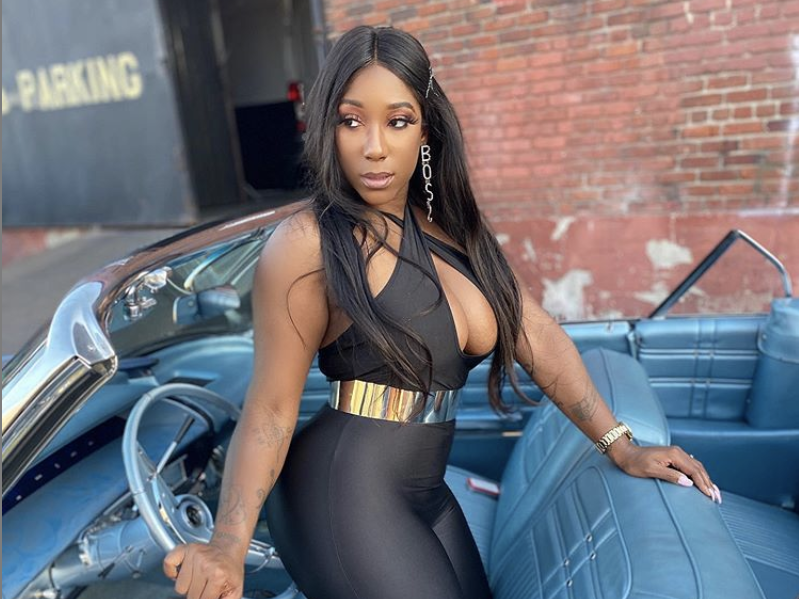 Los Angeles, CA – Between being a multi-hyphenate creative and starring on this season of Love & Hip Hop: Hollywood, Brittany B. obviously has a lot on her plate.

From songwriting for the likes of Terrace Martin, Bhad Bhabie, Ledisi, Tyla Yaweh, working as an A&R for Warner Music and pushing herself as a solo artist, the Compton native seems different from the fame chasing members the series appears to pump out.

However, don’t be fooled — she brings plenty of drama herself as well.

“Just last year, I was writing and working with Bhad Bhabie and now I’m at a record label working alongside being on TV,” Brittany told HipHopDX over the phone. “Who knows what the future is going to bring?”

Evidently, the future includes releasing more of her own music and eventually watching the world react to the newest artist she’s developing, Blac Chyna.

Elsewhere in the DX interview, Brittany explains the reason for trying reality television, what artist development means in 2019, her latest single “Reputation,” working with Blac Chyna and more.

HipHopDX: For someone of your esteem who has worked with a ton of notable artists on the songwriting side, is an executive at a major label and has momentum within her own solo career, what was your reason for joining Love & Hip Hop: Hollywood?

Brittany B: I really think that Love & Hip Hop is a good platform for African-American people. I say that because we don’t have that many shows for music and entertainment. The story of who I am as someone who has all these accolades and reputation, you need to know who I am. So, name another platform with that many viewers who would introduce someone like me? There’s a lack of that. There’s a lack of platforms like that introducing individuals who represent young, black Hollywood. I understand that Love & Hip Hop has its own reputation of being a drama-filled soap opera but, overall, I don’t think it hurts the brand. I think it helps the brand.

HipHopDX: Is it awkward going into the Warner Music office now or do people there ask you about episodes you’ve been in?

Brittany: Yes, I do get people asking me what’s going on and have a lot of questions about the show. I don’t think it’s that different though honestly. It’s mostly the usual questions of is it real or fake.

HipHopDX: A lot of people caught on to you through your work with Bhad Bhabie and now you’re working with Blac Chyna. From your perspective, can you describe artist development in 2019?

Brittany: I feel like there’s a lack of artist development these days. Because we took the time to develop Bhad Bhabie as an artist, that’s why she was successful. You can’t skip the process from A to Z. You have to do A, B, C, D, etc… You have to do the middle work and the groundwork. Someone like Chyna who is a part of pop culture, black culture and Hip Hop culture to a degree, she was perfect to come on Love & Hip Hop with me. It’s just to tell my story but introduce this new chapter for her new life of doing music. With the artist development that we’re doing, I really believe that her music is going to authentic to herself, true and it’s going to be good. That’s the part of artist development that people miss is making sure that the music is authentic and not just for the trend.

I’m not working with her just because of her name, but I’m working with her because she has a story. That’s what good music is supposed to be — your story on record. It’s whoever you are sonically. With Bhad Bhabie, that’s what worked with her because we actually took the time to know her story feels like, sounds like, what is she saying and how does that come together musically. I think it’s time. I think it’s determining what that brand is. For Chyna, it’s the same thing. It’s interesting with artists these days. Some necessarily don’t have a brand or story but, cool songs. That’s not good development. That’s not even being an artist really.

HipHopDX: So when should we expect music from your collaboration with Chyna?

Brittany: Oh, I can’t say that yet. Just know that we have a number of records ready. You might be seeing something very soon.

HipHopDX: In regards to your solo work as an artist, how much has or do you expect Love & Hip Hop to help that aspect of your career?

Brittany: I feel like Love & Hip Hop as I grow with the show, my brand will as well. It goes hand in hand. I feel like more than ever, people know more about me and the many layers of me. Me being an artist, me being an A&R, me being a songwriter and ultimately being a young black entrepreneur in Hollywood. So it gives you a boost in that area which is the purpose.

I want little girls to see me and say they can do that. I want them to feel like they can be a Sylvia Rhone or Ethiopia Habtemariam, that I can be Cardi B the next day and that I could also be Ester Dean the next day, I can wear multiple hats. I don’t look like the average A&R. I don’t act like the average A&R and I do my job well. I want that aspect to be shown. I’m grateful for Love & Hip Hop in giving me the opportunity to show that and promote that.

HipHopDX: You also just released your new “Reputation” single. Can you discuss that for a moment and your upcoming project?

Brittany: My number one strategy is just to release good music and quality content that is true to me. Something that 10 years from now, I can listen to again. I think it’s important for me to continue to drop music because as a creative, it’s my resume. It’s how I continue to show people my gift and my talent aside from placements and working with other artists. As my platform grows bigger and bigger I want to make sure that I do that. In regards to the project, expect some big features and some singing, rapping and some soul. I’ll be dropping in first-quarter sometime next year.

HipHopDX: As an A&R, you essentially serve as the middle person between the label and the artist. What does your average day look like?

I’m also reading sessions, working with songwriters and meeting with artist managers who have artists, producers, and songwriters. That’s typically my day-to-day. The coolest part of my job is that I can literally do it anywhere. Those meetings might not take place at an office. It might take place at a pool or restaurant. You can listen to music anywhere. You can connect with people anywhere. That’s typically what my day is like. Or, I might be with Blac Chyna at the studio.

YALL KNOW I KEEP IT REAL! ? Am I being too hard on them, or am I right to be apprehensive about the tour? #LHHH

HipHopDX: For someone who has worked with everyone from Terrence Martin and Ledisi to Bhad Bhabie and Freddie Gibbs, how do you keep yourself so creatively versatile?

Brittany: I just did a record with DJ Mustard. I did a record that’s coming out with Summer Walker and Kash Doll. It’s definitely diverse. I do that by being flexible with the state of music. Just understanding it and always being ready to listen and learn. I listen to a lot of music. I may play Dreamville on one track and on the other is Rico Nasty or Daniel Caesar.

To me, there is no such thing as genres. It’s just good or bad music. That’s what I’m listening for. I just listen to everything and absorb it. That’s how you’re able to put your spin on things.