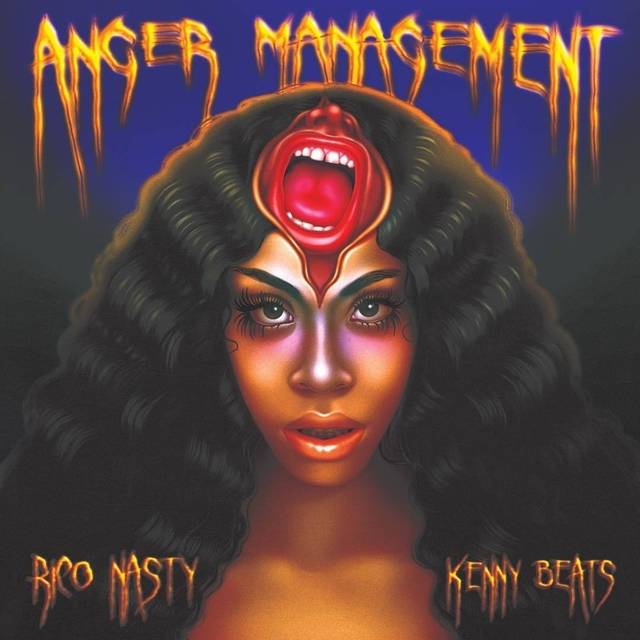 With last year’s excellent mixtape Nasty, Rico Nasty established herself as one of Hip Hop’s most energetic artists. Her follow-up to last year’s success, Anger Management, is a collaboration with producer Kenny Beats that’s similarly packed with aggressive punk rap. Though the mixtape definitely has moments of irreverent fun, it’s an imperfect and monotonous effort. Despite it’s experimentation and mostly solid production, Anger Management ultimately can’t live up to the expectations set by its predecessor.

Anger Management opens with “Cold,” a ruthlessly hard hitting banger. Rapping along to an abrasive, distorted beat, Nasty lands every boast and punchline with gusto. She paints a picture of her new life as a reckless rockstar, exuding her distinct brand of charming chaos. This energy carries over to “Cheat Code,” another aggressive banger that has the punk rapper kinetically spewing witty boasts and taunts.

In terms of quality, much of the mixtape doesn’t match the first two tracks. Quite often, Nasty and Kenny Beats are either recycling ideas or serving up lukewarm scraps. “Hatin” heavily samples Jay-Z’s The Black Album classic “Dirt Off Your Shoulder.” On the chorus, she renders Hova’s lyrics into a feminist empowerment anthem: “If you feelin’ like a boss bitch, go’n/ Go to the club, leave that n****a at home/ If you got your own shit, you ain’t ever gotta listen to him, girl/ N****s be hatin’ on b*tches.” Though there’s something admirably bold about reclaiming a Hip Hop legend’s signature anthem, “Hatin” comes off as cheap and trite.

Besides packing plenty of rage, Anger Management also has Nasty showing different sides of her emotions. However, this is where the mixtape falls short. “Sell Out” and “Again” expose a cutoff point for the artist’s range. On “Sell Out,” Miss Nasty grapples with her fame and opens up about the anger that’s at the root of her artistry. Despite having compelling, self-reflective themes, “Sell Out” squanders it with its drowsy production and Nasty’s sloppy delivery. On the other hand, “Again” is a clumsy attempt at pop with singing that recalls some of Nicki Minaj’s worst croons.

Makeup artist @thescottedit Hair by @wilshears_ ??? #ANGERMANAGEMENT DROPS TONIGHT AT MIDNITE what songs are you excited about

Nasty is at her best when she’s sticking to her ferocious formula. “Mood,” featuring Splurge, is compelling and brutally cold with the two rappers striking up an effortless sense of chemistry. And “Relative” has Nasty succinctly articulating everything she tried to say on “Sell Out.” Over swirling keyboards and dreamy vocals, she lambasts people who are just befriending her for her fame and fortune.

Instead of replicating last year’s hit mixtape, Nasty is clearly set on experimenting and expanding her sound. Even though it shows that she’s a risk taker, Anger Management is unfortunately half-baked.