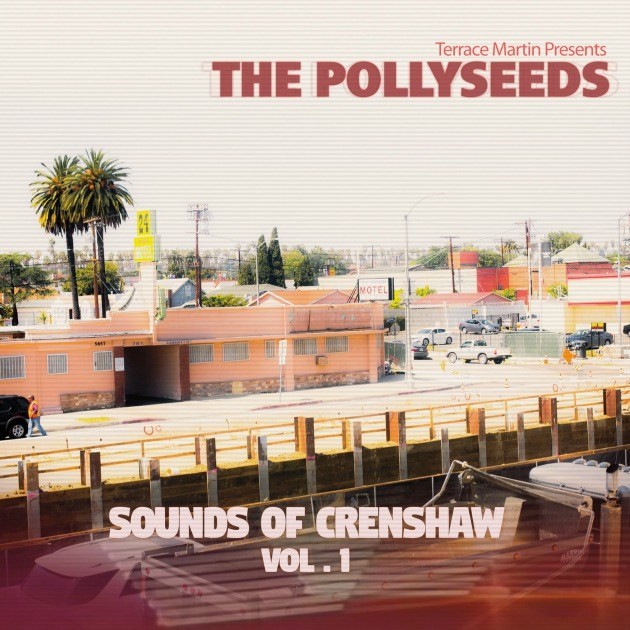 There’s no denying Terrace Martin’s status as a musical architect following his long history of working with everyone from Snoop Dogg to Raphael Saadiq, to Stevie Wonder and Kendrick Lamar. The multi-instrumentalist also knows how to put together some fairly amazing solo projects and compilations that have flown below the radar despite last year’s Velvet Portraits earning him a Grammy nomination. Taking another approach past 2017’s halfway point, he brings along Problem (under his R&B Chachi alias), Rose Gold and Wyann Vaughn for the budding of The Pollyseeds. On their first outing — Sounds Of Crenshaw Vol. 1 — Martin divides time between team captain and star player as his supporting team rises to the occasion at all for all 13 incredibly crafted tracks.

Sounds Of Crenshaw Vol. 1 is sonically split between Martin flexing his jazz, soul, funk and Hip Hop muscles with expertise. The first two records, “Tapestry” and “Chef E Dubble,” are instrumentals that transitions out of its G-funk synths to a jazz number that’s highlighted by Robert Searlight’s stellar drumming, god-like tenor sax playing from Kamasi Washington and Robert Glasper’s co-production.

Both set the stage for Sounds Of Crenshaw Vol. 1’s more two-step friendly joint “Intentions” where Chachi proves his worth vocally outside of being one of the best MCs out of the city. In fact, his performance throughout the album will conjure up a demand for potential R&B album. Though the album leans more toward some jaw dropping instrumentals, “Intentions” does represent a limited amount of songs featuring more traditional “song structure” in a contemporary sense of things. That could be a problem for some, but hearing the remake of Janet Jackson’s 1987 hit “Funny How Time Flies” transition into the Hip Hop infused smooth jazz “Mama D/ Leimert Park” alleviates any real concerns of streamlining.

Thankfully, when anyone opens their mouth for the first note, those vocals are serious. West Baltimore/Los Angeles transplant Rose Gold sweetly sings as she takes center stage on “You & Me” while Vaughn gives some outer dimensional singing on “Your Space.” The same goes for the project’s most radio-friendly track in “Up And Away,” a futuristic G-funk offering. However, Martin saves the biggest vocal performance for last on closer “Don’t Trip,” featuring Preston Harris. In an age where male R&B singers focus primarily on style and vibe, it’s refreshing to hear Harris sang like no tomorrow with various runs on what’s essentially a gospel track.

Sounds Of Crenshaw Vol. 1 feels like the ideal soundtrack to the iconic 23-mile street named after the real estate banker George Lafayette Crenshaw. It won’t transcend to other hoods but Martin and crew win by developing a project that’s sonically ambitious from beginning to end.