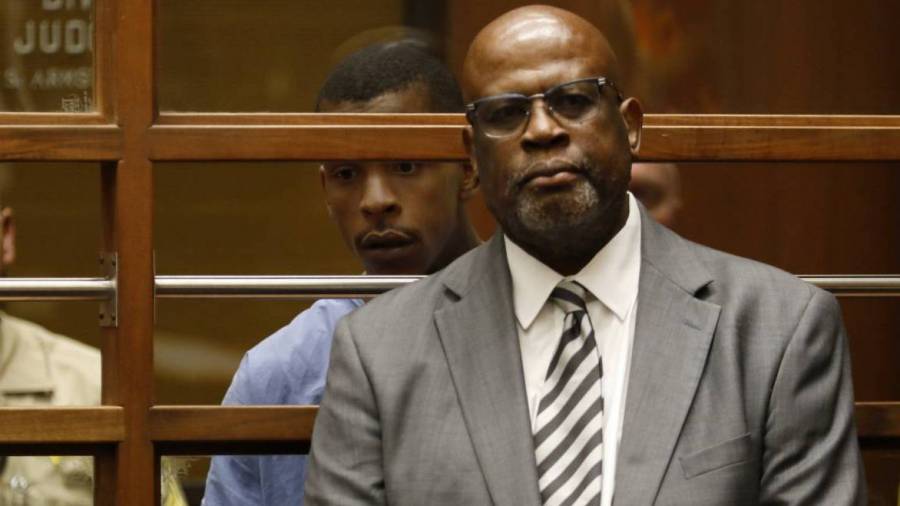 Los Angeles, CA – Chris Darden, the former prosecuting attorney in OJ Simpson’s 1995 murder trial, and target of Meek Mill’s “house nigga” slur, has announced that he will formally withdraw from the case and no longer represent Eric Holder, the 29-year-old man accused in the shooting death of famed Slauson-bred rapper Nipsey Hussle.

Darden took to Facebook early on Friday, (May 10) to partially explain his rationale behind withdrawing from the case in a lengthy post saying, “You guys have been awfully good to me and my family. Thank you. I am on my way to appear for the last time in People v. Holder. I filed a Motion to Withdraw from the case.”

“As for my reasons for withdrawing I don’t know whether I will disclose them later or not. I only know that as a lawyer it is my duty to protect the rights of my clients even in the face of threats or angry mobs. This is the silent solemn oath we took as defense counsel. This is the legacy made for me and all of us who practice as defense counsel in the criminal courts. But allow me to say this; After centuries of a history of black men hung from trees without trial, or after the thousands of cases of black men tried, convicted and executed without counsel; after Gideon v. Wainwright & Powell v. Alabama, I cannot understand why in 2019 some people would deny a black man his 6th Amendment right to counsel of his choice. Or why defending such a man should invite threats not only against me but against my children too,” Darden wrote in part.

The threats invited on his children, that Darden mentions in the post, were captured by his eldest daughter, Jeneé Darden, last month in an Instagram post.

“I’ve been receiving vile comments and messages since the news broke that my father, Chris Darden, is the defense attorney for the man accused of killing Nipsey Hussle,” Jeneé started the post.

“I was not prepared for this backlash that has triggered back memories from the O.J. Simpson trial. My father is a grown man and has been a defense attorney for some time. I have no say in the cases he takes on,” she continues.

Darden alludes to the apparent death threats as a major tipping factor in his decision to drop the case in the post.

“Just as they were in 1995-Cowards never change. These days these cowards don’t send letters instead they sit anonymously behind keyboards threatening a man’s mother and children. And some folks think that’s funny. It isn’t and I won’t ever forget it. To those who issued those threats to my children please pay close attention so there is no misunderstanding. Later. FUCK YOU! As for me, I continue to thrive. I continue to be loved. I continue to walk with kings. And I will continue my pursuit of fairness and justice on behalf of my clients and others charged with crimes,” Darden continues.

The attorney also spoke to the Los Angeles Times on Friday, (May 10) and told them the reason he took on Holder’s case is because he defends the less fortunate.

“I defend poor people — that’s all I do. And he’s definitely poor,” Darden says.

[This post has been updated. The following was originally published on April 5, 2019.]

Multiple reports confirmed Nipsey Hussle’s alleged killer, Eric Holder, pled not guilty to a slew of charges including murder, two counts of attempted murder and one count of possession of a firearm by a felon on Thursday, (April 4).

However, it would appear the news the 29-year-old Los Angeles resident retained O.J. Simpson prosecuting attorney Chris Darden is what really pissed Meek Mill off — enough to call Darden a “house nigga.”

The Dreamchasers head honcho got on Twitter to literally to chastise the attorney and equate him with the trend of “self-hate,” in the black community.

“As self-hate continues in the black community #housenigga,” Meek tweeted along with a screenshot of the attorney with Holder in the background.

As self hate continues in the black community #housenigga pic.twitter.com/N3Y423gXVt

Even before the news of Darden picking up the case the Championships rapper was adamant of the role that self-hate played in the tragic murder of Nipsey.

“Self hate the #1 killer of young black Kings!,” he captioned a photo on Instagram toasting during happier times.

Nipsey and Meek had immensely close ties and were reportedly planning on releasing a joint album according to an interview the Victory Lap rapper did with Real 92.3 in March. The slain rap star commented on Meek’s progression in the interview and praised the rapper saying he felt like he had “elevated.”

Revisit the interview in its entirety below.