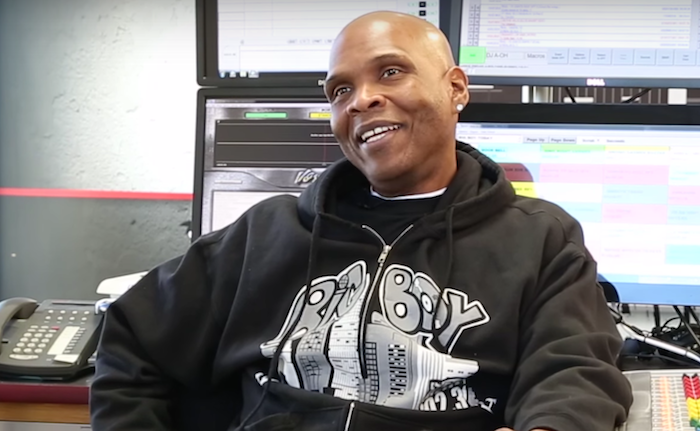 Big Boy On Leaving Power 106: "It Was A Tough Decision"

To say Big Boy is an institution is an understatement. The former bodyguard for The Pharcyde hosted Big Boy’s Neighborhood on Power 106 for two decades, defining Los Angeles radio in the process. A generation has grown up listening to the gregarious host’s take on all things Hip Hop, Pop culture, and life. So when word dropped a year ago that Big Boy was moving neighborhoods, an entire coast reacted.

That was 2015. In the year since, Big Boy has joined Real 92.3, LA’s first urban radio station in 15 years, and taken his new show, Big Boy In The Morning back to the top of the league tables. As Real approaches its Birthday Bash this Sunday (February 28), HipHopDX spoke with the icon about his transition, the decision to leave Power 106, and the challenges that come with changing franchises.

Big Boy: I remember what the first year was like when I first got into radio—doing the Hollywood Christmas Parade and working with the Baker Boys. I remember that, but not like my first song or my first interview. With Real, I know what my first song was. I know what my first interview was because it was the start of something new, so I took a lot more notice to that first day and that first month and that first artist. I was able to lock in my firsts a little more this time.

DX: The last time Los Angeles had a true urban station was 2000. 92.3 The Beat closed after Clear Channel decided to switch formats. Why do you think The Beat wasn’t successful and how can Real avoid a similar fate?

Big Boy: It was successful. Even years later without The Beat being in LA, there’s still a total recall. Whatever made the Beat so-called disappear—if it was competition, if it was money drying up—I think it definitely had an impact. In my career, I know the impact because I had to battle it. It was my job to make sure that I was #1. I knew the impact of what a Theo was and what a John London In The Morning was because I took it head-on. And I’m still here.

DX: Los Angeles has a heavy hispanic demographic. Does that pose a strategic challenge to urban stations in this market?

Big Boy: LA’s a real melting pot. I’ve never been one to say that this is urban and this is this and this is that because when you go to concerts, everybody parties together. I think that’s one thing that I had at Power as well. I wasn’t the demographic, but everybody still fucked with me. That’s what Real is. When I do my morning show, all you need is a grin to get in no matter what skin you in. That’s what I want Real to continue to be. It’s just the station that everybody can go to and everybody can have fun. We party under the same umbrella anyway. Even during my 20 years at Power, I didn’t know what Power was as far as category. I was just like go in, do your job, have fun, play the music. When you go to shows you see what LA really looks like. LA is a melting pot of beautiful places and complexions. That’s what I go to.

DX: Who would you describe as your target audience?

Big Boy: My target audience is LA. What you get from Big Boy is I am LA. My whole life is LA. I can roll you around LA and don’t have to ask Siri shit, don’t have to punch in nothing on the navigation. None of that. My target audience is LA and everybody that’s in Los Angeles built every station that you listen to. They’ll continue to build Real. They’ll continue to build Power. I go after the people that wake up and live here. I do a nationally syndicated radio program, but I super serve Los Angeles. I don’t give Los Angeles nothing but LA. You don’t get no cut downs. You don’t get no, ‘I can’t say LA because my show is running in Louisiana.’ No. Fuck that. I’m here and I’m doing LA radio. That’s why it’s Big Boy In The Morning.

DX: How would you describe Doc Wynter’s management style?

Big Boy: What I love about Doc is that he’s seasoned in the game, but good enough in the game to listen to you. He’s not one of those cats that knows how to be coach and comes in and tells you this, and backs up and let you do it. Then you can go to him and say, ‘Well, this is how we do it here. This is how our listeners get down.’ It’s not just Doc beating on his chest saying ‘It’s my way or the highway.’ My first conversations with Doc was that Doc just wanted to come on and give LA an option and give LA a great radio station. There wasn’t a motive. It was ‘I’m here. What would you like to do?’ We’re here and we’re having fun. I don’t want to come in and have numbers and shit and these woes on me. I’m cool with that. I’ve never been a numbers guy. My thing is make today better than yesterday and tomorrow better than today.

DX: You worked with Fuzzy Fantabulous for years at Power. Then he left to work at Beats. Was it difficult to get him to return to radio?

Big Boy: It couldn’t have been tough because they fired him. I think when they fire you, you don’t really have a decision. You can fake and be like, “I’m leaving!!” But nah, Fuzzy was fired. So it wasn’t a hard decision like, I went to Fuzz and said, “Hey man, this Dr. Dre, this Beats thing, there’s nothing there. I don’t think that’s gonna happen. It was more of he was unemployed, all non-void, walking around like he was Pretty Boy Floyd, soon-to-turn stick-up kid, look what you done did, probably would’ve been sent up for an eight year bid. Nah, he was between work. It was easy to make the deal for Fuzz. It was a no-brainer. He didn’t have a job. [Laughs] You don’t leave Dre. Dre fires you. And that’s what happened.

Me and Fuzz been boys before radio. When I was bodyguard for the Pharcyde, Fuzzy was the light man for the Pharcyde. So when I got into radio, I told Fuzz, ‘Man, they want to hire me for radio. What am I going to do everyday?’ I’d never done radio in my life. I’d always been a personality and I always had fun. But I never did radio. Fuzz was just that familiar face that I would deliver my show to. If Fuzzy’s laughing then they laughing. Fuzz, he’s been my dog. It’ll be sad when I have to let him go… in two weeks. [Laughs]

DX: It feels like Real’s first year’s gone by without a hitch. Where are the challenges?

Big Boy: Are there challenges? Yeah. Did we add some competition now by building a new station? Yeah, there’s competition. But I don’t take it home and super over-analyze. When I leave from here, I got kids. I got a wife. There’s certain things I gotta do. My life is radio. My listeners don’t care about numbers and statistics and all that shit. So I’m not tripping off of that. I gotta leave that to cats that that’s their job to worry about those things.

DX: I’ve never been a market that had a slogan as bold as Real’s. “Real 92.3: Home of Big Boy, Hip Hop and R&B.” It almost sounds like Big Boy is bigger than Hip Hop and R&B.

Big Boy: When you say it that way, it sounds crazy. Also with just being in the marketplace and having your career with a brand for song long that you had to come with “Home Of Big Boy.” You had to come with “Big Boy Moved” because you were so automatic with saying “Big Boy From [Power 106].” It’s tattooed in your brain. So you do have to bang people in the head. I’m a year in at Real and I know that there’s still people that’ll say “Big Boy from Power.” It’s gonna take some time for some.

DX: The artist drops are exclamatory. These are some of the biggest artists in the world and they’re shouting out Real to the point where it sounds as if they’re throwing shade at competing stations.

Big Boy: Some of that stuff you had to set yourself on fire for people to take notice. Me, that’s not the way that I’ve ever done radio. To keep it real with you, some of the stuff was uncomfortable. But I had a conversation with Doc and you do kind of have to set yourself on fire for people to notice. If you’re in a room you’ve gotta scream to get people’s attention. I think that’s where a lot of that came from.

DX: What surprises you most about your first year with Real?

Big Boy: How many people that came with me. You do question at some point whether people will make a switch. ‘Are they gonna move?’ Then you hear certain things like ‘It ain’t gonna last.’ To be a year later and to be in a position that we’re in is a great feeling. You have so many people that root for you. You’ll have some people that don’t. I got to satisfy me first, and my family. If you get on an airplane, the first thing that they do is in the actual event of an emergency, secure your mask first and then take care of whoever. I’ve gotta make sure that I’m happy first. I can’t make you happy if I’m unhappy. Looking back at a year, I’m happy. That’s the main thing. Smiles bring smiles. Even when I was homeless, I was happy. We had a pool at the motel. You couldn’t tell me shit. If I’m happy, my team is right. If Doc is happy, the entire team is right. If Real is happy, then iHeart is cool. It’s so called levels to the game. People in here, it’s just a great vibe. The smiles that you saw from people walking out of the studio, those are real smiles. You wanna get up and be happy and do what you wanna do. That’s why people laugh at us when they’re in their car or at work, because we’re having an authentically good time in here. You can hear that. I’m more than happy.

DX: Was it tough for you to decide to leave Power 106 after two decades of history making?

DX: Real’s first year is in the books. What do you expect in year two?

Big Boy: Now that the traction is there, year two is gonna be a mutherfucker. I already know it.