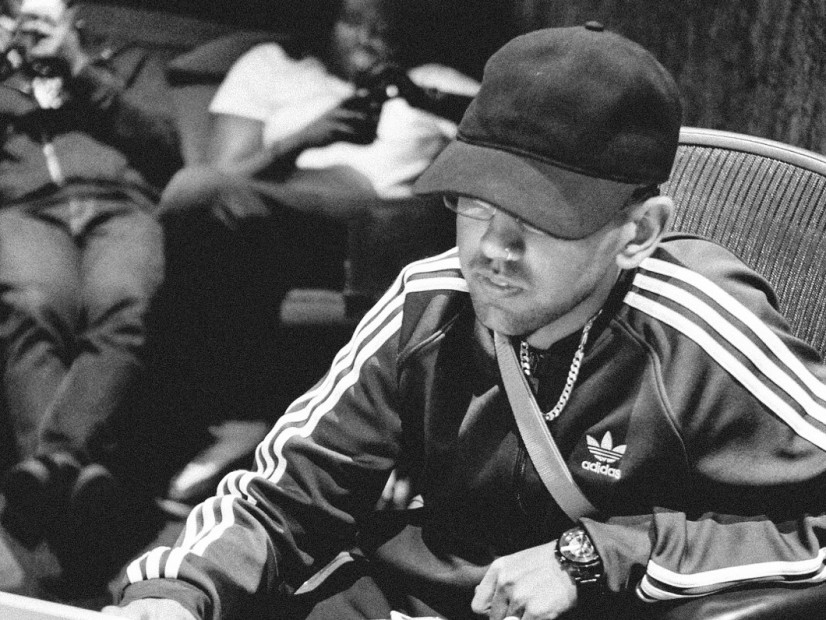 British producer Menace managed to become a Grammy Award-nominated producer off a $200 “Meek Mill-Ace Hood type beat” at just 21 years old. It was a serendipitous transaction that turned into “Panda,” the breakout hit single for G.O.O.D. Music artist Desiigner, which later evolved into Kanye West’s “Father Stretch My Hands Pt. 2” off The Life Of Pablo. This uncommon feat happened within a time span of just two years.

The now 24-year-old producer was previously toiling over broken iPhones as a mobile technician (while also studying law) before making his big break. Menace had been making money online selling beats, but once “Panda” took over, he had a lot to learn in a short amount of time … And he had to learn it quickly.

At the height of “Panda” and The Life of Pablo’s popularity in 2016, Menace had to sit back as U.S. Immigration delved into every aspect of his life because of his government name, Adnan Khan, while opportunities to attend the BET Awards and Grammys slipped away. He also dealt with the fallout of some industry drama, specifically drawing the ire of Mike Dean.

That’s all over now though, and Menace is looking toward the great things he has coming in 2018. Among them, records with Drake, Kevin Gates, Travis Scott and Blac Youngsta appear to be on the horizon.

Speaking on the phone from across the pond, Menace shared with HipHopDX everything he’s been working on and his #DXHitList Sessions playlist. He explains the stories behind some of the songs he’s produced mixed with a few of his favorite tunes, some of which inspired him.

”Panda” — Desiigner —  I had just come home from work and I was just really tired, you know … frustrated. I had my boss yelling at me, telling me I was slacking at work. I was really tired that day. I came home and wanted to make music. Making music to me is like stress-relief. Then I just came out with “Panda.”

“Father Stretch My Hands Pt. 2” — Kanye West — It’s just “Panda” part two. It’s Kanye’s version of “Panda.” He really took it to the next level. “Panda” was great but he really took it to another level. He gives it a slight edge, like adding the meat to the potatoes.

“Through The Wire” — Kanye West —  I remember that one when I was a small kid. It was one of those songs I would listen to when I was going to school. Like how he had the accident and had the jaw surgery. Kanye at that time was the new thing out. He was my go-to. This record really has a special place in my heart.

“Love 2 The Game” — Nines — Something I produced. He’s on his way to blowing up. Tory Lanez was just in his neighborhood a couple of months ago. He’s one of the biggest artists in the U.K right now. It was on his album and was #4 on the Top U.K. albums chart and was #1 on the R&B chart.

“FaceTime for 30” — NO1-NOAH — He’s pretty dope right now and picking up pace. He reminds me of The Weeknd. He basically makes mood music for like when you get in the car and driving at night. Chilled out music. Not heavy on production at all.

“Studio” — ScHoolboy Q — It’s about the vibes. Talking about the studio, chilling … making music. Whenever I would go to the studio, I would just play that a lot. It sets the mood.

“Goosebumps” — Travis Scott — I love the production. I think he’s the next Kanye. He’s this era’s Kanye.

“No Hearts, No Love” — Big Sean —  I love the sample that Metro Boomin used. It’s the old school fused with the new school.

“Ima Boss” — Meek Mill f. Rick Ross — That was my college-day music. It really pumps me up. That record is a burst of energy. Meek Mill was the best at that time.

“MotorSport” — Migos f. Nicki Minaj & Cardi B — I love playing this record in the car with my friends.

How has life been after “Panda?”

I don’t need a 9-5 job like how I was doing before. I won’t say it’s more different than the life I was living before because it wasn’t like I wasn’t making money off of music everyday anyway. I don’t need to work for anyone now. I’m my own boss. Because of my deal [with Stellar Songs], it’s made me financially stable.

Speaking with us last year, you revealed that you had some issues getting into the States. Is that still an issue for you?

No, not anymore. But it was a long time before they granted me the visa to enter the U.S. Apparently, my name came up as red flag in their systems, and they had to do a full background check. They had to do these certain types of security checks on me to see if I was the real deal. Khan is a common name for terrorists, so that’s what it was. They had to do everything and search my background and what I do for a living. In the petition, they had a thick booklet with everything about “Panda” and proof that I was a producer so I can come to the U.S. and work.

How’d going through all of that make you feel?

I was expecting it because I knew with Donald Trump being president and his immigration laws … The only problem is that it clashed with many of my events, like the Grammys and the BET Awards in 2016. I couldn’t attend them and I couldn’t do much about it.

I remember when you called out Future, Kanye West and Mike Dean in an interview and then later apologized for it.

What was your whole beef with that situation?

You know what it was? I was having an off-topic conversation with a journalist [about it], which was the worst thing anyway. But everything is okay now. I did apologize for it. I knew I should have not said that because I knew that it would come back, haunting me in one form or another. I don’t know how it works. I don’t know what to say. But now, I’ve been in the industry for nearly two years, I’ve matured quite a bit. I know who to speak to and what not to say.

With all that in the past, do you expect to work with Kanye in the future?

Definitely. He is one of my biggest inspirations since the days he was producing for himself and JAY-Z. So I really look up to him and his production, especially his album 808s and Heartbreak. That was really light years ahead of anything that was coming out during that period.

I agree. Most people love My Beautiful Dark Twisted Fantasy, but 808s is definitely one of my all-time favorite Kanye West projects because it was so different for the time.

So, different! Now all the artists want to do something on that type of level. He was really light years ahead of any artists with that album.

The big question I think everyone wants to know at this point is what are you working on now?

I’ve got so many things right now! Blac Youngsta just got signed to Epic Records, and his album is about to be released very soon. I got an official placement on that with Young Thug. Last year, I was in the studio with ScHoolboy Q. On my second visit [to the States], I came straight off the airplane [and] one of my friends said Q wants to see you, so I went straight to Interscope. I was told he was using one of my beats, but we’ll see. Also, with APG, I’ve sent in beats for Kevin [Gates]. He just got released from prison. They really like my production and they took some of my beats for Kevin. I’ve been sending production to Sickamore and Travis Scott’s A&R for his upcoming Astroworld album.

How recently did you get beats to Kevin?

It was just a couple of days ago. I sent a bunch of beats, like 10, and his manager picked about two beats. I obviously have yet to hear back about what’s going to happen, but it looks promising. They’re really loving the production. Drake as well. It’s Drake season, you know? He normally drops albums around this time of the year. I’m in contact with Oliver [El-Khatib] right now and we’re speaking, so he’s taken beats off me. It’s whatever hits. With Drake, it’s like you will only hear it on the album, that’s when you find out he used your production. He is the biggest right now in the industry.

I think the way Drake’s album-making process is unique, and I hear that from a lot of producers. He doesn’t want any leaks coming out.

Yes! Once the album is out that’s when you’ll know if you have placement with it. I’m working with a lot of people, but off the top of my head, those are the main ones. Now, I’m just waiting.