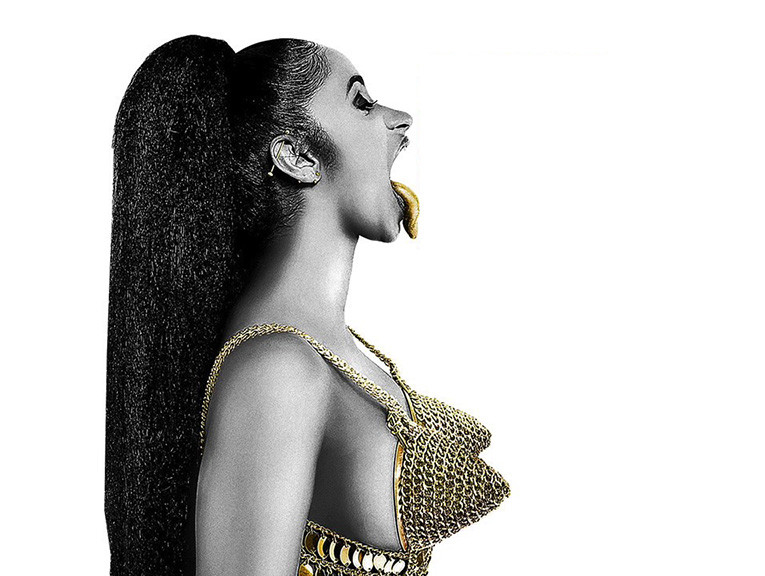 This week in Hip Hop, Cardi B had some huge wins, including her single “Bodak Yellow” charting on Billboard’s Hot 100. Also, the Hip Hop community reacted to the violence that erupted in Charlottesville, Virginia over the removal of Confederate monuments, and we learned why a Russian rap battle racked millions of views in three days.

Cardi B’s performance at MoMA PS1 in Queens, New York this week fueled rumors of a rivalry with Nicki Minaj when she called out an unnamed “bitch” out for being fake.

“You know this bitch. She never fucking liked me,” Cardi said on stage. “And all of a sudden she wants to be friends with me. No, bitch. I still don’t like you, bitch.”

Even though she never said a name, most felt it was safe to assume she was talking about Nicki. That was until Cardi tweeted lyrics to The Pinkprint song “Win Again,” which was followed with a tweet filled with praise from Nicki herself.

I see no lies when Bardi quotes Barbie ??‍♀️?? #WinAgain ~ all dat reaching you gon fuk around & pull a muscle…#BarbieTingz https://t.co/tHJmfhjOap

It wouldn’t be a shock that some in the industry who didn’t care for Cardi before would want to be cool with her now. She does have the hottest song out right now with “Bodak Yellow” and even uprooted Nicki’s previous 3-year record for the highest-charting female rapper.

Read more about Cardi B and Nicki Minaj non-beef here.

It’s been a crazy eight months in America and this week it got even crazier when a Unite The Right rally attended by KKK members, neo-Nazis and white supremacists ended in the murder of 32-year-old Heather Heyers when a car drove into a crowd of counter-protesters.

When addressing the tragic incident, President Trump blamed “both sides” for the violence, which provoked public outrage. He later double-downed and called out the “alt-left” in a different press conference.

Hip Hop reacted to the Charlottesville tragedy with condemnation for the group who held the rally as well as Trump’s response. Future even canceled two of his shows in Virginia out of respect and for safety reasons.

Out of respect for the tragic events I felt it wasn't rite to perform at this time..please understand my heart mean well VA #FutureHendrix

The always outspoke T.I. called Trump a coward when TMZ asked for his take on the President’s remarks regarding Charlottesville.

“Cowards throw rocks and hide their head,” Tip said. “So earlier they apply pressure and made him denounce his white supremacist homeboys, his neo-Nazi partners, and after bipartisan pressure, he denounced them. But, I’m sure there was a phone call from a David Duke, ‘What the fuck you think you’re doing? This is not what we elected you for.’ Then he had to come back and reverse.”

Questlove, El-P, Talib Kweli, Dam Funk and Killer Mike — who launched an anti-confederacy merch line — were among those who expressed their disdain for what happened at the rally.

A Russian battle rap between Oxxxymiron and ST from VersusBattleRU went viral this week. The battle racked up 15 million views (over 17 million as of August 20) in just three days.

HipHopDX’s Managing Editor and Editor-in-Chief for DX’s sister site Battle Rap, Chris Mitchell, had a chance to talk with Oxxxymiron, who explained why he thinks the battle went viral.

“Both my opponent and I are well-known within the urban scene and the mainstream media,” he said. “We also represent two opposing trends within Russian Hip Hop: ST is the rapper with soul, the people’s champion with a strong adherence to traditional Russian moral codes and a very basic flow. I represent the technical aspect, the Western approach to battles: the multis, the schemes, but also the position of the subversive outsider, the joker.”

Trae Tha Truth spoke to HipHopDX about his legacy in Houston and how he felt during his first Trae Day event, which just hit its 10th anniversary July. Drake has a similar concept that runs in the city called Houston Appreciation Weekend and the ABN leader shared his thoughts on Drake throwing his own event in Trae’s hometown, despite Drizzy’s Canadian roots.

“It’s always good when seeds are planted and others are taking it and elevating it as well,” he says. “I don’t think nobody can be mad at somebody, moving at a direction that you move and try to do something better [for] the city, the community, and those in need. I commend a lot of artists across [the nation]. Not just Drake. You got Chance The Rapper doing it. T.I. been doing it. They go out and [do] what they feel is right within the community.”

DX’s Editor-at-Large, Shirley Ju, spoke with EDM producer Doctor P at the HARD Summer Festival about his relationship to Hip Hop. When asked if he was excited about Eminem’s forthcoming album, he unapologetically said he is not.

“I don’t really follow Eminem anymore,” Doctor P explained. “I’ve gotten quite bored of him. I feel like he was really angry when he was in his early 20s and all his music was insanely angry. But nowadays he’s like middle-aged and not angry anymore. He’s faking the anger now — so the music doesn’t have quite the same passion for me anymore that it did.”