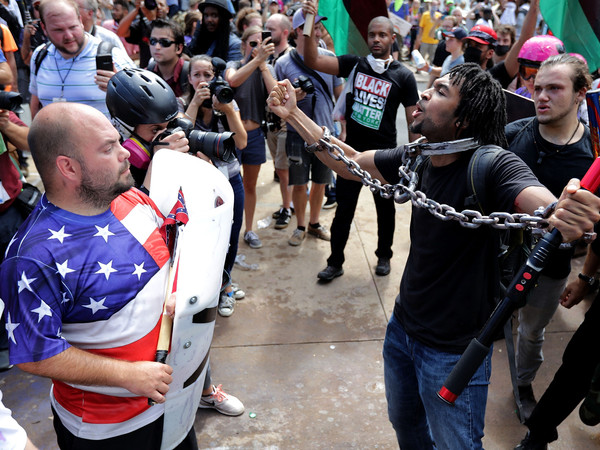 Charlottesville, Virginia – This past weekend, a group of white nationalists, which included KKK members, Neo-nazis, and white supremacists, descended upon Charlottesville, Virginia. The reason? To take part in a “Unite The Right” march, spurred by the removal of local Confederate monuments, primarily the Robert E. Lee Statue in Emancipation Park.

It all began on Friday (August 11) evening when 100 participants marched on the University of Virginia campus, dropping pro-Nazi rhetoric and slogans such as “White Lives Matter” and “You will not replace us.” A brawl broke out with counter-protesters before police eventually dispersed the group.

One day when blacks pull outta this evil system these men will be the New Niggers. Poor, white, standard education will not mean a thing. They will fill the masters prisons and suffer a drug epidemic (like now) becuz the country needs money for war. That time will come and then they will see. They will see race is a myth and class war demands a victim and it will be them. The poor and white, the worker and least of them. That day all the people u refused to ally with will rejoice in knowing u suffer like u allowed others too. I pray finally u see that ALL along you are slaves too! #ReadSomeChomskyNShit #TheStateRulesUsAll

On Saturday (August 12), things took a deadly turn. Following clashes between white nationalists and counter-protesters, 20-year-old James Fields allegedly drove his silver Dodge Challenger into a crowd of counter-protesters, injuring 19 and killing 32-year-old Heather Heyer. Fields was charged with second-degree murder following the incident, according to The Guardian.

Many in the Hip Hop world took to social media to condemn the rally and the vile movement it represents. Check out some of the response below.

We have nazi sympathizers and white nationalists in the White House. Condemn them too. They should not be receiving taxpayer money.

Alt-right, kkk, neo-nazi, white supremacist, trump supporters, bigots, racists: Fuck each and every one of you forever and ever and ever

Y'all can hate and wanna push them back into the dark but I wanna thank them for being honest. America is still the same place as 53 yrs ago and any black politician who tells you to not be fire arms trained and owners is a paid agent of the state that has always allowed these men to murder the innocent. Stay ready. Fish, Farm, Hunt, Shoot. ÷ #Do4Self

Today as I saw what was going on in Charlottesville,Va., I couldn't help but feel sad, angry, and like "what is going on in America?" I had just landed from London and was thinking how good it was to be home. But then I started to think it's tough when people in your home don't want to accept you and spew out hatred and negative energy towards you and people who look like you and other people who don't look like them. I heard a pundit on the news say, "this isn't America!" BUT IT IS! This has been America since it began looking down on others (Native Americans, Black people, Latino People, Jewish People). This has always been apart of the American DNA. For sure there are other aspects to America that are beautiful, positive and the reason why I felt good when I touched down on the American soil. However, these ugly parts need to be addressed. Yes I felt like snapping today myself for a second but then I thought about my purpose and who I'm here to serve and that's GOD and The people! The movement needs GOD and Spirituality especially looking in the face of evil. GOD will allow us to respond on A GODLY Level with a Higher vibration. That doesn't mean we won't defend ourselves but I do believe that doing the work is our greatest defense. We got work to do in our communities, our homes, supporting our businesses that are for the good of people and electing local and state politicians who share in this positive vision and are down for what we believe in. And if we can figure out the best way to express Love to other human beings, hate won't have a chance! GOD Bless. Love #charlottesville