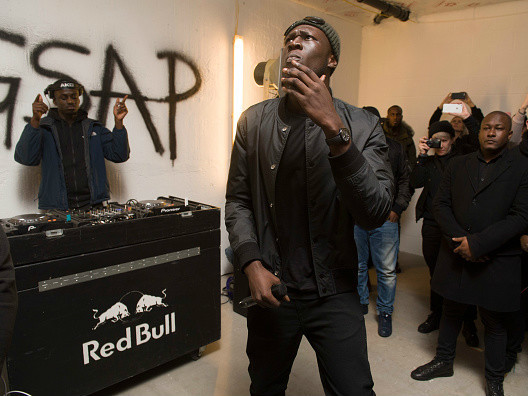 Stormzy Frustrated Grime Often Pushed Aside In The U.K.

London, England – British grime MC Stormzy graces the cover of The FADER’s inaugural Diaspora issue this month and opens up about being raised by a single immigrant mother, his recent experience with police discrimination in his own home, and how he is attempting to infiltrate the British music scene to empower the next generation of young black artists.

The 23-year-old London-based rapper just released his record-breaking debut album Gang Signs & Prayer, which recently became the #1 album in the U.K., but he still feels there’s a long way to go and expressed his frustration over not getting radio play.

“I’ve never understood this whole thing of there being this elite force in British music, but on the side is grime and rap,” he told FADER. “There’s at least five or six artists in that elite of American music. Beyoncé and Taylor Swift, Kanye West and Jay Z will be there. In this country, it’s not like that. I just question shit. I ask, Why can’t I get played on that radio station? ‘Oh, they can only play it in the evening.’ But there’s a clean version, why can’t they do daytime? They might say something about the tempo of the song, or the feel of the song. So when I’m getting in the charts, it’s [so I can] break all the walls down, and say, ‘OK, what are you gonna say now? Why can’t you play me?’”

Stormzy has famously spoken out before when The BRIT Awards (Britain’s equivalent to The Grammy Awards) failed to nominate any artists of color in 2016, which he called “embarrassing.” It prompted a meeting with BRIT’s chairman Ged Doherty, who consequently employed 700 new judges to vote for the 2017 event. It’s clear he’s up for any challenges that are thrown his way, whatever they may be.

“A lot of places, I may be one of the few minorities in the building, or on the panel, or on the stage,” he said. “I’m gonna be facing a lot more of these situations. In this country, there are not enough black actors or musicians. So when someone gets there, you’ve got to be the voice that calls out the bullshit.”

Revisit one of his latest videos “Big For Your Boots” above and check out The FADER’s cover story here.