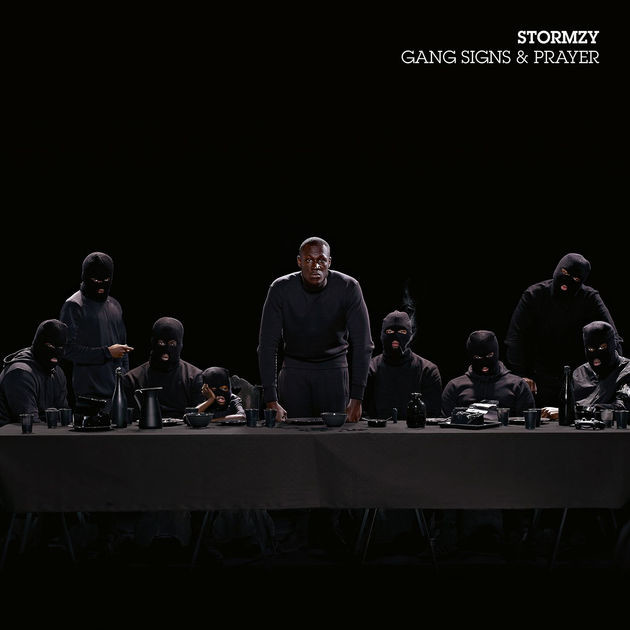 Stormzy’s initial mixtape moves and early successes at the UK’s MOBOs, a Kanye-endorsed grime takeover at the 2015 Brit Awards, and subsequent raucous singles “Know Me From” and “Shut Up” have all helped boost his stock in the game. But it was his performance with Ed Sheeran at this year’s Brit Awards, and a major co-sign from Adele, that have elevated the London-based rapper to a more global mainstream level lately. Indeed, his profile is now such that when cops busted down his door last month because – get this – they thought he was breaking into his own apartment. The life of a black man.

All of which places his debut studio LP Gang Signs & Prayer under additional scrutiny. Despite his newly-enhanced rep, the South LDN spitter proves that making that transition from mixtape MC to fully-fledged album artist can still be a tricky scenario.

It’s worth remembering that the long rich tradition of MCs spitting frenetic, multisyllabic rhymes at breakneck speed has been a staple part of black British music for some three decades. From UK Hip Hop’s initial formulations (such as the early breakbeat-led Britcore style pioneered by Silver Bullet, Hardnoise and Gunshot) to the 90s ragga-rap of artists such as General Levy (who once signed to Tim Westwood’s Justice label) to grime’s first creative bursts (think Dizzee Rascal and Wiley), it’s an approach that’s firmly etched into the UK’s cross-pollinated genres.

From UK Hip Hop’s initial formulations (such as the early breakbeat-led Britcore style pioneered by Silver Bullet, Hardnoise and Gunshot) to the 90s ragga-rap of artists such as General Levy (who once signed to Tim Westwood’s Justice label) to grime’s first creative bursts (think Dizzee Rascal and Wiley), it’s an approach that’s firmly etched into the UK’s cross-pollinated genres.

Stormzy’s rapping is very much in this tradition, and it’s in this zone where the new LP excels. His flow may not quite have the technical finesse and agility of certain other MCs in this space (see further: the mind-bending deliveries on Godfather, the recent album from aforementioned elder statesman Wiley.) But tracks like “Cold” and “Bad Boys” (which features Ghetts and J Hus) display suitably jumpy, hair-trigger street stories direct from the frontline, packed tightly into pulsating rhythms which set the album’s rapid tempo early on.

The catchphrase-loaded current single “Big For Your Boots” is a brazen distillation of humor, wit and barbed threats. At one point, we find a crowbar-wielding Stormzy “running through the party, bottle of Bacardi”, before later hopping on a flight to Qatar, contemplating learning the guitar. Other scenic highlights: “Mr Skeng” and “Return of the Rucksack”, which unfurl over stark, gladiatorial backdrops that are every bit as ominous as those imposing London council estate tower blocks that birthed the music. Our pumped-up protagonist observes how he’s “been on my steez since 2003”, threatening to “put MCs on deep freeze”, and reflects on how his early days of riding BMXs have given way to meetings with his accountant.

Things become more uneven when the tempo slows down, and gospel and R&B elements are introduced to the mix. When it works, it yields solid results. Tracks such as “100 Bags”, a heartfelt dedication to his mother, and “Don’t Cry for Me”, a salute to departed friends which features Raleigh Ritchie (a.k.a. Grey Worm from Game of Thrones), step back from the straightforward grime action and lend a more personal, introspective feel to proceedings. However, the syrupy R&B slow jam “Cigarettes & Cush”, with Kehlani, is an awkward and misplaced overture towards that all-important US market. “21 Gun Salute” and the faith-focused “Blinded By Your Grace, Pt. 2” (religion and redemption are recurring themes throughout the album) provide added context to the earlier hardscrabble road raps but sonically they detract from the album’s overall musical coherence. Though this pace switch allows the listener something of a breather and lets Stormzy’s more reflective side to shine, it disrupts the album’s intoxicating initial energy.

The tearjerker “Lay Me Bare”, in which Stormzy sets out to “shoot my pain and slay my fear,” closes out the album, offering painfully vivid perspectives on fallen friends and family relationships. It’s a suitably moving finale and one that helps off-set some of the album’s earlier unnecessary missteps. So while it’s not perfect, Gang Signs & Prayer is still a fairly absorbing consolidation of Stormzy’s position within the higher reaches of today’s grime movement.