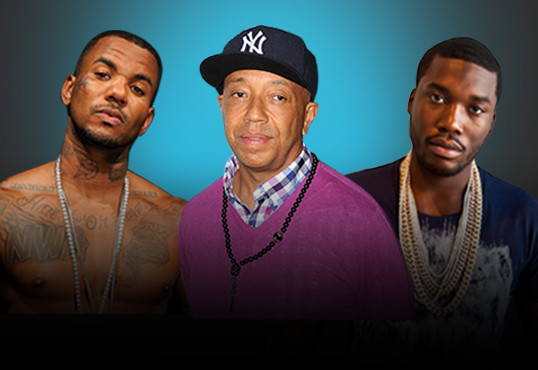 In an exclusive conversation with HipHopDX, media mogul and philanthropist Russell Simmons says that he spoke with both Meek Mill and Game directly about their beef and that the two have agreed to take their conflict off of the Internet. According to Simmons, the conversations took place yesterday and today and both artists have agreed to meet with each other in person to resolve the issues.

“[Meek Mill and Game] haven’t agreed to agree on everything,” Simmons tells DX. “They’ve just agreed to stop public beef and they agreed to have a meeting.”

There has been growing concern that the conflict between the two rap stars from adjacent coasts may spill into violence if it’s not quelled quickly. Meek Mill’s right-hand man, Omelly appeared to threaten gunplay In a since-deleted Instagram post this week, leaving many worried that this rap beef could spiral into carnage.

But despite Simmons’ assertion that Game was willing to keep the beef out of the public eye, Game’s manager, Wack 100 told TMZ today that the truce was not agreed upon. “He must have discussed this in yoga classes with Meek,” Wack says in the article.

In response to Wack’s statement to TMZ, Simmons reiterated to DX that he spoke with Game directly yesterday and today and that he also spoke with Wack 100 today on the phone. He says he’s “just trying to save people.”

“It’s a volatile situation,” Simmons continues. “I guess everyone has a [reputation] to protect. I just want to save their lives.”

A resolution agreement today of all days would prove to be especially helpful, seeing that Game’s 1992 Block Wars Tour is scheduled to hit Reading, PA later this evening. Roughly a couple of hours from Meek Mill’s hometown of Philly.

Simmons has used back channels to broker a number of slippery conflicts over the years.

“Usually it’s not one of [the artists embroiled in turmoil] that gets killed,” he says. “It’s one of their friends. Both of them agree that all of it is worthless. They both agreed that it’s not gonna lead nowhere good. They’d like to put it behind them. Neither one of them would like to put it behind them before the other, but when they both agreed through me, it made it a little easier. I’ve done this 100 times. I’ve done this so many times behind the scenes without social media years ago, and even more recently behind the scenes.”

Yesterday, September 21, Game told TMZ that he’s having reservations about engaging in conflict with another African-American while another unarmed black male by the name of Terence Crutcher was gunned down by police in Tulsa, Oklahoma.

“I find it a little difficult to be beefing with another African American artist,” Game admitted. “Cause on one accord, it’s like I should be on this Black Lives Matter push and this cops killing African Americans thing. And then on the other side I got this beef with Meek going. So, it’s kinda like I’m torn. Makes me look bipolar, man.”

This is a developing story that HipHopDX will ensure keep you updated on. Watch this space.