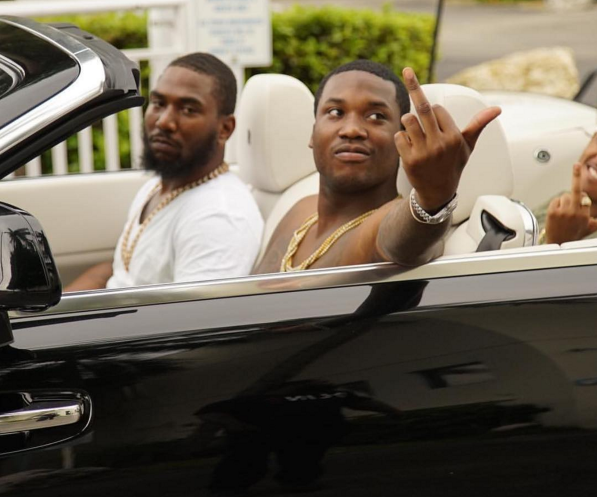 Late yesterday (September 19), Meek Mill’s right-hand man and kinfolk Omelly did the complete opposite of what Nipsey Hussle, Wendy Williams and countless spectators want to see from this current feud between Game and the ever busy MMG star. (Which keeps getting hotter with every new diss record.)

Although Omelly had taken part in the lynching that was the “OOOUUU” freestyle, where he gave Game a verbal beatdown alongside Meek, Beanie Sigel and Takbar, he let the street side of his South Philly roots get the best of him and posted a photo of presumably him holding a chopper in the street, with a few choice words for extra garnishment.

“SWING ON PUNCH ON CUZ I KNOCK A CHUNK OUT YA FACE & I STAND ON THAT,” he captioned with several hashtags. A still-standing post employed the same ethos as he wrote, “I DONT PLAY ABOUT MY FAMILY IM ALWAYS READY 4 WHATEVER” as added, #OSAMATWINLIMMAS???? #DC #OWNBREED #PHILLY #PHILLY #RIPLILSNUPE #RIPLO?”

After deleting the flick of the uzi, Omelly got back on par for the course resorted back to the current modus operandi of IG shenanigans by uploading a video featuring a male stripper with a photoshopped much of his West Coast rival.

It’s a been a see-saw battle of interest for fans, who have since seemed to favor The Game in wax after he countered the aforementioned diss record with his own “OOOUUU” freestyle turned “Pest Control (Meeky Mouse Diss).”

Omelly seemingly responded to his snap judgment for the incriminating photo and has since returned “back to the streets.”