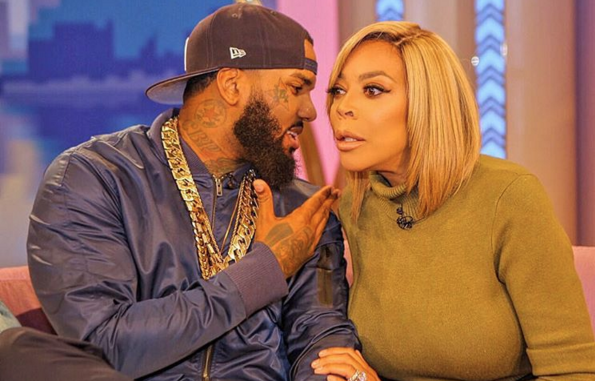 New York City, NY – Even with the frenzied press he’s been getting regarding his “beef” with Meek Mill, The Game had to know that his scheduled appearance on The Wendy Williams Show this morning would take things to a completely new level that even A$AP Ferg couldn’t get jiggy with.

A couple weeks ago, the West Coast rider released a song titled “The Sauce,” which was most memorable for its controversial lyrics where he spit, “I used to fuck bitches that Usher Raymond passed off/Then I fucked three Kardashians, hold that thought.”

Listeners immediately pegged Kim Kardashian to be amongst the unholy trinity — and they were right, as it immediately became public knowledge that Kanye West gave his “blessing” before the record saw the light of day.

Fast forward to the present day in New York City and Williams put the entire female Kardashian clan on the monitor and had Game point them out like a police line-up.

When Khloe Kardashian’s name was brought up and Williams threatened to “show some receipts,” Game let off a faint sigh before stammering, “Sometimes it gets late at night … and people … I don’t know.”

But when Kourtney, both Jenner girls and Kardashian matriarch, Kris were eliminated from contention, Game offered up the rebuttal, “Chyna ain’t married yet [to Rob Kardashian].”

For the record, he’s referring to Blac Chyna, as in his frequent collaborator Tyga’s baby mom and the next one to add a baby into the Kardashian household.

“I’m day-by-day with it,” he admitted before stating “he was violated.”

He also added that he and Meek Mill haven’t had their fight “yet.” The saga continues. Also, 1992 pre-orders are available on iTunes. (That’s what this is all about, right?)

On a more positive note, Williams addressed the vague rumors that he and 50 Cent officially buried the hatchet at a Los Angeles strip club they both occupied last month.

“We’re in the strip in L.A. and I just stepped to him and we talked for about 15 minutes and kind of hashed [it] out and left on good terms,” he said about the Ace of Diamonds encounter.

He also admitted that he would act on 50’s Power if asked and he thinks it’s a regular viewer.

Watch Game’s full Wendy Williams interview down below. Click here to listen to “The Sauce” in full.