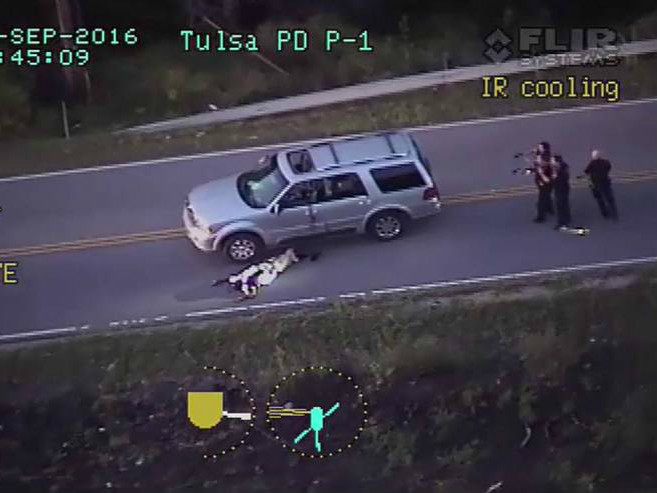 Hip Hop mourns another death at the hands of police after Terence Crutcher was shot and killed in Tulsa, Oklahoma Friday (September 16), according to the New York Times.

Police responded to reports that an abandoned car was blocking a road when they confronted Crutcher. Other reports say that the officers came upon the stalled car while responding to another call.

Authorities claim that the 40-year-old man was not listening to orders when interacting with the police. A second police car arrived on the scene and the officers surrounded Crutcher before tazing him. Moments later, Officer Betty Shelby reportedly fired the lone shot that killed Crutcher.

Two videos show the shooting with Crutcher’s hands in the air. One video is from the dash camera of one of the police cars on the scene. The other is police helicopter footage from above the scene. In both videos, the moments of the shooting are obstructed as the officers surround Crutcher.

Shelby’s lawyer, Scott Wood, said his client believed Crutcher had a weapon on him and reiterated that the man acted erratically during the incident. Crutcher reportedly reached into the car window before he was shot. Shelby, who has been on the force since 2011, is currently on paid administrative leave.

Tulsa Police Chief Chuck Jordan addressed the media, admitting that Crutcher was found to be unarmed. He continued by saying that the second squad car arrived after Shelby called for backup because Crutcher was not complying.

Crutcher’s family, which includes a twin sister, expresses sadness at the lost of their loved one to BBC. They ask for people to help them seek justice for the case, but to remain peaceful while protesting.

This comes months after Alton Sterling and Philando Castile were shot and killed by police within days of each other. The events, and shootings directed towards police, caused racial tensions to escalate in the United States.

Questlove addressed the incident in context with the current protest of the National Anthem by NFL players. San Francisco quarterback Colin Kaepernick initiated the protest.

“I am not going to stand up to show pride in a flag for a country that oppresses black people and people of color,” he said as his reasoning for not standing during the “Star Spangled Banner.” “To me, this is bigger than football and it would be selfish on my part to look the other way. There are bodies in the street and people getting paid leave and getting away with murder.”

so all you you "mad at national anthem kneelers" w verification checks—-yall got another 2 cents for #TerenceCruthcher or nah?

View dozens of other reactions from the Hip Hop community to the death fo Terence Crutcher below.

I JUST SEEN A TERRORIST SURVIVE A SHOOTOUT WITH THE POLICE AFTER BLOWING SOME SHIT UP AND LATER ON THAT DAY A BLACK MAN SHOT DOWN FOR NO REASON AT ALL! "I NEVER BELIEVED IN AMERICA" THE LAND WHERE THEY WILL TAKE YA HOUSE AND PUT YOUR KIDS OUT ON THE STREETS FOR SOME OWED TAX MONEY….. WHERE THEY GIVING OUT 30 YEARS SENTENCES FOR NON VIOLENT CRIMES TO MOSTLY BLACK OFFENDERS " I DONT THINK I WILL EVER VOTE,THAT STUFF NEVER FELT LIKE IT WAS FOR ME OR MY PEOPLE FROM WHERE THEY GIVE POOR PEOPLE MILLION DOLLAR BAILS AND SAY INNOCENT UNTIL PROVEN GUILTY!!! FROM WHERE THEY SAY FREEDOM OF SPEECH BUT WILL GIVE YOU A 100 YEARS ABOUT A PHONE CONVERSATION WHERE THE WORLD EQUAL DOSENT EXSIST! THEY JUST TOOK MY FRIEND FREEDOM FOR SMOKING WEED ON PROBATION……. AND THIS COP THAT KILLED THIS MAN/FATHER GOING HOME TO BED TONIGHT?????

I ain't pledging to SHIT!!!! America continues to remind US this ain't OUR country… It's Theirs & they ain't sharing it!!!!! Therefore….. It's #USorELSE #RIPTerenceCrutcher??

Why does this keep happening?? It's like they want to show you what they are doing because now they don't give a fuck if it's on video.. This shit is purposely being done smfh all these hashtags and IG post don't mean shit and doesn't change shit!

Now let all the racists come forth and say that racism doesn't exist. Those who will make a reason for why this man was shot and killed. Fuck you! Can you not see why we shout BLACK LIVES MATTER! Can you not see why Colin Kaepernick says fuck your national anthem?! A bomber, literally a terrorists, shoots it out with the cops and is safely detained yet this unarmed black man is shot down like so many others. If you don't see the problem, you are the problem. #prayformypeople

And all of you "good policemen/women" are being too quiet… #TerenceCrutcher was murdered!! Do you not agree?? Why so silent?

To all law enforcement around the country, YOUR SILENCE IS SICKENING!!! #TerenceCrutcher was MURDERED!!

We will not be silent.

Who do we regard as criminal? The white woman? Or the black man? Constructions of criminality from long ago are at work. #TerenceCrutcher

RIP #TerenceCrutcher How tf the officer in the heli gon say "he looks like a bad dude" How TF CAN YOU TELL HE LOOKS BAD? CAUSE HE'S BLACK??!

We supposed to be free #TerenceCrutcher#numb

How do you go from needing help for your broken down car, to being shot dead? #TerenceCrutcher #TaseTheThing #ThatLooksLikeABadGuy

#TerenceCruthcher didn't deserve to be taken away from his family. These horrible acts of social injustice require immediate action

#TerenceCrutcher My heart HURTS for this man and his family. HURTS. #fb

So tired of seeing these videos. When do the people who pay taxes get protection? #TerenceCrutcher pic.twitter.com/MkVH2F7js5