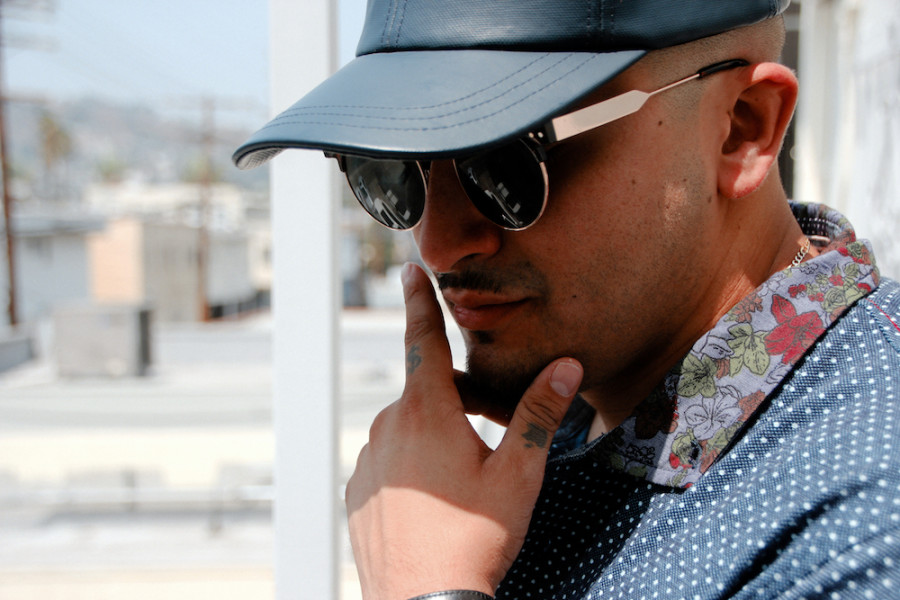 Los Angeles – The unsung heroes of the music industry, engineers get a unique perspective on the music-making process while meeting the frequent demanding tasks of artists. Taking unfinished music and giving it that extra polish is equal parts art and science. One individual who understands that totally is Jamie “Jimmy Cash” Lepr who’s handled mixing and engineering duties for Travis Scott, Riff Raff, Far East Movement and a host of others.

But through his years tuning up hit records, he’s been working on his own music as CA$HPASSION. With ambitions of making the transition to a notable rapper, his upcoming CA$HPASSION EP has some serious backing. This includes production from TM88, WondaGurl and P-Lo alongside a feature spot from DX Live alumni Tre Capital.

Hanging out with DX over pizza (his recent single is named “Gucci Pizza”) on Los Angeles streetwear capital Fairfax, CA$HPASSION discusses his journey, his upcoming project, why he has a particular edge in music production and why Kanye West’s My Beautiful Dark Twisted Fantasy is one of his favorite engineered albums.

CA$HPASSION Really Started From The Bottom

CA$HPASSION: I’ve been rapping since I was 14. I was in high school doing homecoming dances. I’m from up north, around an hour above the Bay Area. I was on a little tour with some people like Baby Bash. I did a six-date lowrider tour. I was doing that and close to 18, I realized I needed money to do this shit. I had to find a backup plan. Then I found The Los Angeles Recording School on a website and I started looking into it. I hit a little road bump when I was 18 and got in trouble with the law. I got caught with weed during my last semester at school. I was wildin’ out. I would be at homecoming dances with little sacks. I was doing the most. I was young and dumb.

HipHopDX: How exactly does one go from being an engineer to rapping?

CA$HPASSION: All that happened, so I figured I had to get behind the scenes. I wanted to make a living out of this, but obviously, the chances of making it in rap right away was hard. I went to the school out here and did that. I was on unemployment and school. I started interning with Harvey Mason Jr. of The Underdogs production team. It was the best internship because they had like four different studios. The Stereotypes were in one room. The Far East Movement were in another. Meanwhile, Bruno Mars was in one studio before he got huge. You might see Tank in one room. At the same, in the big room, you might see Chaka Khan and Louis Farrakhan playing the violin. It was the best situation.

I went back to my hometown for a couple of months and moved back to LA to live with The Stereotypes over in Santa Monica. Started engineering for them for a couple of months. I left that and started from the bottom at Paramount Studios as a runner. Moved up and started working with everyone including Christina Milian and Travis Scott. I’ve been with Travis forever. I’ve done a lot. I did the Travis joint on Cruel Summer, I worked with Pusha T. I worked with Travis on the If You’re Reading This It’s Too Late. I also mixed “Diamond Dancing” from Drake and Future’s What A Time To Be Alive album.

DX: Those are some serious credits.

CA$HPASSION: Yeah man, I mixed and mastered both of Riff Raff’s albums. When Danity Kane tried to make their last comeback, I did that. I have a bunch of shit.

DX: What attracted you to engineering as an outlet to get where you wanted to go as a solo artist?

CA$HPASSION: It wasn’t so much that I just wanted to be a rapper, I wanted to get into music. I wanted to make a living out of it. So when I went into engineering, I didn’t necessarily think I was going to do it. At one point, I didn’t think I was going to do this. Once I started engineering, I wasn’t too sure that I wanted to do it. I was still dropping songs here and there. That was also a factor with me doing something too. A lot of people know that when you work on something so long and you get the shittiest results, it’s so degrading. I had done that with a bunch of artists coming up here and even going to high school. I had a group in high school and I use to go and pick up everybody here and there to record and they were lazy. Ever since then, even the people I work with never have as much drive as me. I’m always more excited for them.

DX: When did you decide to really step out there as a solo artist?

CA$HPASSION: It was during the Rodeo days with Travis. It must have been a fallout with a homie whose tape we dropped. He’s still my artist, I’m still pushing him and I don’t want to talk down to him, but we had a lot of opportunities that he didn’t act on fast enough. Since I had the good look from being on Travis’ album, I thought it was time for me to go for it. I’m not getting any younger and I reached a lot of bucket list shit.

DX: What was one thing on your bucket list?

CA$HPASSION: I know this is going to sound weird, but one was to actually work with Riff Raff. He’s hilarious and cracks me up. He’s having fun. That’s the key thing with me. The whole thing about me is having fun. All of my songs are like fun first instinct. It took time for me to lead up into this point.

DX: How does that accumulate into your upcoming EP coming out Friday?

CA$HPASSION: The process is that I had some shells of beats I started myself and started reaching out to people who instantly wanted to work with me. Literally, a lot of the time, I wouldn’t even listen to the beat before recording. I would start right there. I would just load it up and freestyle. A lot of my content, it’s always the first couple of takes that I run with. I linked with WondaGurl, Sonny Digital to hear tracks and they just told me they wanted to fuck with me. I got some production from TM88 as well. I’m also working with P-Lo and Tre Capital.

DX: Artists doing the rapper/producer thing is fairly common. What advantage does being an engineer/rapper have?

CA$HPASSION: Being an engineer is like a lesson in life. You have to be patient in order to be a good engineer. Dealing with people and their schedules. You’re talking about Hollywood, rappers and all of that. You have the most ratchet situations sometimes. They don’t give two fucks about you. It’s a true story unless they’re really cool with you. At the end of the day, I’ve gotten into situations where I go to the studio, they’re drunk and high and you’re not really thinking about the engineer. That applies to anything in life and getting through them. It’s about knowing that it’s going to be a good outcome. Knowing that you have the skill set to make it cool, but you gotta control the situation. It’s very tedious.

Every vocal or sound have different EQs that you have to manage differently. It’s about fine tuning everything. Over the years, I’ve created my own templates that took a while to build, but it makes things more efficient. That’s why I can make songs so quick. I already have my shit ready. It helps on the artist side because I don’t have to wait on somebody to mix. For this project, however, I teamed up with this engineer who has worked with everyone including Rihanna. Why not add this fire to this extra fire?

DX: Every rapper has their favorite rap album of all time. What’s your favorite engineered album?

CA$HPASSION: Damn, I would say Kanye West’s My Beautiful Dark Twisted Fantasy. I learned a lot from the mixing of that through my homie Anthony Kilhoffer who did a nice size of the engineering on that project. It doesn’t matter how much shit you have, you can make it fit. He had like 500 features on every song. He had strings, guitars and every instrument and the average person would be like chill, you can’t make all of that mix sonically. If there’s a will there’s a way. It’s about figuring it out. I feel like “All Of The Lights” is one the craziest mixes ever. I was honored to work with Kilhoffer and have him teach me some shit. Apparently, I taught him some stuff he didn’t know either from the new school. That was a good moment.

DX: You already released the “Hard Earned” and “Gucci Pizza” tracks for the project. What’s next for you after the project?

CA$HPASSION: The project took over a year to make. I got a bunch of more songs. I don’t think my shit is going to get dated, but it’s about the personal feeling. I want people to hear it now, but I try to make timeless music. After this album comes out, I have videos I shot in Italy and South Korea. I got all of those coming out once the project drops. I have a track with Sonny Digital. I’ll probably have another EP come out. I’ve been talking with KOHH who just got a great look on Frank Ocean’s recent album about a project. It’ll be an American / Japanese type of feel. I’m really trying to expand a lot. I’ve been going to Korea a lot. I want to start doing the international thing. I want to expand on that. I’ve been working with Dumbfounded while mixing and mastering his stuff as well.