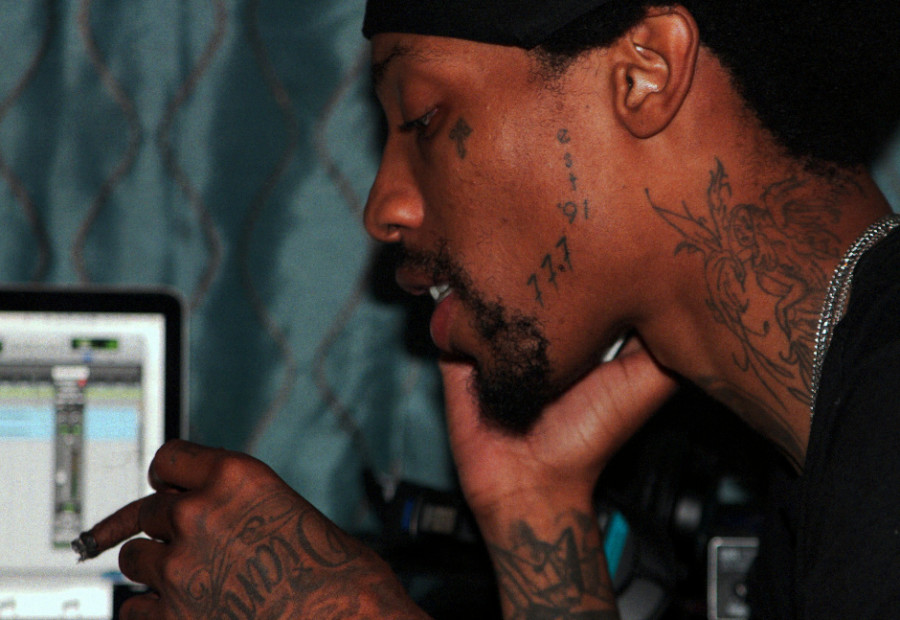 Los Angeles, CA – Making a name for himself as the producer for YC’s Future-assisted, gold-selling “Racks,” Sonny Digital has continued to evolve at his own pace.

Even the time we spent with the Atlanta-based producer proved just that. Landing at a Hollywood house after his performance at Day & Night Festival, he plays with a newly purchased microphone, flipping between melodies on a home-cooked beat. Like a pre-recording session ritual, he’s also rolling up the best herbal remedy in an empty Backwood.

This isn’t the same guy who produced 2 Chainz’s “Birthday Song” or ilovemakonnen’s breakout platinum-selling hit “Tuesday.” Nope, Sonny is reverting back to his initial reason for getting into music: to be a solo artist. Obviously, the time crafting beats for the likes of 50 Cent, Wiz Khalifa, Young Thug, 21 Savage and others has provided him the opportunity for a real shot.

More recently, he’s started dropping music and video content at a rapid pace. Just last week, he released “SRGOW.” Strangely, that was produced by Honorable C.N.O.T.E. But as Sonny tells it, working with other established producers isn’t anything new. He already has co-production credits alongside Metro Boomin, 808 Mafia and a handful of others. Why not take the same approach to his solo endeavors? It doesn’t mean he’s slacking on the production side.

HipHopDX: You’re making the transition from producer to a full-on solo artist.

Sonny Digital: It just makes sense bro. If I rap and produce on a song, I own the whole thing. So shit, I’m just having fun right now. On top of that, I really don’t like working with people and shit.

Sonny Digital: I like working with new people and shit, though.

DX: You’ve earned some serious gold and platinum plaques with some established artists.

Sonny Digital: If you notice, a lot of people I was fucking with, I was fucking with them when they were brand new and shit. We built over time. Now they’re big. That’s all that is. It’s never been anything different, it’s all the same game. You just have to choose the right people to fuck with, though.

DX: What made you want to make a big push now?

Sonny Digital: I’ve already been doing it. I just stopped because I never had the platform. Now, I have the platform. I did a whole mixtape with Que titled Forbes Atlanta a few years back. They were on other people’s beats. None of them were my beats. That kind of got overlooked. I still have songs on my MySpace page. Those are songs of me singing with instrumentals produced by my cousin. That goes to show that I’ve already been doing it. It’s not about me doing it, but when you guys choose to pay attention to me. The producing shit took off quicker and I was able to make beats quicker than I was able to make songs too. Right now, it’s come back full circle cause I can make my own beats and work at my own tempo.

DX: This is all set to lead to your project, right?

DX: We’re in the age of the streaming wars. Why SoundCloud?

Sonny Digital: They the homies. Who wouldn’t want to do something with SoundCloud? Streaming helps everyone out. It gives people a bigger platform to grow and be big as an artist without having to do as much. It’s catching all the plays for stuff niggas weren’t getting paid for. You stream enough and it counts as a sale. I feel like it’s good because you’re starting to see a lot of niggas go gold and platinum versus a couple of years ago. An artists would drop a hot-ass album that wouldn’t do nothing. Niggas might get ten times more downloads on a free mixtape than an album they have for sale.

Basically a mixtape is streaming and they’re turning that into money. Now, that’s giving niggas an incentive to make more music because they’re seeing stuff being accomplished from it. We always talk about how back in the day, music was selling hot and how many plaques people were getting because records were selling. The only reason music was selling like that was because there was only one way for someone to get music. You couldn’t download or stream. The only way was to buy it. When people started getting options, that’s when the real numbers started coming. Everybody listens to music though so we have to catch all the plays and turn that into real money. That’s where we’re at now.

Sonny Digital: I fuck with them heavy. I’ve been drinking Hennessy since I started drinking. I always wanted to do something with them, but looking back now is the perfect timing because I got a lot of stuff to talk about.

DX: This is your first official solo project. What should listeners expect?

Sonny Digital: Right now, I’m just putting out ideas. I’m adding shit every day. I have a general idea of what I’m going for. I’m trying to give people a College Dropout feel but revamped for 2016. I’m going to tell a story but make it cool, though. It’s been cool points in this shit, but there’s a lot of shit that people don’t know. Then when I do tell them outside of a song, they’ll be like oh shit. It’s going to be an album and documentary put together. If you watch it, it’s going to be like damn.

Sonny Digital: You hear that album?

Sonny Digital: Remember “Last Call?” That whole track. I’ve listened to that track for a long time — over ten years ago by now. That track really narrates what’s currently going on in my life. You know that part where he’s telling that long-ass story? That shit is so crazy how it correlates with my shit. It’s piece by piece. You remember the part where he talks about getting kick out his apartment and shit? The same exact thing happened to me bro in the midst of everything going on. If you listen to that album, it was his whole producer to artist transition. That’s basically what I’m trying to do. This is very identical to everything happening in my life down to a T. Having artists that were supposed to be signed to me sign on to major labels. This shit is crazy in how it’s unfolding. This shit is about to happen. Now, it’s time to make an album.

DX: I know you mentioned feeling more inclined to work with newer artists, but should we expect some folks you’ve collaborated with in the past on this release?

Sonny Digital: I ain’t really working with nobody bro. The only reason I say that though is that I hate waiting on people and depending on people. I might have people come in and help on what I’m already building on just so they can add on. Just for the project right now, I need to focus on what I’m trying to do. I don’t need to focus on other rappers being deeply involved with my shit. I just need them to know what’s going on. I’m still serving people as far as being a producer. I’m doing my job with that. Right now, I’m focusing on being a rapper. I see how easy it is. I don’t have to call people for beats or call people to get on my beats. I can do everything myself. Once that shit gets poppin’ and people understand what’s going on, it’s going to be a deadly combination.

DX: What do you think it’s going to take for people to take you more seriously as a solo artist?

Sonny Digital: Hennessy weren’t fucking with me on the producer shit. They were fucking with me solely on the rapper shit. It’s going to take for other people to show interest in things that are going on. Think about it, who else has Henessy fucked with historically? They never even heard a full project from me. They just know what I’m trying to do. I feel like that’s a cosign from me. I ain’t getting no co-signs from rappers.

Sonny Digital: Shit, I don’t know. I can tell you this, they do see me though. They see me. When I do bump into them, they let me know that they see me. It’s not like I need a cosign or want one. I don’t really want nothing from nobody though. I just want them to see what I’m doing. I’m just grinding like a regular artist. I’m not about to use no cheat codes or none of that shit because I want people to take me serious. I don’t want a kick stand or take no attention away from what I’m trying to do. It’s not me being selfish or me not fucking with anybody. I can’t fuck with people who’s too much bigger than me though. That’s why my whole thing is fucking with people who are coming up. The more people coming up, the more people who are on. It’s cool people coming up. On this project, I have some up-and-coming producers as well.

DX: Who should we expect you to be producing for in the future?

Sonny Digital: I just did some shit for Guwop [Gucci Mane]. I was just working with Travis $cott. Also working with Meek Mill. He got a hard one. What I heard was on. I don’t want anything to do with them records though until they come out. I don’t want niggas thinking he had anything to do with shit leaking. I got more shit in the stash, though. I have shit with Chief Keef. You know I got that “Trapped It Out” track with Lotto Savage.

DX: What’s your measure for success as a solo artist?

Sonny Digital: As an artist? That’s a great question. I don’t fucking know. I’m hungry man. I want more and I need more. I have to get more in order to keep up with what I have going on. Shit man, I don’t know there’s a level of success where I’ll feel comfortable. I’m always going to have that ambition to do more. I’m utilizing every part of my talent. That’s why I tell rappers to learn how to make beats. I tell producers to start rapping on their shit. It just makes sense. Just learn how to do it all. That’s the easiest thing. It literally all connects. They go hand-in-hand literally.