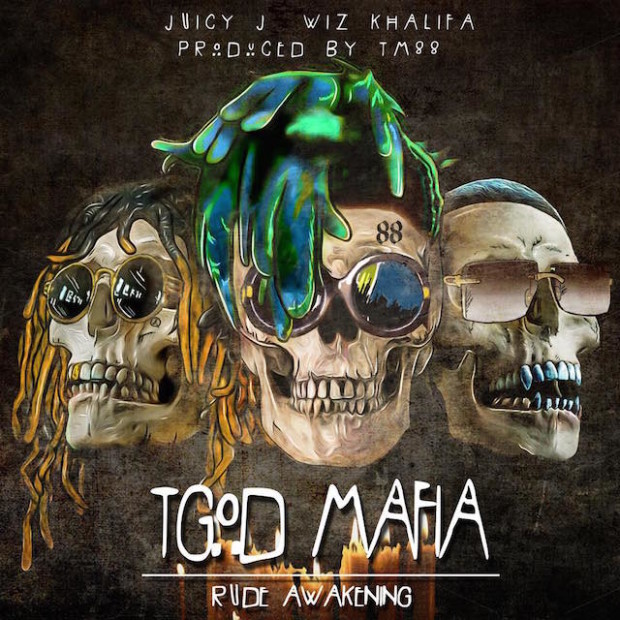 Juicy J’s post-Three 6 Mafia reinvention thanks to his Wiz Khalifa friendship couldn’t have served better for the both of them. Khalifa found an unlikely megastar in a veteran who turned his Taylor Gang collective from a pure vanity label to an entity capable of churning out hitmakers. Mr. Stay Trippy hasn’t slowed his pace since his comeback in “Bandz a Make Her Dance.” (Hi, Katy Perry.) Meanwhile, TM88 has grown to be one of the more noticeable individuals out of Atlanta-based production collective 808 Mafia who have handled beats for Future, Gucci Mane, 2 Chainz and Young Thug among others. Having all three together for Rude Awakening is the turn-up anyone familiar with the trio’s music would expect, for better or worst.

Thankfully, TM88 provides the most impactful beats of his career so far. The green dreaded giant knows exactly how to make those 808 drums knock like nobody’s business. There’s a layered texture to his melodies that makes his production more than just another trap style hybrid that’s synonymous with his home region. Hip Hop heads with expert knowledge of Three 6 Mafia will definitely hear the linage and Juicy J influence. The punctual snares and peppering of the “Yeah Hoe!” samples give it enough of a nostalgic flair missing from contemporary Southern Hip Hop. The best examples are intro “Da Power” and “Green Suicide”s warbly sonics. Make no mistake; Rude Awakening is completely his show. The bleeps-and-blips of “Itself” really allow possibly this year’s most ridiculous hook “Pussy, dope and bankrolls.”Most importantly, he lays the perfect soundtrack for Juicy and Wiz to spit rhymes about typical fodder for the two. That’s right ladies and gentlemen; clubbin’, flossin’, women, extreme drug use and everything else in-between are used as a crutch. Tracks like “Where Was You” and “Luxury Flow” become trunk rattling ecstasy, and are the result of everyone firing on all cylinders. Adding Project Pat as the sole featured guest on “Breaking News” adds a small horrorcore slant as Juicy J spits “Yo nigga got me hot / so I’mma make him / fire his ass up / make his body rot” reminiscent of his Mystic Stylez days.

Too bad Rude Awakening can’t keep up with its own whiteknuckle pace at times. “Stay the Same” is a lost moment that interrupts the project’s flow even though it’s one of the more introspective cuts. Other examples such as “She in Love” and “Bossed Up” come off as generic as the titles.” More so, Khalifa uses the album to promote his Khalifa Kush (KK) strain of weed hat had him Twitter wrangling with Kanye West earlier this year enough to get partly annoying when coupled with beyond basic rhymes. Additionally, the formula of Juicy kicking off each track with Wiz swooping in midway gets tired after the first few tracks. Khalifa may be the more technically proficient rapper than Juicy J. However, the former Triple 6 legend has mastered the ability say the most audacious bars that just ooze with personality.

Young Khalifa, Juice Man and TM88’s Rude Awakening could be considered a good time for anyone who is a fan of everything all three can offer. It’s just a damn shame those aforementioned lame tracks interrupt the party atmosphere. Regardless, the unhinged hedonistic vibe will evoke imagery of drug binges, loose women, bass filled antics and most importantly, a serious hangover. Listen responsibility.