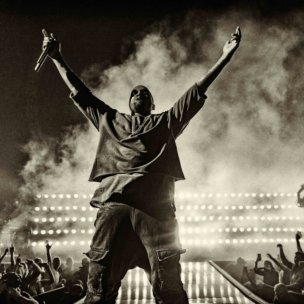 The ranting, illogical, and highly entertaining Kanye West that we all once knew and loved returned for a brief moment today to slander Wiz Khalifa. He originally took issue with the Taylor Gang general for calling him out over the title of his upcoming February 11 project WAVES (the album formerly known as SWISH). Wiz and others associate the term with Max B and tried to create conversation around the incarcerated rapper at Kanye’s expense. Then, in a bizarre turn, Kanye took issue with what he believed was Khalifa’s referencing of his wife Kim’s initials. Of course, “KK” is actually a reference to Khalifa’s personal strain of weed called “Khalifa Kush.” Needless to say, Kanye went in on the “See You Again” emcee with a passion we haven’t seen in just about forever.

But, in the process, we learned some things about Kanye’s relationships, how he feels about Amber Rose, what he doesn’t pay attention too and so much more.

Kanye West Is Out Of Touch With Weed Culture

After Wiz Khalifa made the comments regarding currently incarcerated Max B and Ye’s album name change to Waves, he said in a Twitter post “Hit this kk and become yourself.” Kanye took the creative jab a little more personal in relations to his wife’s famous initials. In reality, Khalifa was referring to his own personal brand of OG Kush appropriately named Khalifa Kush. Those who follow the Pittsburgh rapper or have enough knowledge of weed culture understands exactly what he was talking about. There’s a safe bet that Khalifa has the most celebrated strain of rapper weed available. Then again, considering Ye’s history, he’s definitely more of a drinker than a smoker.

Ye Is Paranoid About People’s Perception Of Him & Kim Kardashian

Kanye seems to still care so much about how the world views Kim. Just the mention of what looks like initials of Kim’s name causes this much consternation? Kanye went unhinged for a solid few tweets before someone told him that “kk” means “Khalifa Kush.” And even after that, he continued to call out Wiz’s music, how he got trapped by a stripper (one he loved fiercely, mind you), quoted himself on “Gold Digger,” and then literally said he owns Wiz’s kid. If that’s not below the belt, I don’t know what is. And all to uphold Kim’s honor?

For a guy so far removed from his last ex-girlfriend to be married and have a couple of kids, Kanye still finds time to needlessly bring up Amber Rose. Last year, it was the “30 showers” comment after Muva made honest comments regarding Tyga’s inappropriate relationship with youngest Kardashian, Kylie. Ye even mentions her on the Kendrick Lamar-assisted “No More Parties In LA.” Rose seems to have moved on without talking much about Ye in a negative light. Well, that was until today. And, of course, she didn’t hold back.

WAVES Is A Gospel Album?

We sincerely hope this isn’t true, but Kanye also claimed WAVES is a gospel album. This despite the fact that even Jesus couldn’t get Kanye to chill long enough not to call out Amber Rose and Wiz’s child. Does this mean, though, that what we’ve heard so far will be nowhere near what we’ll find on WAVES?

In a moment of what must have been sheer madness, Kanye tweeted that he owns the child of Wiz Khalifa. It was the jump-the-shark moment of the whole beef that happened halfway through the thing. It’s baffling how Kanye could still consider Amber Rose someone he owns after being “happily” married to Kim for years now. It’s equally frightening that he could use the I-hit-it-first logic on Wiz and Amber that Ray J and others use on him and Kim. But this isn’t about logic. This is about pure entertainment and as far as saying things that cross every line go, this one took the cake.

Kid Cudi’s break from GOOD Music happened without much drama. Both himself and Ye even refused to talk negatively about each other in interviews or on wax. In his onslaught against Khalifa, he alleged that the “Black and Yellow” rapper stole Cudi’s style. From Ye’s perspective, skinny jeans weren’t popular until himself and Mr. Rager made them fashionable. This is actually the first time the Chicago-native has mentioned Cudi in quite awhile and it seems everything is good between the two.

Yeezus Is In The Lab With Ian Connor

Just who is Ian Connor, you might be asking? Well, he’s a young Instagram fashion icon who commands over 400 thousand followers on the Gram. He also walked in Kanye’s Yeezy Season 2 Adidas campaign and is reportedly currently or the former stylist for Wiz Khalifa. Just another example how petty Yeezy got over the course of his Twitter tirade against everything Wiz.

Ye Is Not Beyond Being Petty

Between the “You wouldn’t have a child if it wasn’t for me” or “I own your child” tweet, it’s safe to say that Ye probably managed to out-petty the likes of Drake and 50 Cent. Bringing up Amber Rose for no reasonable reason was an entertaining low-blow. It might have worked, according to Yeezus, Khalifa lost around two million followers following his Twitter rant.