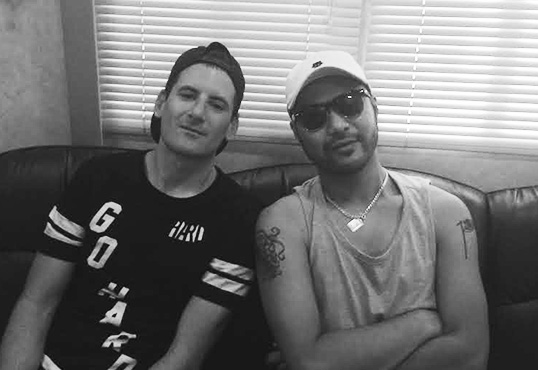 Fontana, CA – Destructo has been building the bridge between EDM and Hip Hop for nearly a decade through his HARD Summer festival. He is now partnering with Australian-born producer and DJ Wax Motif for an EP that will further blur the lines between the two genres.

The duo released “Catching Plays” today, the latest single from the project that features Pusha T and Starrah. Speaking with HipHopDX at this year’s HARD Summer festival, Wax Motif expressed excitement about linking with Starrah, who possibly has one of the top writing catalogues in the game right now.

“It’s just awesome to be the first guys in dance to jump on her, you know what I mean?” he says. “That’s really cool. She has the worldwide number one record right now. She wrote ‘Needed Me’ for Rihanna. She’s down with jumping on our record, which is amazing.”

The duo is also working with Compton rapper AD, who is excited to continue blending his own artistry with the EDM world. Wax said he and Destructo are working on bringing him and Lil Bibby together for a track and praised the By The Way rapper for his open mind and desire to expand his brand.

“He’s so open to new music, but he’s like ‘I know I’m a gangster rapper, so the way I can achieve this is through verses and collabs with you,’” he says. “So he wants to be on electronic music.”

Destructo says he is excited for the expansion of the EDM scene and is proud to be a pioneer of the culture. He explains his personal journey through the genre, starting HARD Summer and connecting with Wax.

“It’s just crazy. I never imagined it could be this big,” he says. “I got a record label, so I used to always make records and then no one buys records, so I was like, ‘I guess I’m just fucking done.’ I didn’t know what I wanted to do, so I decided I’d go back to DJing and try to sell concert tickets and started HARD, and then a couple years into it just started going to the studio more trying to make some records. Then the records started catching on and so I wanted to bring in more rap and everyone was like, ‘You got to meet Wax. If you want to do house and rap, then Wax is the dude.’ So we linked up and then a couple years later it just keeps getting bigger. I could’ve never envisioned it being this big but I’m not mad at it.”

HARD Summer featured Travis Scott, Lil Uzi Vert, Belly and Ty Dolla $ign at this year’s event and has embraced rap since day one. 2 Live Crew performed at the festival’s inaugural year in 2007.

“They didn’t go on stage until we gave them their cash,” Destructo recalls. “So I had to DJ a little bit while I was trying to find their cash at the same time.”

Nine years later, he is networking with DJ Yella, who joined MC Ren for an N.W.A semi-reunion on Ice Cube’s set this year.

“He gave me his business card!” Destructo beams. “He’s like ‘I’ll DJ any show.’ I got DJ Yella’s business card. I should frame that shit!”

Look out for Destructo and Wax Motif’s EP coming in the fall and plenty more music from them as they continue breaking barriers.

“It was bound to happen,” Wax says. “We’re just here to facilitate it.”