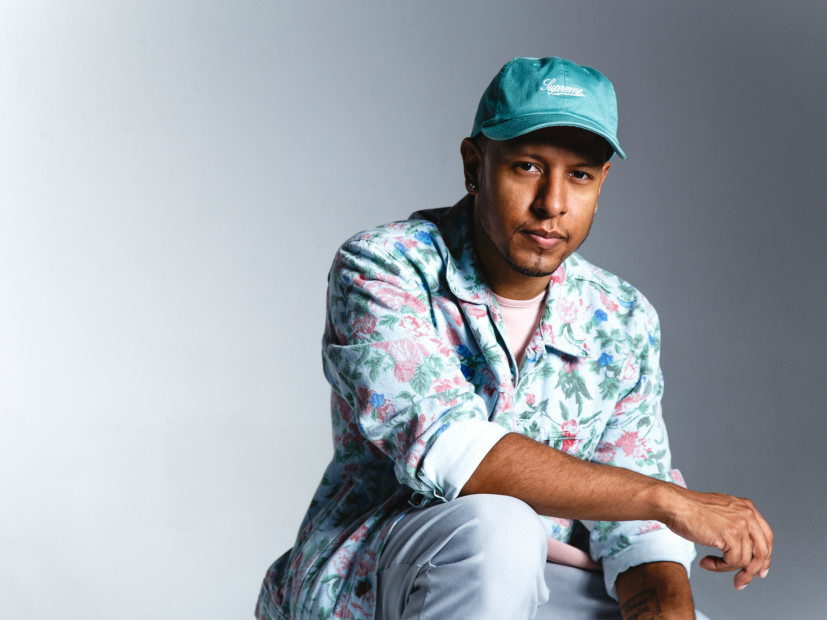 GAWVI knew he wanted to be a producer at the age of 13. Growing up in the Bronx and South Florida, he had many cultural influences that made him the artist he is today. After a stint as Reach Records’ in-house producer, GAWVI announced in January that he signed with the Atlanta-based label to become a solo artist.

“It was very exciting for me,” he says in an exclusive interview with HipHopDX. “I was able to have a lot more freedom to experiment and do a lot more different things that I’ve been wanting to do.”

One of his earliest inspirations was will.i.am, who GAWVI says he appreciates for his ability to balance production and vocals and also blend different genres.

“I really come up from looking up to will.i.am from back in the Hip Hop days when he started out bridging the gap with the Black Eyed Peas,” he says. “He produced everything for Black Eyed Peas and just the different styles that he can do from boom bap, to straight pop music, electro, funk music with the album Elephunk.”

GAWVI used to rap back in the day, but laughs at the idea of getting back in the booth anytime soon. He has mastered his craft behind the boards from an internship with Pharrell. Even though he mostly served as an errand boy, he soaked in everything he could while he was on the job.

“Pharrell is just an iconic legendary guy,” he says. “While I was interning there, he’s working on Shakira’s album, Fat Joe’s album, and then N.E.R.D.’s album all at the same time. I’m just blown away how a man can move from one studio to the next studio, and just being able to concentrate all that. It was a crazy experience.”

Later on in his journey, GAWVI became in-house producer with Reach Records and crafted Trip Lee‘s RISE album as well as beats for Lecrae’s Anomaly. Back in April, HipHopDX spoke with Lecrae about the diversity of his label’s roster with the addition of GAWVI as a solo artist.

“Every artist is so unique and Reach has to kinda play the background a little bit and say, man, we wanna just serve you all,” he said. “We don’t wanna have an agenda that is superseding your heartbeat and what you’re about. We wanna support you. So obviously, we wanna change the way people see the world and support these artists. Some artists wanna be very explicit about what they believe. Some artists wanna just make music obviously not anything that contrasts or contradicts what they believe, but it may not be as explicit in terms of that. So what Reach wants to is just say hey y’all, we’re here to serve and facilitate you guys making the best music you can possibly make. Our mission is still the same. Our heartbeat is still the same, but at the same time, we don’t wanna hinder the uniqueness of every artist that’s coming out the label.”

GAWVI had nothing but praise for the Reach Records co-founder, who has crashed through the glass ceiling of what it means to be an MC with a Christian perspective.

“I think Lecrae is doing a phenomenal job in his career, who to connect with,” the producer says. “Even the way he presents himself. He’s a classy guy. I look up to him a lot. He’s made some amazing impacts in our culture of Hip Hop and music.”

It was through the Grammy-winning rapper that GAWVI connected with Rodney “Darkchild” Jerkins, who took him under his wing. He says he was “blown away” by being in the presence of gold and platinum plaques from Whitney Houston, Britney Spears and Justin Bieber. Jerkins helped his mentee understand how to perfect the sound for a genre other than Hip Hop.

“Rodney taught me something really amazing where he taught me what is to create a pop song,” he says. “Learning how to give room for a vocal to breathe on a track. A lot of times producers, we want to try to impress people with our production skills and do the over the top production, too much noise, the drums are crazy every single second and then there’s not even enough room for you to understand what’s going on with the singer. He was amazing at telling me how to break down a song. Like ‘Hey have a consistent melody, let that melody be the main focus so that the chorus gets around that then the vocalist can complement it.’ Rodney is amazing, it was amazing working with him.”

GAWVI translated that lesson onto his first solo EP, Lost In Hue. The four-track project is a taste of EDM with a message of embracing life and love. Lost In Hue premiered as the top Dance project in the iTunes store upon its July 29 release.

“I was a little bit shocked,” he says of the fan response. “‘Cause you know I do come from the Hip Hop background so I was a little bit nervous releasing a pop album that’s EDM, so I was like ‘People are going to hate me for doing this,’ but I really wanted to follow my heart because that’s what I just loved.”

He explains that the project is inspired by his personal background growing up around different cultures and musical influences.

Lost In Hue is also a play on the saying “lost in you.” There is a theme of love throughout the EP, which GAWVI says is a tribute to his wife of two and a half years.

As he furthers his presence beyond Hip Hop, he is looking forward to working more with the EDM community to promote positivity. The producer personally does not use drugs and is hoping to show fans that you don’t need to use dangerous substances to enjoy the music.

“My shows are all about great vibes and having fun so I think there’s a shift in culture,” he says.

GAWVI says that he sees people seeking positivity and this is evidenced by DJ Khaled‘s immense popularity with his inspirational messages. He details a recent trip to one of the popular EDM festivals where he was encouraged by an uplifting set from one of the performers that he says exemplifies his point.

“A lot of these songs are so positive about being uplifted in life and even to a point where coming from a Christian background, some of them were kind of like gospel songs where it was like, ‘We lift you up higher,'” he says. “And I was wondering if something major was happening in his life where he’s communicating different messages in his songs and I feel like people are seeing that and they’re feeling that.”

GAWVI is now working on a second EP to be released September 9, which will be followed by his debut album. He says he is enjoying the successes he has gained by putting everything into his music, but is looking forward to much more. He might be a long way from grabbing coffee for Pharrell, but he takes nothing for granted and encourages fans to do the same.

“Every day I surrounded myself with people that wanted to do music because I wanted to know all about it,” he says. “I was just so involved. People that just started they think it can come overnight. I think people need to put in the dues and allow the time to really work hard on their craft and then something will happen. The right connect will happen and the stars will align.”