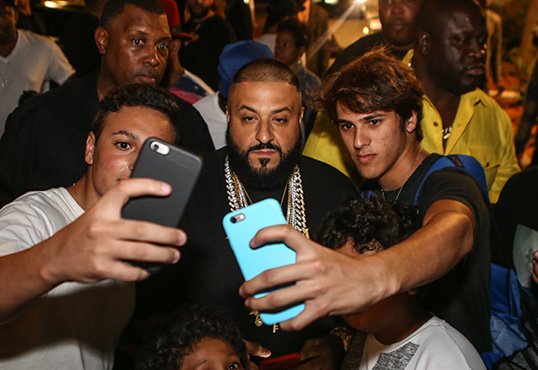 DJ Khaled’s fans will help him move 67,000 – 72,000 album equivalent units of his ninth studio album, Major Key, according to early sales projections.  The Miami DJ will be challenging Drake’s VIEWS for the top spot on Billboard’s Top 200 albums chart, a feat Gucci Mane and ScHoolboy Q couldn’t conquer with Everybody Looking and Blank Face LP.

But it seems that Khaled has plenty of affirmation as he wrote an exclamation point and key emoji-laden message to his fans (who he dubs “fan luv”) on Facebook, thanking them for their support throughout his career.

Fan luv where do I begin to thank you for your consistent support. For inspiring me to be the best I can possibly be. For giving me the strength it takes to go out in the world aka the jungle to bring you the best possible version of me. Fan luv over the years we have become closer as a family.

He praises his loyal supporters for sticking with him through thick and thin.

Over the past 10 years of We The Best Music I have had my ups and downs but one thing never changed. And that is the support and love from my fans. When I say I do this for you I mean it. It inspires me to see that you are inspired by my energy. It inspires me when I go out in the jungle and fan luv shows up in the thousands to celebrate what we’ve accomplished.

He then closes with an inspirational message of hope.

Fan luv I tell U I over came many storms! I tell u this for a reason because I know many of u going through hard times but I promise u don’t give up and stay focused and over come the storm I promise u there’s sunshine on the other side !!!! They don’t want u to prosper or progress so make sure u prosper and progress !!! Fan luv thank u so much for your support for MY ALBUM #MAJOR? thank u for giving me the LUV TO MAKE #MAJOR? I luv u !!

His album came out last Friday (July 29), and features some big-name appearances on it, including Drizzy and Guwop as well as Future, Jay Z, Nicki Minaj, and way, way more. The track that features Nas has been met with high praise.

Read all of the letter here.