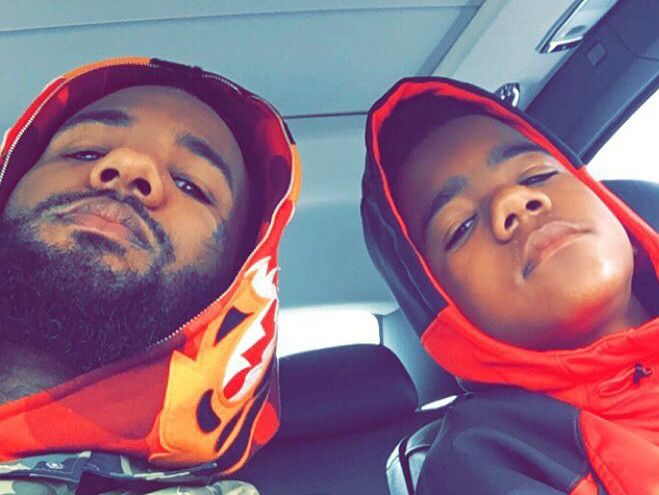 The Game's Son Raises More Than $50,000 For Arkansas Police Officer

The Game has taken the lead in seeking reconciliation between the Black community and police. Last week, he and Snoop Dogg brought a group of men to meet with the LAPD to have an open discussion about the state of the country.

Like father like son, The Game’s 13-year-old son, Harlem Taylor, started a GoFundMe to support Officer Tommy Norland. The Compton, California rapper took to Instagram to explain that they found out about the cop’s work through the social media site.

Officer Norland is active in the Black community in Little Rock, Arkansas. His Instagram shows photos of him playing with the children and laughing with the elderly.

In his post, The Game uses Officer Norland to disprove stereotypes of cops and says there is a difference between bad cops and good cops.

Racial tension in America is high after two Black men, Alton Sterling and Philando Castile, were shot and killed by police officers last week. Five police officers were then killed in Dallas at a Black Lives Rally.

The Documentary rapper addresses any potential criticism from those saying he should donate the money himself. He says he donated the first $1,000 and wanted to empower his son by allowing him to set up the GoFundMe and invite the public to join him.

The Game does his own charity work through The Robin Hood project. Leading up to the release of The Documentary 2, he gave away $1,000 a day to fans. He also donated $1 million to the city of Flint, Michigan in the midst of its water crisis.

At the time of publication, one day after the campaign’s initiation, more than $53,000 has been raised to support Officer Norland.

To donate to the GoFundMe for Officer Tommy Norland, click here.

View social media posts from The Game, Harlem Taylor and Officer Norland below:

Good morning world…… So as I told you yesterday, I had conversations with my oldest son @hvrlemtaylor about good cops & bad ones & he did his research & found officer @tnorman23's page & i was touched by how active he is in the black community where he polices. My son said, how does he help all of these kids & stuff, is he rich ??? I said I don't know if he's rich but sometimes it doesn't take much to help those in need son…… Being that my son is on vacation with his mother visiting relatives in Atlanta, Arkansas & Louisiana he wanted to do something for officer @tnorman23 in Little Rock so he delevoped a #GoFundMe to try & raise $10,000 so that officer @tnorman23 can stuff his trunk with toys, goodies, food & other things to help him continue contributing to the kids & people in Little Rock Arkansas….. (& BEFORE SOMEONE NEGATIVE PUTS IT IN THE COMMENTS BELOW, YES I COULD'VE GIVEN THE 10K MYSELF BUT THAT WOULDVE STOLEN THE JOY OUT OF MY SONS IDEA & HIS COMMITMENT & DEDICATION FOR SOMETHING & SOMEONE HE FELT TOUCHED BY). But as I type, I AM GOING TO DONATE THE 1st $1,000 !!!!!!!! Not only am I proud of my son for taking initiative, I'm thankful that I've raised him with such a pure heart regardless of the negativities he's seen me over come…… So please CLICK THE LINK IN MY BIO & donate anything as small as $1 to the officers mission & together we will help a good soul continue being a super role model for other law enforcement & a life saver for the children of tomorrow…… As soon as the $10,000 goal is reached… The funds will then immediately be transferred from my @therobinhoodproject account by my charity's manager @ilndprncss to officer @tnorman23. "It takes a village to raise a child" & this good cop is going the extra mile for a lot of young African American children… #BlackLivesMatter to more than just #BlackLives #AGoodSonForAGoodCop #StayCommitted [Tag as many people to this post as you can & FOLLOW officer @tnorman23 NOW….. I'm really amazed by what he is doing !!!] again… PLEASE CLICK THE LINK IN MY BIO & contribute ANYTHING you'd like… Let's see @hollywoodunlocked & @theshaderoom post this ?

Thank you dad for donating the 1st $1,000 of your money to my go fund me !!! I love you & appreciate you so much for helping me start this campaign for officer @tnorman23 !!! He is the best cop out there & people need to know it #AGoodSonForAGoodCopb