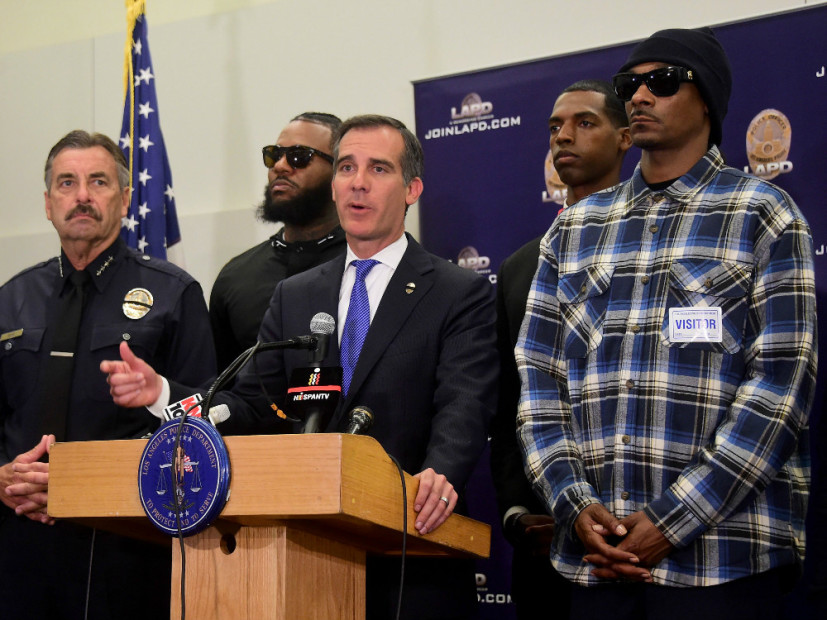 Los Angeles, CA – The Game and Snoop Dogg put their words into action today as both West Coast legends led a peaceful rally called H.U.N.T., an acronym for “Hate Us Not Today.” They led a group of men through the streets of Los Angeles to the police station where they spoke with LAPD officers.

“Live and direct,” the Doggfather said in an Instagram video. “Finna get some dialogue with the LAPD, the new recruits, the graduating class of 2016. This is how you make moves, man. You make it happen. You get some dialogue, some understanding with the new recruits before they hit the streets so that way they know that we, just like them, we trying to live and go home and get some understanding, so we advise you all to do the same. Follow protocol.”

In response to the violence, The Game made the announcement for the rally on his own Instagram page, calling all men of any color to join him and Snoop in walking to the police headquarters. “LEAVE ALL WOMEN & CHILDREN AT HOME… THIS IS OUR MISSION FOR THEM,” he says in his caption.

He reinforces the necessity for the protest to be peaceful and advises the attendees to leave all weapons and illegal substances at home. The Compton, California rapper says that the goal of the meeting is to triumph over fear and to create unity.

“Objective: to make the Californian government & it’s law branches aware that from today forward, we will be UNIFIED as minorities & we will no longer allow them to hunt us or be hunted by us !!! Let’s erase the fear of one another on both sides & start something new here in the city of Los Angeles, a city we all love & share !” he writes.

He continues that this is only the first step in truly solving America’s problems, but emphasizes the importance of taking the first step.

“I LOVE EVERY ONE OF YOU & WE OWE IT TO OURSELVES & OUR FAMILIES TO BE MEN & TAKE A STAND MY BROTHERS.. THE TIME IS NOW,” he says.

Problem joined in and brought Dunkin Donuts to help nourish the troops.

@problem354 is a good brother… 1st on the scene to help mobilize & give brothers that positive energy for this demo !!! #HUNT #HATEUSNOTTODAY #HUNTUSNOTTODAY

Once the group arrived at the headquarters, they met with Police Chief Charlie Beck and Los Angeles Mayor Eric Garcetti, according to the Los Angeles Times.

“We all have to live in each others’ skin and recognize that we all have other challenges,” Beck said. “It’s not about placing blame. … L.A. is not about violence. We want to stop it from happening.”

“We want it to be not just about words,” the mayor said about finding change.

View the social media posts for the H.U.N.T. rally below:

#Repost @losangelesconfidential with @repostapp ・・・ Operation H.U.N.T Meet NOW at Joe's auto park parking 1221 west 3rd street Los Angeles California 90017 Calling: ALL AFRICAN AMERICAN MEN, MEXICAN AMERICAN MEN & any other RACE of REAL MEN with heart to stand with us today & walk peacefully to the LAPD headquarters. [LEAVE ALL WOMEN & CHILDREN AT HOME… THIS IS OUR MISSION FOR THEM] Do not: bring any weapons or anything illegal. Do not come high or belligerent.. We don't need any HOT HEADS or anyone there for the wrong reasons… We will stand as we are, UNIFIED. I'm calling ALL GANGS, ALL RACES, ALL GROWN MEN affiliated or not & WE WILL STAND UNIFIED tomorrow !!!! Our numbers are all the weapons we need !!! We do not need to be dumb, retarded or uncivilized tomorrow… ALL WE NEED IS EACH OTHER… I will not lead any of you into a trap !!!!! Objective: to make the Californian government & it's law branches aware that from tomorrow forward, we will be UNIFIED as minorities & we will no longer allow them to hunt us or be hunted by us !!! Let's erase the fear of one another on both sides & start something new here in the city of Los Angeles, a city we all love & share ! There are many things that have to be done to rectify this situation that has plagued us for hundreds of years & UNIFICATION is the 1st step !!! I'm asking for ALL of my AFRICAN AMERICAN, MEXICAN AMERICAN & any other AMERICAN who has the heart to STAND WITH US to meet us at the above address & take the 1st step into altering our future for our children & our FAMILIES….I LOVE EVERY ONE OF YOU & WE OWE IT TO OURSELVES & OUR FAMILIES TO BE MEN & TAKE A STAND MY BROTHERS.. THE TIME IS NOW – The Game ? @derekdidit

Operation #HUNT… We are doing this the right way. Thank you @losangelesconfidential @snoopdogg @problem354 for stepping up as leaders and taking it beyond social media.