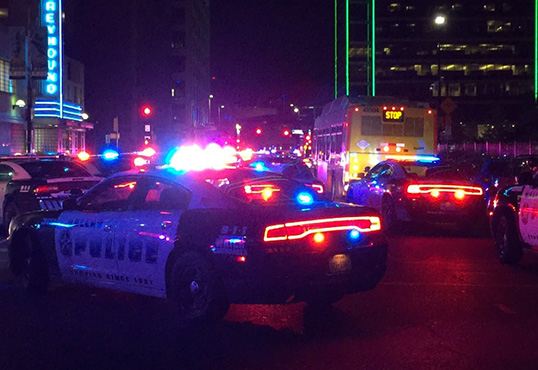 Dallas, TX – A Black Lives Matter rally in Dallas, Texas turned deadly on Thursday night when at least one sniper opened fire on police officers, according to a statement from Police Chief David Brown. The bullets were said to have been coming from above the rally, just before 9:00 p.m.

Five officers were killed and seven others were wounded, reports the New York Times.

Two civilians were injured, including a woman at the rally named Shetamia Taylor who was hit in the leg and treated.

This is the only person shot, who wasn't an officer. Shetamia Taylor was hit, then shielded her son from bullets. pic.twitter.com/dp7gmNB2nK

Police were still looking to confirm the number, identity and motive of the suspects hours after the shooting.

Overnight they were negotiating with a suspect cornered in a parking garage in downtown Dallas who continued to make threats and claimed there were bombs planted around the city. Initial reports said that the suspect killed himself to end the standoff, but in a Friday morning news conference, Chief Brown clarified that he was killed by an explosive device delivered by a police robot. “He said he was upset about the recent police shootings,” Chief Brown said. “The suspect said he was upset at white people. The suspect stated he wanted to kill white people, especially white officers.”

An extensive sweep of the downtown area by police has discovered no additional explosives.

Brown said in an earlier press conference that the investigation was ongoing. “We still don’t have a complete comfort level that we have all the suspects, so we will continue a very, very rigorous investigation and search of downtown … until we are satisfied that all suspects have been captured,” he said.

The law enforcement agency released an image of a person of interest earlier, who turned himself in. He was reportedly released from custody several hours later.

This man, once named a person of interest, was just released from police custody.#dallasofficersshot pic.twitter.com/PPsRVcMYfT

Another person was reportedly in custody after a shootout with SWAT officers. DallasPD Twitter updates said police found a suspicious package near the second suspect’s location that the Dallas bomb squad was securing. Chief Brown said a woman had been detained near the garage.

Police also stopped a Mercedes on the highway that an officer had seen speed off after a person with camouflage bags got in.  The two men were reportedly released after being questioned by police. WFAA News reported that the driver said he was picking his brother up at the bus station downtown and that the bags were his luggage. In a news conference that happened around the same time, Chief Brown said the two were in custody.

Driver at traffic stop on 35&Kiest says he was just picking his brother up from bus station downtown when DPD chased them down. #wfaa

Driver and his brother were just released #wfaa

The scenes coming out of the city on social media show the chaos on the streets.

MANY gunshots heard in video I captured in #Dallas, just before 9p as rally marched through downtown @wfaachannel8 pic.twitter.com/1O3GB0b9xx

Protesters had been peacefully marching through the downtown streets to rally against the killings of Philando Castile and Alton Sterling.

Castile was killed by an officer during a traffic stop in Minnesota on July 6 and a live video of his last moments was posted on Facebook by his girlfriend and circulated widely on social media. His death came one day after Sterling was shot and killed by police in Louisiana, an incident that was also caught on video and went viral.

Their deaths have reignited the ongoing debate around police brutality and racism in America, with many members of the Hip Hop community weighing in.